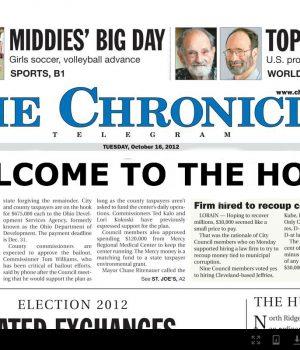 The Chronicle Telegram of Elyria, Ohio, is a go to for most residents in Lorain County. It arrives to the doorstep of an estimated 15,000 and can be found in almost every single store front and restaurant from the city of North Ridgeville to Lorain.  The Chronicle was the first newspaper company in Elyria and has roots dating all the way back to 1829. To this day the paper provides many residents with their daily fix for local news & sports.

However, not everyone is entirely satisfied with the counties largest newspaper publication.  Scumbagged spoke with a long term subscriber from Lorain who said that enough was enough already.  “After I read the latest article, I just shook my head, these guys don’t even know how to phrase headlines anymore”.

The article that’s being referenced is in regards to Mr. David Hardy Jr., the new CEO of the Lorain Public Schools.  The Chronicle Telegram was granted an interview with the optimistic and energetic Mr. Hardy on Thursday and asked him a barrage of questions related to the questionable selection process that took place and what his objectives would be as the newly elected CEO.  Mr. Hardy had a plethora of things to say, but out of the entire context of the interview The Chronicle Telegram singled out one specific line, a line that for many, crossed the line.

“First i’ll get under the hood’

When “The Chronicle Telegram” published the article to it’s online website, they also included a YouTube video, which as of this posting had a whopping 75 views.  The lackadaisical performance of the article isn’t due to disinterest by residents in the school system, but rather it was due to a pathetic choice of wording. 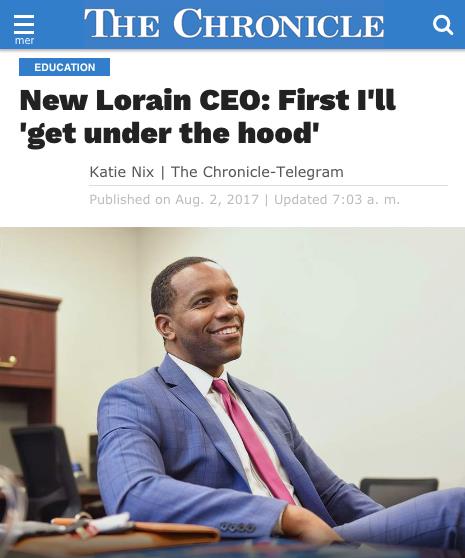 Instead of an appropriate title, such as “Newly Elected Lorain School CEO Promises Change”, or perhaps “Lorain Public Schools Find A New Champion In David Hardy Jr.” they decided to go with “New Lorain CEO: First I’ll Get Under The Hood”. Now, the majority of people who read or will read that title had an immediate picture planted in their minds.  First they saw the word “Lorain”, then they saw “Hood” followed by a well educated black man in a suit and tie.  The impression that the verbiage portrays is one of someone who is going to get hands on with “the hood”.  They even failed to mention what he was CEO of ?‍♀️.

Another Lorain County resident who isn’t actively subscribed to The Chronicle, but reads articles online daily said “Not only did they botch the title, but they clearly were biased against this guy.  Citing numerous times within the article about the selection process and making it appear like he wasn’t qualified to be here.  I don’t know what kind of mindset they go into when it comes to writing these articles anymore, but clearly they don’t know what the hell they are doing.  My 13 year old son could have come up with a better title than that.”

Clearly Mr. Hardy Jr. is not in Lorain filming a remake of John Belushi’s 1987 “The Principal” where he would take on thugs, dope boys and gang-bangers in the hood.  Mr. Hardy Jr. has been hired to simply get things situated and hopefully turned around for the better.  He’s going to be analyzing all of the interconnected workings within the school system and develop a game plan with those that he elects moving forward.  He’s in Lorain to fix things like he did in the St. Louis Public Schooling system and to get things moving in the right direction again.  The “hood”, however, has absolutely nothing to do with his job.

Cobra says:  The Chronicle Telegram is filled with the most misspellings in the history of any major publication not to mention garbage editors.  As a result, their ratings are currently in the dump, they get poor views on content, and even their social media following is being rivaled by a 2 1/2 week old website ahem…. Scumbagged.com (see the comparison in thumbnails below).  Not to mention they force viewers to participate in surveys in order to read an ad, have advertisements filled up the ass from fake polls from newsmax to skyliners, header, sidebar & footer ads.  Raking in extreme profits and producing a poor product in return.  They’ve turned into the worst kind of scumbags, lazy ones that cornered the market. 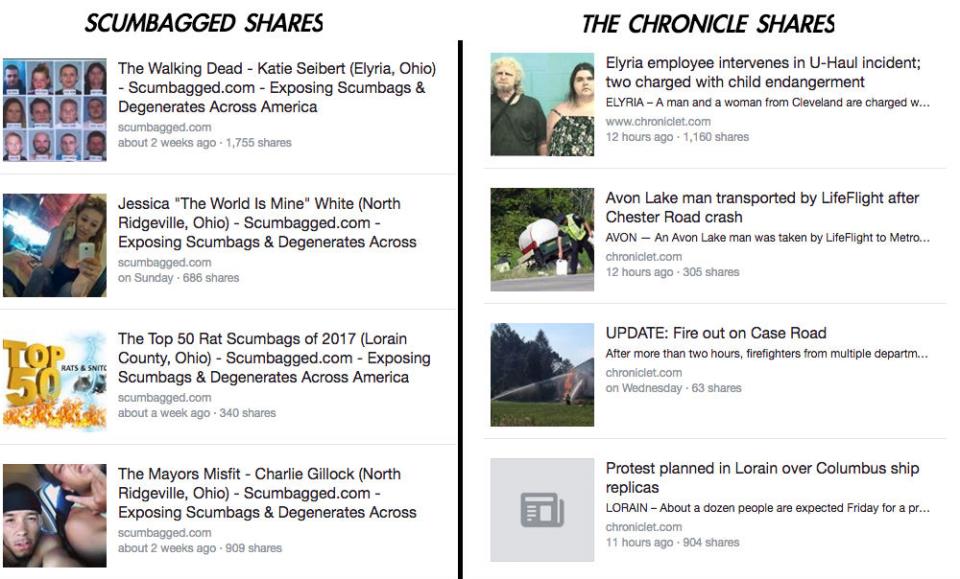 SCUMBAGGED Tip:  Stop being so melodramatic already, it’s time to revamp your publication process, hire proper editors and start acting like a news organization again.  The articles that stream through are generic and sadly misrepresented in so many different ways.  The problem is that there hasn’t been anyone to call you out on it until now.  Stop being a bunch of rich, lazy scumbags and start caring about your paying subscribers and the community again, it’s not only the right thing to do, but the smart thing…