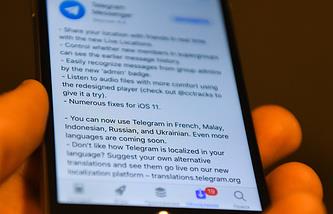 MOSCOW, November 22. /TASS/. Russia’s Telegram messenger has blocked for the first time a channel for broadcasting audio content in violation of author’s rights, Russia’s telecom and IT watchdog Roskomnadzor said on Wednesday.

“The Telegram messenger has for the first time blocked a channel that broadcast an audio content in violation of author’s rights. We will unite efforts in the fight for a legal content,” the watchdog wrote on Facebook.

In October 2017, the Russian telecom watchdog created a digital service for accepting requests from copyright holders on taking measures to limit access to pirated content in the Internet.

This summer, Roskomnadzor said Telegram could be blocked over its refusal to comply with Russia’s legislation. On June 23, Roskomnadzor’s chief Alexander Zharov personally asked Telegram founder Pavel Durov to provide information about the company controlling the messenger.

Durov agreed to include the messenger in the watchdog’s registry of Internet information distributors. However, Durov said Telegram would not provide access to its users’ messages and comply with the demands under the package of anti-terrorist laws (the so-called “Yarovaya Package”).