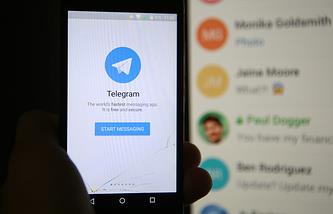 MOSCOW, October 30. /TASS/. Chairman of the Russian Presidential Council for the Development of Civil Society and Human Rights (HRC) Mikhail Fedotov has welcomed the decision of Pavel Durov, founder of the Telegram messenger service, to block extremist channels, the council’s website reported.

Kremlin says Telegram messenger ban ‘not on agenda’ yet

“The HRC chairman welcomes the willingness of the Telegram messenger’s administration to respond to information about extremist channels,” the council said. It noted that on Friday Fedotov asked the Telegram founder to block the channels, which contain bomb-making instructions and calls for terror attacks.

On Sunday, Durov said that Telegram had blocked over 8,500 terrorism-related channels in October. He summed up the general rules of conduct in the messenger. “Criticism of local authorities, the fight against the current state of affairs and political debate – that’s good. However, the propaganda of violence and the call for actions, which can harm innocent people – that won’t do,” Durov wrote in his own Telegram channel.

It is noted that the response to the HRC chairman’s request followed practically instantly. The council’s member Pavel Chikov said Durov asked to send him information on the Telegram channels containing extremist materials to check their content for compliance with the requirements of user agreements. “I see this as another proof that ethical self-regulation online can be much more effective than bans,” Fedotov said in a statement posted on the council’s website.