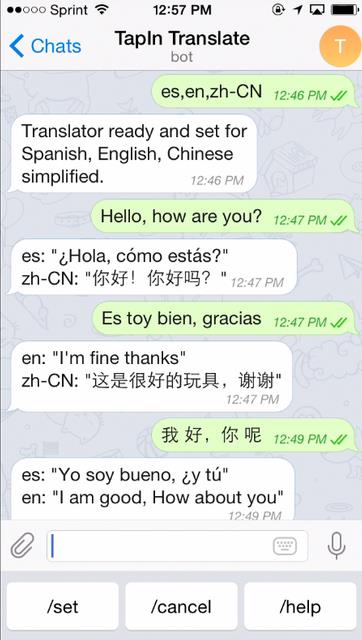 This bot translates all messages entered in your chat to multiple languages. By adding this bot to a chat group, you can chat simultaneously with many users, each in their own language. TapIn uses Google Translate to perform the translation.

Note that you don’t have to set the input language – you only need to set the language you want translated. For example, if you are chatting with two people, one who knows only Spanish and one who knows Chinese. You know some, but are not fluent, in Spanish and German, so you want to see their chats translated to English. Set the translator only to English, and chat messages in Spanish, Chinese (or any other language) will be translated to English. The translator will detect the language and make the appropriate translation. The translator will not translate messages that are entered in the set language – in this example English.

Let’s continue with this example. Suppose the two people you are chatting with don’t understand English. To translate your English messages to Spanish and Chinese, set the languages to English (en), Chinese simplified (zh-CN)) and Spanish (es). All entered messages will be translated to these languages. A sample screen shot is shown below.

The following languages are available from Google Translate. The designated codes are used to set the language in the translator. Use the /help command in the app to show the most current list.

To chat directly with TapIn Translate (without any other users) do the following.

To use TapIn Translate with other users, do the following.