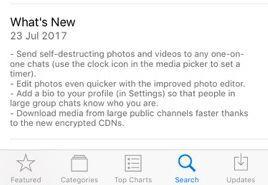 Telegram is the latest app to join the many messengers that have mimicked Snapchat’s disappearing message feature.

The messaging app built its name by being one of the first to offer end-to-end encryption. Till now, it also had a “secret chat” function, offering self-destructing messages in chats designated to be private.

Secret chats on Telegram are different from regular messages, in that the latter can be synced across devices and between desktops and mobiles. Secret chats, on the other hand, are only hosted on the sender and receiving devices, and don’t remain on Telegram’s cloud.

But now, the new feature means regular chats can self-destruct as well.

According to Telegram’s latest update, all you have to do is set a timer and your selected photos and videos will disappear.

The new update also sees an improved photo editor, and lets users speed up their downloads from large public channels.

Self-destructing messages is not likely to endear Telegram to authorities, which has recently come under fire in several countries because of its hard encryption.

Earlier last week, Indonesia blocked access to Telegram on the web, saying it was being used to spread “radical and terrorist propaganda”.

The messaging app later added that it would put together a team of moderators to screen and remove “terrorist-related content.”

WATCH: Google quietly released yet another outstanding feature for Maps