Long Beach police are looking for a possibly armed and dangerous man wanted in a double killing at a Cambodia Town liquor store earlier this month.

Police have already arrested three people in connection with the Oct. 10 slaying of two young men, but they say another gunman is on the loose.

Detectives believe Savanna Sok, a 30-year-old Long Beach resident, may have fled to the San Bernardino or Redlands area with his girlfriend.

Tuesday, police released photos and asked for help finding Sok and his girlfriend, who is considered a person of interest. They also released video of Sok.

Earlier this month, 21-year-old Danny Bunthung and 22-year-old Dallas Som were gunned down at the S R Liquor & Market on the corner of Walnut Avenue and Anaheim Street, authorities said at the time. The gunfire also wounded two more people at the store, police said.

Police have not released any details on what may have motivated the shooting other than to say there was some kind of fight that escalated.

Officers tried to pull over a silver Lexus Om was driving, but he pulled away, police said.

The chase ended when Om crashed at Atlantic Avenue and Pacific Coast Highway where officers arrested him without any more problems, according to authorities. 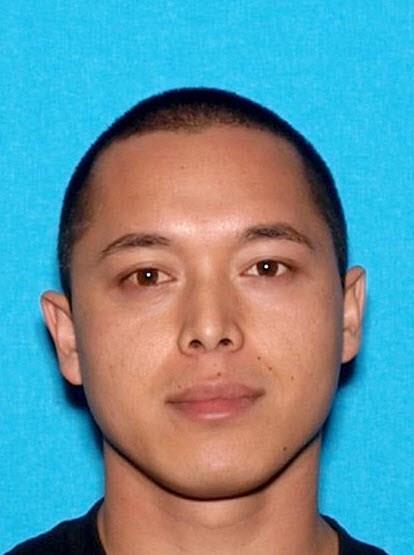 He’s been charged with two counts of murder and two counts of attempted murder, police said. He’s being held without bail, according to authorities.

Later that day, police searched a North Long Beach home in the 5900 block of Walnut Avenue and took a second person into custody, authorities said.

They arrested 27-year-old Tiffany Som, who has since been charged with accessory to murder and child endangerment, police said. She’s being held in lieu of $1.4 million bail, according to authorities.

Tiffany Som is not related to the victim Dallas Som, police said.

Brenda Sok, 24, has been charged with accessory to murder and is being held in lieu of more than $1 million bail, police said.

It’s unclear if the suspected shooters knew Danny Bunthung and Dallas Som before their deaths.

Bunthung’s father, Mike Bunthung, said his son had gone to the store around 9:25 p.m. to buy beer and cigarettes when he was shot, according to KTLA.

Police said Savanna Sok is Cambodian, 30 years old, about 5-foot-9 and 160 pounds, with brown eyes and black hair. Anyone who sees him should not try to detain him, authorities said.

Instead, they should contact homicide detectives Shea Robertson and Oscar Valenzuela at (562) 570-7244. Anonymous tips can also be submitted by calling 1-800-222-TIPS or visiting lacrimestoppers.org.