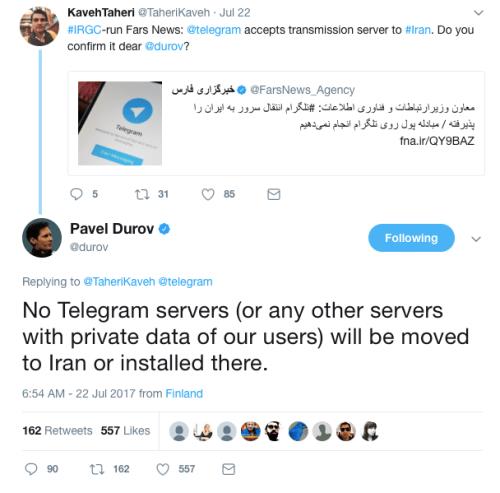 Mahmoud Vaezi, the Iranian communications and information technology minister, was quoted Sunday as saying that Telegram has transferred some of its servers into the country.

“As a result of meetings with Telegram managers, some of its servers have been moved to the country,” Vaezi was quoted as saying by Iran’s ISNA news agency.

But Telegram CEO Pavel Durov denied the claim, reiterating the company’s previous position in a tweet to an independent Iranian journalist.

According to Vaezi, Telegram plans to use third-party caching nodes (CDNs) in Iran.

But CDNs, which services like Telegram do use to make data available faster, “have nothing to do with relocating Telegram servers or complying with unreasonable local laws,” said Durov, according to reports.

In late June Durov agreed for Telegram to be registered in Russia after coming under pressure from the authorities to do so, but said it would not share confidential user data with anyone.