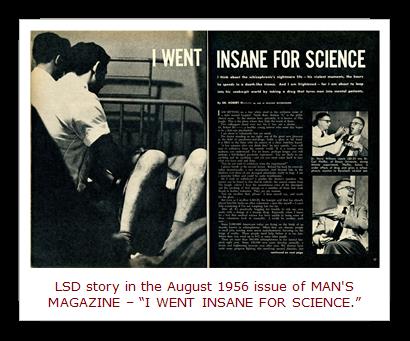 and it was published in the August 1956 issue of Man’s Magazine, one of the classic men’s adventure pulp mags.

This week, I received an email about that story from Dr. Stephen Siff, an assistant professor of journalism at Miami University.

Dr. Siff is currently working on a book about media coverage of LSD in the 1950s and 1960s.

Part of his research on this trippy topic has been featured in Slate magazine and in a fascinating article Dr. Siff wrote for the scholarly publication Journalism History: “Henry Luce’s Strange Trip: Coverage of LSD in Time and Life, 1954-68.”

Dr. Siff contacted me because he’d found a fuzzy photocopy of what appeared to be a reprint of the 1956 Man’s Magazine story about LSD in the December 1961 issue of Man’s Magazine.

The answers are yes, yes and yes.

Some of the men’s adventure magazines had relatively large circulations and production budgets, such as True, Argosy and Stag. But most did not.

To fill up an issue, budget-minded editors of many men’s pulp mags would sometimes reuse stories and artwork that had previously appeared in their own magazine or in another magazine owned by the same publishing company.

In some cases they bought reprint rights from another publisher, for a fee that was smaller than the cost of buying an original story or artwork. A few fly-by-night men’s pulp magazines simply pirated stuff that had been used in other men’s mags.

The writers and artists who provided stories, cover paintings and interior art for men’s adventure magazines typically worked without written contracts and it was usually assumed that they were selling the publishers all rights to their work, including reprint rights. This meant the publishers could reuse or sell their work with little or no additional payment.

Thus, it’s not unusual to see the same cover painting used on or in two or more men’s adventure magazines. For example, the rousing harem scene painting used on the cover of the August 1959 issue of True Adventures magazine, created by the legendary artist Mort Kunstler (though credited under his favorite pseudonym, Emmett Kaye), was later reused on the cover of the January 1963 issue of A-OK for Men. 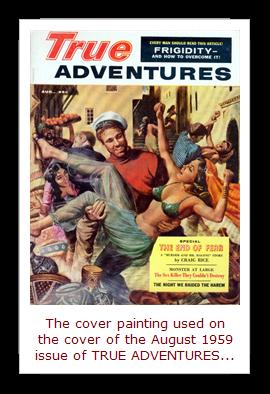 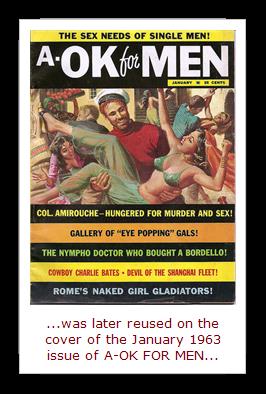 Kunstler’s painting was used again on the cover of the April 1968 issue of Men in Adventure, then recycled as an interior illustration for a story in the July 1970 issue of Adventure for Men. 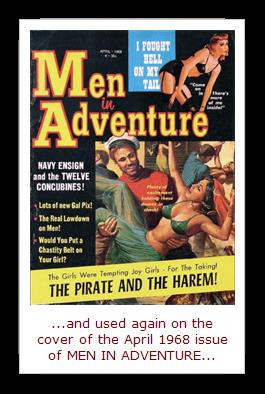 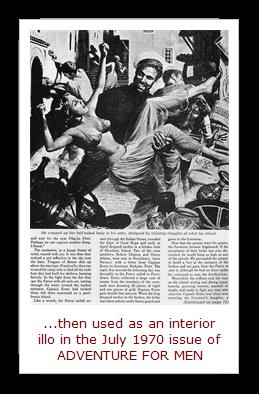 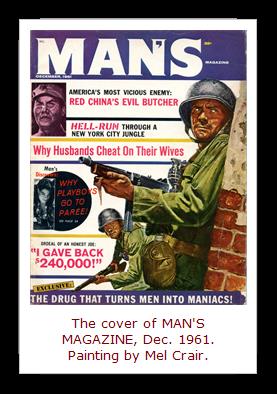 On the cover of the 1961 issue (which features a cover painting by Mel Crair) the story is promoted with a different teaser cover headline: “THE DRUG THAT TURNS MEN INTO MANIACS.” And, the 1961 version of the article uses a different, much scarier photograph for the first two pages (a totally unrelated stock photo that seems to show some poor mental patient being smothered).

But the interior title and text used for the 1956 and 1961 versions of “I WENT INSANE FOR SCIENCE” are the same. And, both versions credit the story to “Dr. Robert H—- as told to William Michelfelder.” (Dr. Robert H—- preferred to remain anonymous.)

William Michelfelder was a serious journalist who primarily wrote for the New York World-Telegram and Sun. His story about LSD focuses on the way it was being used in psychiatric research in the 1950s. At that time — and even in 1961 when the story was reprinted — public awareness of LSD was not widespread.

It wasn’t until the mid-1960s that LSD started becoming famous/infamous as a recreational drug. In the mid- to late Sixties, public awareness (and use) began increasing steadily, thanks to the promotional efforts of and news about pioneering acid heads like Dr. Timothy Leary and his Harvard buddy Dr. Richard Alpert (later known as Baba Ram Dass) and the psychedelic explosion of the hippie counterculture movement. 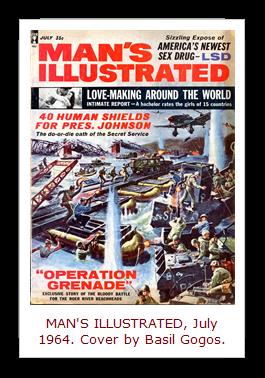 Inside, the story is illustrated with a cool photo, altered by hand to look, um, hallucinatory. And, the title is expanded to: “Sizzling Expose of America’s Latest Sex Drug LSD – THE INSTANT THRILL PILL.”

By the mid-1960s, men’s pulp mags were ratcheting up the raciness of their sex-related stories and cheesecake photos as they tried to compete with the more explicit men’s bachelor slicks, like Playboy, Modern Man, Rogue and dozens of others.

It starts with an anecdote about a pool party in Beverly Hills. Some “handsome young men skin-tight trunks” and some “healthy, hyper-bosom, bikini clad animals of the fairer sex” get high on acid-soaked sugar cubes. When the LSD kicks in, there is “a rapid and indiscriminate pairing off of men and women.” 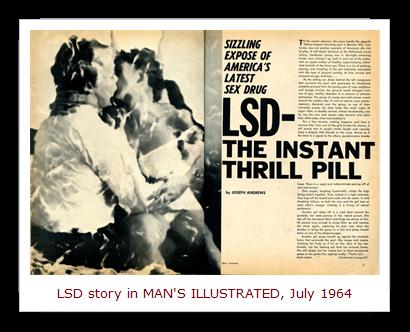 One couple begins to “tear at each other’s meager clothing in a frenzy of sexual excitement.” Others carry on in similar fashion.

Meanwhile, an “unusually well-endowed wench strides out to the end of the low board and dramatically rips off her own bikini top, doing a complete circle for all to see her magnificent body. That done, she begins to untie her panties, screaming out: ‘Anybody here man enough to claim me?’”

“Physically, a person’s sexuality becomes almost limitless — and enjoyable in the extreme — which is one of the reasons why a male LSD user’s potency may last for hours and why a female may often be capable and desirous of having a seemingly endless series of relationships, while under the influence of the drugs.”

Nobody around to have sex with with? No problem. 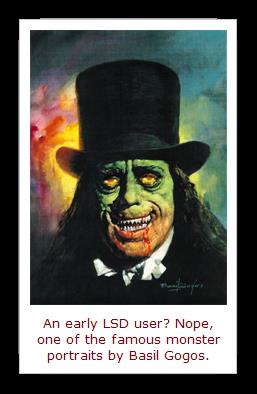 The article duly notes that distribution of LSD was made illegal by federal regulations in October 1962. It also cites police reports saying that LSD was being used as a date rape drug.

Even worse, LSD could make you stop liking sex! “Some people who have used the drug, even under proper supervision, have actually lost interest in sex,” it says.

The article ends by noting that LSD can also cause a few other problems. You know, things like psychosis and memory loss.

So, remember kids, just say, um — what was I talking about? I forget. Damn you, Owsley!

If you’d like to read the Man’s Illustrated article about “LSD – THE INSTANT THRILL PILL,” just click this link to download the entire story in PDF format. (Yer welcome.)

By the way, the action-filled World War II cover painting on the July 1964 issue of Man’s Illustrated was painted by Basil Gogos. Gogos is best known for his classic movie monster paintings, immortalized on the covers of Famous Monsters of Filmland magazine. But he also provided many cover paintings and interior illos to vintage men’s magazines.

In my next post, I’ll show you some original Basil Gogos cover paintings from Rich Oberg’s incredible collection of men’s adventure magazine art.