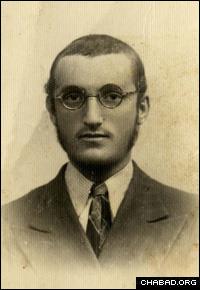 What’s the value of 25 words? For many fleeing the onslaught of Nazi forces during World War II, and their families throughout Europe and beyond, a simple telegram was the only way to stay in touch with loved ones. They transmitted a priceless message, that for that moment in time at least, the sender was safe.

Delivered for free by the International Red Cross – a service the organization continues to provide to refugees today – most of the telegrams made it to their destination. But in one recent case, it took 68 years and the help of a curious Dutch archivist for a crumpled form to arrive into the hands of a Holocaust survivor’s descendants.

Addressed to Chaim Meir Bukiet, a young Chabad-Lubavitch yeshiva student who had made it out of Europe and was living in Shanghai, the telegram, dated April 23, 1942, was likely one of the last messages sent by Bukiet’s parents before they were claimed by the Nazis. It was written by Moshe Stiel, a Dutch Jew living in Schevenigen, Netherlands, who it seems acted as a middleman for those caught in occupied Europe and the refugees scattered across the globe.

Just six months prior, Bukiet and other students escaped Poland for Lithuania at the behest of the Sixth Lubavitcher Rebbe, Rabbi Yosef Yitzchak Schneersohn, of righteous memory. There, they secured visas through the benevolent acts of Japanese consul Chinue Sugihara, and travelled across Russia by train.

“Your parents in Chmielnik send warm wishes and want you to know they are healthy,” Stiel wrote in the telegram. “Please report what news of your health can be shared with your parents.”

The telegram, sent through The Hague, reached Bukiet three months later, on July 19. He quickly wrote back on the back side of the telegram.

“Delighted about the news. Thank you. I’m healthy, my brothers, too. From Grandfather, good news,” he wrote, delivering a coded .message indicating that his fellow students were with him, and that the Rebbe had made it safely to New York. “Would be glad to hear from my parents very soon once again.”

Bukiet sent the telegram back to The Hague, and the Red Cross sent it to Stiel, but by the time it arrived, he and his family had already been deported by the Nazis to a transit camp, where the Red Cross attempted to forward it. The message arrived on Feb. 27, 1943, just three days after Stiel was sent to Auschwitz, never to return.

Following the war, Bukiet became a rabbi and dean of the Central Lubavitch Yeshiva in Brooklyn, N.Y., teaching tens of thousands of students over a career spanning more than 50 years. Earning a reputation as a scholar, he also authored volumes on the Talmud and insights on the Torah.

The telegram made it back to The Hague, where it sat in a box amidst others at the Red Cross’ vaults, until archivist Raymund Schutz stumbled upon the forgotten correspondence nearly seven decades after the events that claimed Bukiet’s parents and Stiel. Schutz took to the Internet to track down Bukiet, coming across an article on the Jewish Web site Chabad.org written by Bukiet’s grandson, Rabbi Dovid Zaklikowski.

Zaklikowski, director of Chabad.org’s Lubavitch Archives division, and Schutz worked together to fill in the missing parts of the story, resulting in an article in the Netherlands’ The Telegraph newspaper and a first-person account in Chabad.org. 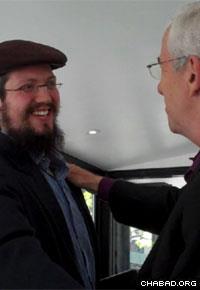 Stiel enlisted the help of Teresa Pollin, a researcher at the U.S. Holocaust Memorial Museum in Washington, who scheduled a meeting between Stiel and Zaklikowski. Last month, the two grandsons whose grandparents never met, but shared a bond in the form of a piece of paper, sat down in New York City.

The four-hour meeting was deeply emotional for the pair. Stiel was able to see his grandfather’s handwriting for the first time.

“This text, written in his handwriting, is the closest I’ve ever gotten to my grandfather,” said Stiel, whose family’s photographs and other mementos were all lost in the war.

At the same time, he continued, “it’s not every day that you meet someone whose grandfather was one of the last people assisted by my grandfather.”

For Pollin, the event crystallized the self-sacrifice of Stiel, a man who, like his other co-religionists, was marked for death by the Nazis, but went out of his way, travelling for hours to The Hague and back, just to transmit a message for a couple that he most likely had never met. 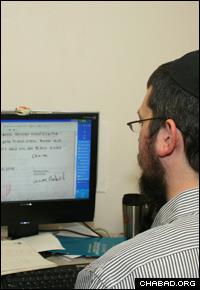 He added that he was inspired to meet Stiel.

“It was amazing to meet someone who has been through so much and has spent his life reconciling what he went through,” he explained. “He has been holding on to such an interest in his grandfather, and has been looking for how to bring him into his life.”

Stiel notes that the Bukiet telegram helps personalize the enormity of the Holocaust.

“We need to remember,” said Stiel, “that while we say that six million people were murdered, each one of them was an individual who had their own story and their own world that was destroyed.”