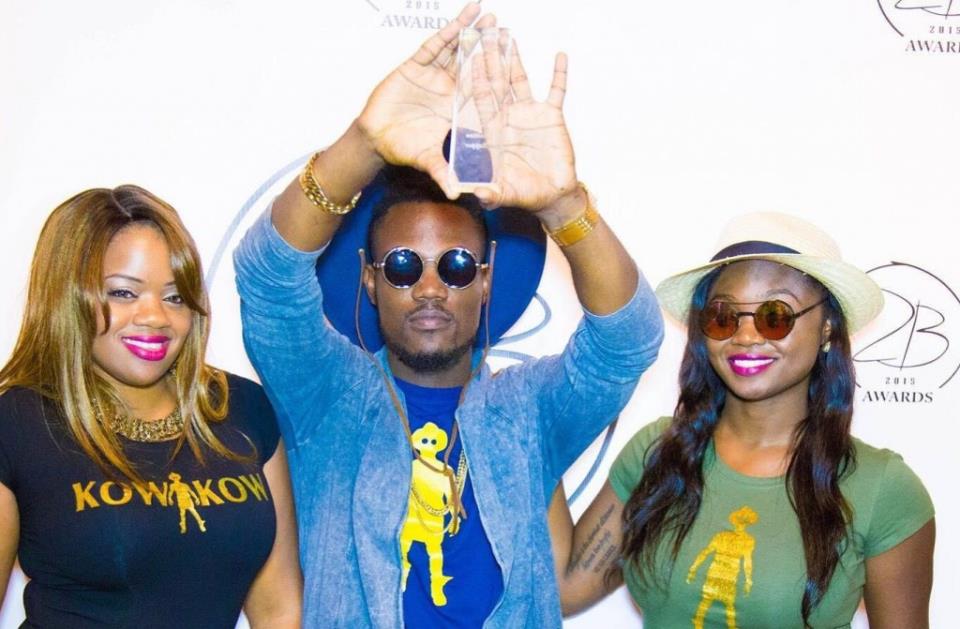 Online, Kowkow likes sharing unusual videos and photos on his page. Millions of people from many nationalities, share his work and his dreams without even really knowing the character nor his past.

For one reason or another, odd or not,  the local Haitian press lacks to speak of this rapper who has been floating for a while now the national Haïtian bicolor flag in the city of Uncle Sam. He is not invited in the popular media station shows in Haïti, his work is not selected in local playlists … Weirdly he is systematically under-promoted and lacks exposure localy from the media stations.

Recently most Haitians have been introduced to him on the TV screens with the video tribute in honor of Black Alex’s death by Roody Roodboy ft Kowkow ( Black la Imotel ), yet one of his videos in collaboration with Ciyou Paradoks had already collected more than a million views online, which is huge for a Haitian clip.

In a recent exclusive interview for Mag Haiti, Kowkow speaks a little of his life, his achievements and his vision.

Mag Haiti: Kowkow, Hello and thank you for giving us some of your time. Please, can you introduce yourself to the fans of the magazine?

Kowkow: Hi everybody and all the fans of Maghaiti. I thank you for this opportunity. I’m Frederick Davidson, better known by the name Kowkow which actualy means (King Of Words) x 2 which makes (Kowkow). I was born October 4th of 1990 in St. Marc. I completed my Primary grades there and I did my Secondary grades in Port-au-Prince. I remembered that I was a good poet then and still am to this day. In 2008, I returned to the United States and I continued with College to get my License in administration; now I’m wrapping up everything to get my diploma. I started writing songs in 2010 but I truly made my first steps in music in 2012 as a singer. I did not have much experience then yet I managed quite well on social networks to promote myself.

MagHaïti: Tell us a little more about your experience in the music business and how was your first appearance to the public?

Kowkow: I really started singing in 2012. I was then 22. I started with the group Energy Crew with artists like  Black Mpwell, T-Push, Normal Danger, Jerry Best, Kepi, Blast-Muzik and myself. I made my first studio experience with them. After the ending of this group, I decided to move solo. My role models as far as artists are Wendy, Doc Fila, G-Bobby, Steeve Brunache and King Posse. When I started my career, many Haitian artists found my style and methods odd, even the way to sold my name was controversial! They said I bragged too much and that I was pretending to be an international star. There even were some who even managed to attack me physically! It took me some time but I think that I am Finally having a great experience now in the Industry. Smitty IProduce, CEO of Trillion Records, who is actualy the head of my artistic production is doing a great job by making these great videos for me.

Mag Haiti: What have you already done in the Haitian Music Industry?

Kowkow: I’ve made 4 songs and 4 freestyles which all were available on video for a total of 8 clips in my catalog. I have also some collaborations with Ciyou Paradoks (Mwen Pa Chanje), with Romeromania (Vis Ta Vie) and with Roody Roodboy ( Black la Imotel). I won my first award for ” Best Writer ” in 2013 competing against Jay Beats and Alan Cave. I managed to get more votes online and I won! I also won the award for ‘Best Artist’ in 2015 for the ZB Orlando Awards.

Mag Haiti: Currently you are the most popular Haitian artist on several social networks, including Facebook with over 3 million fans. What explains this popularity? What’s your secret?

Kowkow: The key is to focus on our objectives and to use all available means to sell our products to the public. Several artists are mainly satisfied to make great songs and neglect their images, while music is a package and all the other aspects are as important as the Hits. On that point I can say that I am a role model for other artists. Since they benefit of a bigger fan-base in Haiti, they use my slogans, my lyrics and my style for more exposure. I dont get bothered by It too much. Since my creativity level is higher then most, I come with some new things to make a difference cause I am sensitive for my Image. That’s my secret!

Mag Haiti: Is this popularity is financially profitable?

Kowkow: Yes! I use my popularity to make money on the web, besides I dont have a job shift so I manage to live only from the profits of my musical activities. I also have my own clothing line and my own brand of sun glasses, visit www.teamkowkow.com for any updates. I cant complain realy cause through music and my presence on social networks I have a house, a nice car and I live peacefully …

Mag Haiti: According to you, why the local press is not talking about your works despite your huge success on the net?

Kowkow: I cant honestly explain this behavior because I dont really know the Haitian medias and how they do business with Artists. My label Trillion Records, will soon look into this problem for boosting up my promotion level and exposure in the local press someday soon.

MagHaïti: How does the Haitian Music Industry market reacts towards you? Did you used to perform in Haiti?

Kowkow: I have performed in Haiti just last year during the summer holidays in Jacmel. There are offers but often Haitian promoters do not really make me suitable arrangements and even less that could put me in value. But I do a lot of performances in Miami, Hollywood Live at Moca Café …

Mag Haiti: We noticed one of your pictures alongside Fetty Wap, is it just a fan pic or are you about to work together?

Kowkow: I have a very good relationship with Fetty Wap. He is one of the most accessible and available American stars in the Business market. Hopefully I believe he will be on one of my futures projects. However, as many other international artists, this remains to be confirmed. I have musical projects in English and some in Creole also, yet at least 80% of my work will be internationaly oriented. Business wise, we believe it will be an excellent strategic choice. 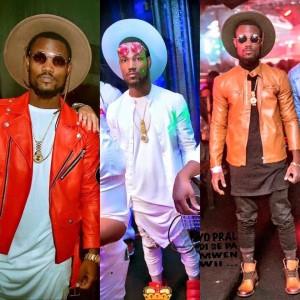 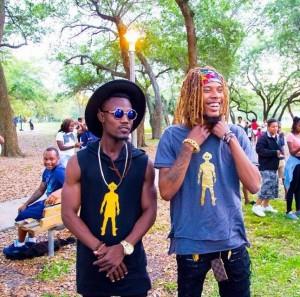 Mag Haiti: After Ciyou Paradoks, Roody Roodboy, with how many artists and producers have you worked with?

Kowkow: I also worked with Toby Anbake, Shishie, Roody Roodboy. These songs will be published soon. I worked with a gospel singer called Youdène Delphin. The song ” Jistis pou yo ” is also dedicated to the suffering of our fellow Haitians in the Dominican Republic. Regarding the producers, I worked with Valery Lezin, who works at ” Best Definition Studio ‘. I have also been with Mo69 Beats, a young talented beatmaker who lives in the Dominican Republic.

Mag Haiti: Can we say that the American public consumes more of your works then the Haitian public?

Kowkow: Unfortunately i will answer Yes because I’m not yet welcomed in my country and I have not yet gain their trust. This is one of my biggest regrets to note my absence on the musical scene in my hometown St. Marc, I would have liked to be an icon as Zomò.

Mag Haiti: What are your plans for this year?

Kowkow: I have Big plans for this year with a lot of collaborations. A new song, which will be video-shooted, is planned to come out soon. Both a mixtape in Creole and another in English will be available in stores before the end of 2016.

Mag Haiti: With all this popularity on social medias, do you think that you will be the first young Haitian rapper to become a millionaire in the HMI after Wyclef?

Kowkow: I will not say that I’ll be the first millionaire because many other Haitian rappers put in as much work as me and are very disciplined. I rather think it will be soon. My opinion is that winning millions is not that complicated, we just have to work hard to sell your products to as many people as possible. Some even think that my Facebook page is packed with fake robotic fans because the Haitian mentality rejects the idea of having such a young Haitian Artist to reach that level.

Mag Haiti: Since you evolving in a different artistic environment, according to you, what changes should be made in the HMI?

Kowkow: We are on a good track, but there are many things to improve. For example the new talents must be framed and channeled to ensure their careers. Artists must also understand that it is thanks to their contributions that radio stations pay animators, they need each other, while also needing to invest in their own promotion. Producers values must be reconsidered, it is imperative that rappers stop copying beats online. The media must also act without bias and censoring mediocre and vulgar products.

Mag Haiti: What about the issue of copyrights, is it not a major handicap for the Haitian music industry?

Kowkow: This is a serious point. In the United States an artist gets paid whenever his work plays on the radio. He gets also paid for the text of the song if aired. It’s just dimes and nickles but adding several cents, on a bigger scale, will give a considerably huge amount. In Haiti, the artist perceives nothing and yet his songs are freely used by anyone. This is also a sad reality for the Haitian Music Industry.

Kowkow: I hope that Haitians will start believing in their potential and pursue their dreams. I also invite all my supporters to follow me on Facebook: KOWKOW, on Instagram: KOWKOW305 and on Twitter: @ KOWKOW305