Writing in an encrypted chat room, Islamic State sympathizers and militants hailed Saturday’s deadly attacks in London and typically called for more such carnage throughout Europe and the West.

Breitbart Jerusalem obtained access to correspondence posted in a closed chat group that utilizes the encrypted Telegram messaging service. The group serves as an internal Twitter of sorts for IS jihadists and sympathizers, and has been used in the past to issue IS communications.

No group has claimed responsibility for the terrorist massacre in London yet in which seven people were murdered and dozens more were injured near the London Bridge and Borough Market.

The attack was carried out mere hours after an IS-linked news service had posted a message on Telegram calling for supporters to “gain benefit from Ramadan” and “kill the civilians of the Crusaders. Run over them by vehicles.”

The Telegram messages following the attack – as obtained by Breitbart Jerusalem – were full of similar incitement.

IS member Abi Abdullah Almasri (the Egyptian), wrote, “Thanks to Allah, thank you, thanks to Allah, Allah is great, thanks to Allah from faith that he will make his promise reality and give victory (to the faithful). Allah will bless the lions. Allah will bless the lone wolves. Allah will reward you as long as you run over and stab these infidels in the depths of their countries. Put fear into their eyes, increase your hits, increase your attacks, don’t let them feel secure in their countries.”

Another Telegram account under the name of “The Chechen Syrian” wrote in the group: “We wait impatiently for such news. We wait for the official media of the Caliphate to bring us more such tidings on the actions of these lone wolves in the infidel countries as they turn these countries into military bases and sow fear among them with the help of Allah.

“The infidels don’t feel safe despite having the newest planes, missiles and guns. A number of lone wolves have turned the centers of their lives into a hell that’s burning them. Our brothers have sworn to turn Europe into a military base. May Allah bless your graves, you lone wolves.”

Abou Alfarouq Omar then wrote, “Thank Allah before and after. Sheikh Osama (Bin Laden), may Allah receive him as a martyr, said: ‘You won’t be safe as long as the children of Muslims and the faithful don’t live in safety.’ These were the just and sincere words from the mouth of a leader who was convinced that Allah will grant us victory. Today our brothers are realizing his (bin Laden’s) will with minimum resources and knives and are turning the infidel and atheist countries fighting against the religion of Allah and the Muslims into a huge destruction, with the help of Allah.”

Abou Qatada Almosuly wrote, “Whoever thought that the killing of Muslims in Raqqa and Mosul would pass without punishment was deluding himself. These infidels must pay a heavy price, even if those who committed the attack in London aren’t from the Caliphate, then as lone wolves.

“We will exact further cost not with knives and car-rammings, but with bombs and explosives and the moment will come when our suicide attackers disappear in the cities of Europe. Our children and our families won’t be alone in paying the price and their blood won’t be the only blood spilled. All the planes and warships won’t prevent the infidel countries from paying the price. You will find we have strength that you haven’t met yet and you will see more attacks that will continue as long as you continue to bomb the Muslims and the faithful.” 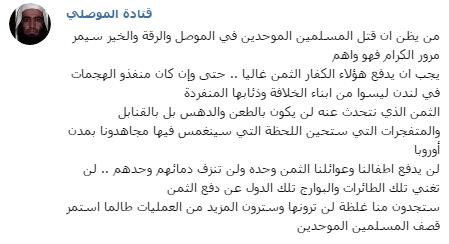 The New York Times reported on the timeline of Saturday’s London attack:

• In the attack, the men drove a vehicle onto the sidewalk on London Bridge, striking several pedestrians, around 10 p.m. local time, according to London’s Metropolitan Police Service.

• The police said the vehicle left London Bridge and drove to nearby Borough Market, where the suspects got out and began stabbing people, including an on-duty British Transport Police officer who was responding to the scene at London Bridge. The police said he received serious but not life-threatening injuries.

• The police said they shot and killed the three male suspects in Borough Market within eight minutes of receiving the first reports of an incident on London Bridge.

Ali Waked is the Arab affairs correspondent for Breitbart Jerusalem.