I’ve been using Telegram for years. All is well, but some time ago one strange detail began to confuse: from time to time Telegram independently added unknown people to my contacts, accompanying it with a notification that they registered with Telegram. In general, Telegram should not show the phone numbers of people who are not in your phone book, but for such spontaneous appearances I saw a phone number. Everything looked as if they were contacts from my phone book. But they were not there. Then I decided that Telegram automatically adds to my contacts those people who added my phone number to their phone book. Since my phone number was listed on a small site several years ago, I decided that one of the few visitors added me to my phone books for some reason, and it looked plausible. But as Telegram became more popular, such incomprehensible contacts became more and more, as a result, they became even larger than the people I know. I began to doubt that all these people could add my number to their phone books, so never without calling. Even more confusing were the names of the users – it looked like it was using a different name than the user specified to himself, and the name by which this user could be written to the phone by an unauthorized person, because there were specific notes and prefixes there.

I contacted one of these contacts, and my fears were justified: 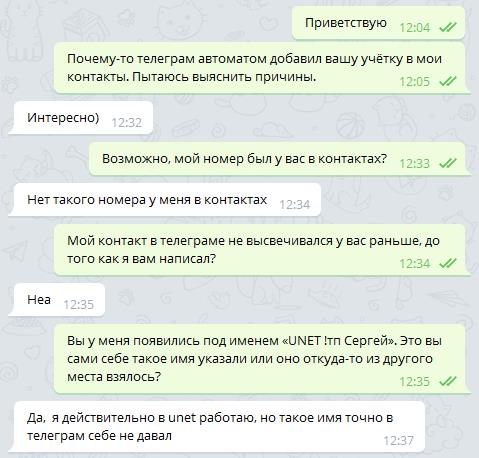 I knew that one time my friend worked in UNET. But to connect it with these strange contacts did not come immediately. It took some effort to recall one curious moment from the past. About a year ago, my phone suddenly stopped seeing the operator’s network. Everything else worked fine, so I assumed that the failure was not in the phone, but the SIM card itself, which was already more than 10 years old, went out of order. Just a visit my friend peeped, and we completely without back thoughts decided to test the phone’s performance with the use of its SIM-card. The phone turned on, found the network – it became obvious that you need to ask the operator for a new SIM-card. Another minute – and the SIM-card returned to the phone of its owner. The next day I already had a new SIM card, and I safely forgot that this small inconvenience was the place to be.

And now, a year later it turns out that there were contacts on that SIM card, and Telegram has managed to implicitly store them on its server in some hidden list that it uses to automatically add contacts, and which for some reason is never cleared. This list includes all contacts to which Telegram could reach at least once in the past. It’s not just about contacts in the phone book. With equal success, he remembers and those who were once added to your Skype (and apparently someone there had a phone number), and even if you have long deleted this user in Skype – Telegram still stores this information with him, And will automatically add this user to your contacts when he joins Telegram.

One would think that Google’s syncing of contacts could be quirky, but no. Google maintains its list of contacts and does not arbitrarily “steal” them from other sources. But just in case, I checked to see if Google had copied contacts from my friend’s SIM card to myself – no, there are only contacts that I personally added.

A small survey showed that several friends also faced a similar problem. The most frequent scenario – someone allowed on his smartphone to his friend to log in under his Google account for some purpose. After that, of course, this account was deleted from the smartphone – but Telegram remembered other people’s contacts forever, and began annoying the automatic sharing of unknown people with contacts with their smartphone.

Among my acquaintances there are Telegram fans who defend Any decision made by the developers, and they also began to protect such unexpected behavior of this messenger. However, I strongly disagree with this. This zealous collection of contacts can lead to very unpleasant consequences. For example, maybe you would not want someone to know that you have a certain number in your phone book. Or to some number you can specify some extravagant name, which is not for prying eyes. In my opinion, this mechanism should be reworked in such a way as to notify and add automatically to those Telegram contacts only those people who are in your phone book at the moment, without any shadow and eternal lists.

Besides Telegram I have Viber installed, and he also announces that someone from the phone book has joined. But at the same time he does not “remember” the contacts that accidentally lit up on this phone a year ago. This mechanism should work similarly in Telegram.

Vote for the solution of this problem!

I did not find a separate bugtracker for Telegram as a whole, so I created a ticket in the bug tracker of the desktop version of Telegram. Also you can remind Pavel Durov and Telegram team about Twitter about this problem. The more people notice the problem and express dissatisfaction – the sooner it will be resolved.

Below is the survey. I recommend that you look into your Telegram contacts (Menu → Contacts, not the chat list) and check to see if there are any people unknown to you. It is possible that in the past, you accidentally merged someone else’s contacts into your Telegram, and did not even pay attention to it. If you do not use Telegram – just click on the “Abstain” button.