Love them or hate them, there’s no denying that chatbots are in the spotlight right now. While their utility is promising, some say chatbots are far from reaching their true potential. To get some more clarity on the subject, we conducted a twitter poll asking for developers’ take on bots. The result? There was nearly a tie between two responses: “bots are just hype” and “bots complement apps”.

We decided to dive even deeper into the debate by sitting down with two developers who shared their thoughts on the present state and future of chatbots: Joseph Zibara, CTO and Founder of Underlabs who has developed more than 20 Titanium apps over seven-plus years, and worked with Apple on an indoor location app for Montreal’s airport; and Flavio De Stefano who works for Caffeina and started learning to code at 16 years old. He has experience as a full-stack developer, building APIs using Laravel and building highly-scalable Node.js applications. Flavio is a core Titanium contributor.

What do you think about all the recent hype around bots? Is it overplayed?

Joseph Zibara: Bots are not new. The first phone answering machines with number pad prompts were the primitive versions of today’s AI Chatbots. Once semantics and machine learning were added to chat thread responses, the immense training that comes with a specific set of domain questions resulted in today’s AI chatbots. The more questions and answers bots get trained on, the more the answers get precise.

Flavio De Stefano: The first thing I thought when I saw the recent evolution of bots within messaging apps was that they were natural successors of terminal commands. Sometimes, user interfaces are confusing. Each OS provides its own paradigms and guidelines, and to make matters worse, apps do not always respect them. The result? The user is confused and has to learn new UI behaviors every time.

Apple made a great step forward with iOS forcing developers to use OS UI controls and gestures and introducing app reviews, but bots have a more common thing that no one has been able to provide yet: natural language. So, my answer is no. They’re not overplayed. They’re the future because they can easily replace some basic operations that can be traced to input–output.

What are some of the most interesting use cases for bots that you’ve seen?

JZ: Bots as they stand today need to be specialized for certain requests for a specific task. I have played around with “Operator,” a new app that seems to do a good job finding products to purchase like electronics and shoes. However, after three questions for a search on “wireless headphones,” the app fell back to a real person with about a ten-minute delay.

FDS: Right now, I see two primary uses: where bots are used as a fallback to another feature that isn’t available, or they are used in order to get notified about something. For example, the GitHub for Telegram. I use it to receive new issues or PR and to answer when I’m not at work and I only have my mobile phone. The main use case of bots is alerts. I simply don’t want to install an app of several megabytes on my device with features I will never use if I just want notifications.

Do you consider bots a threat or a companion to apps? Why?

JZ: They are companions to apps. I imagine them replacing a customer support tab or a search bar within an app, but not more. Even then, a fallback to a real person is currently still necessary, as teaching your AI engine all the possible questions and scenarios is a time-consuming task. AI chatbot services have their place in the app world, but I personally do not believe that they will replace apps—at least not any time soon. Underlabs.ca posted a tweet the day Facebook Messenger launched their chatbot. I had to mention my location in three different ways and still was not able to get the answer to my very basic question: 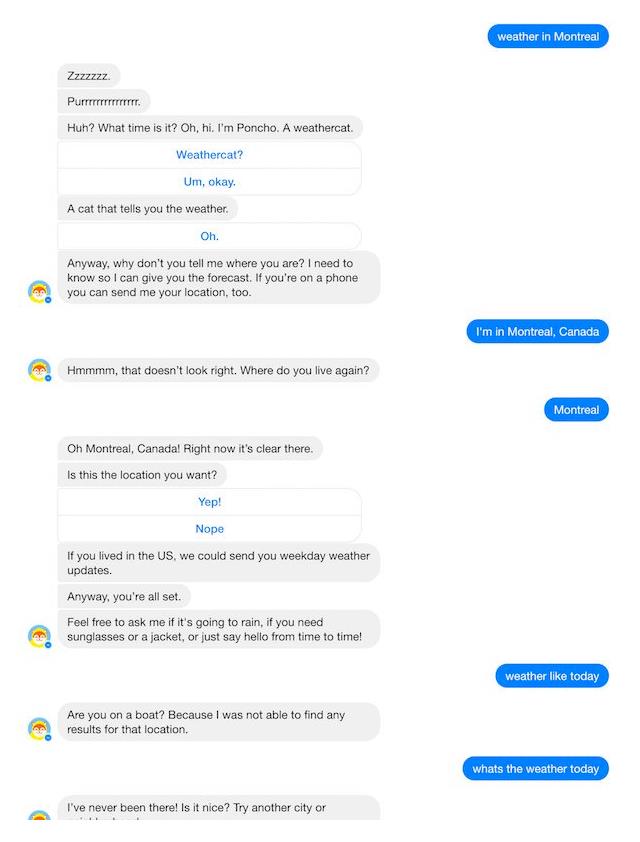 FDS: Bots are apps. I don’t understand why bots should be considered a threat. Of course they’re a different type of app, but the concept behind an application is to perform a series of tasks to accomplish something, and bots can easily do that in a new way with a better, minimalistic interface. When I build an app, I spend about 60 percent of the time building the UI and thinking about the UX, and it shouldn’t be like that. It’s crazy. We should focus on the app’s features, instead.