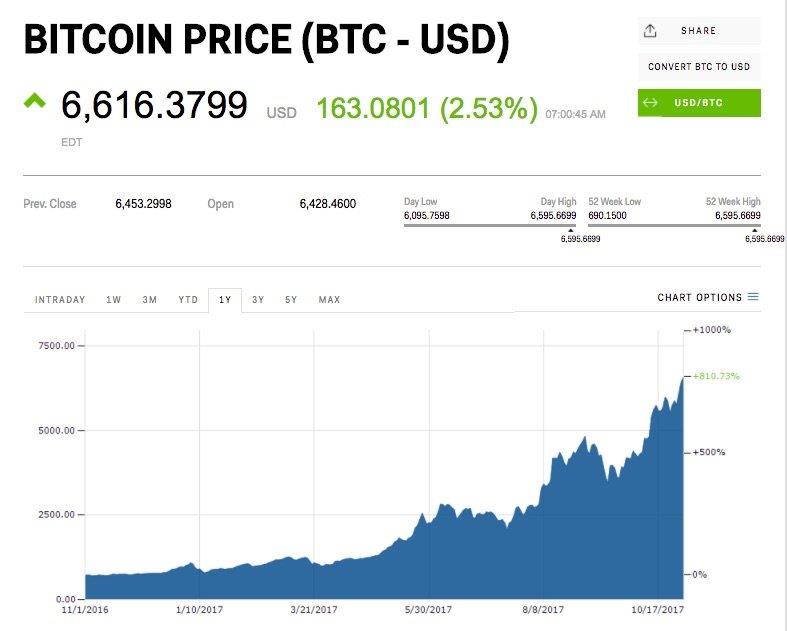 Bitcoin continues to post record highs, climbing above $6,500 and then $6,600 for the first time on Wednesday.

Bitcoin has been continually posting record highs of late, breaking through $6,300 and $6,400 for the first time in the past few days.

Wednesday’s rise appears to be a continuation of Tuesday’s rally, which was sparked by news that the exchange operator CME Group was planning to introduce bitcoin futures.

Mati Greenspan, an analyst with the trading platform eToro, on Wednesday said: “Not only is this a monumental testament to the belief in bitcoin and the demand in the market but it will also boost the liquidity by opening the market to many more interested players.”

Bitcoin traders in Telegram chat rooms are also speculating that this week’s bull run is partly helped by a coming “fork” in bitcoin’s underlying software. The SegWit2x software update is scheduled for November 16 and could split bitcoin in two, creating a new currency. This has happened in the past with bitcoin cash and bitcoin gold, and in those cases bitcoin holders got those new coins free. As a result, investors may be piling into bitcoin in the hopes of a SegWit2x dividend.

Bitcoin has been on a tear in 2017, rising by over 500% against the dollar this year. The price rise has been driven by increasing mainstream adoption and awareness of bitcoin and cryptocurrencies more generally. At least 55 cryptocurrency hedge funds have sprung up this year, many of them focusing on bitcoin.