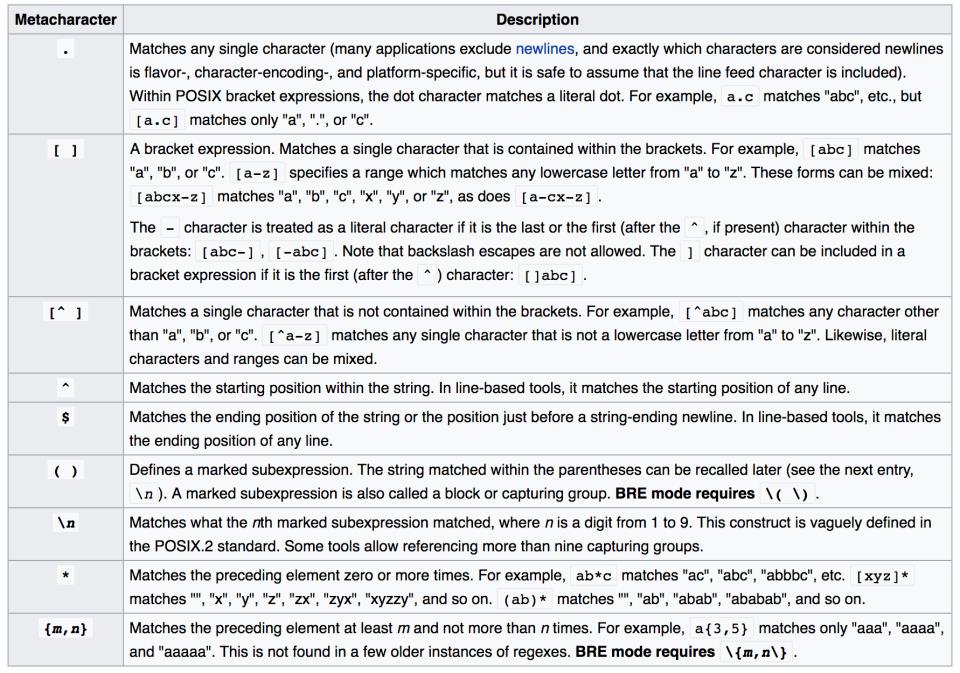 “a sequence of characters that defines a search pattern”

We can indeed use regular expressions to look for patterns, sequences of characters we are interested in, in strings or text files. If you are totally new to the concept, this can be difficult to grasp at the beginning. However we promise that once you get it, you will love it and a whole world of exciting possibilities opens up.

You can use them to “parse” text files in search, for example, of particular sequences or chunks of characters, and set those aside for further analysis. Imagine parsing a text file with thousands of FASTA sequences and taking out all the sequence IDs for some particular purpose.

Or you can perform a smart “search and replace” in a text file, way more powerful than what we saw already with explode(), as while explode() works with very precisely defined substrings or characters as delimiters for string splitting, a regular expression can look for a way more loosely defined pattern that will allow us to catch matches with substring those exact sequence of characters we do not know beforehand.

In the analysis of biological entities such as nucleotide or protein sequences, special linear (sequence-based) patterns are very often linked to interesting biological functional properties such as for example the ability to interact with proteins in order to form complexes or for other regulatory reasons. Just think about how gene promoters are rich in transcription factors binding sites, that can often be defined by loose linear patters, that determine if and how much a particular gene will be expressed in a certain cellular environment.

All of this will become more clear by looking at the examples shown below in this section and maybe just a little bit of practice.

Here is a summary of the most used metacharacters, thanks to Wikipedia:

The PHP preg_match() function, basic use

Let’s get into some practical examples to be better grasp what are regular expressions and how you can use them in the PHP programming language. We will slowly introduce a few metacharacters as we proceed.

To better understand the following example:

Here’s the output of the script above:

The target string is Hello, world

Regular expression 2 did not match

Regular expression 4 did not match

Regular expression 8 did not match

This is the output of the script:

Extracting the FASTA header line from a FASTA sequence

In the following example we obtain a FASTA sequence from the UniProt web site with file_get_contents() as described previously. We use explode() to split a FASTA sequence into it’s composing individual lines, that will get stored into a $fasta_lines array. We then cycle through this lines array to identify the FASTA header line, that is the one that starts with a > sign, by using preg_match().

Remember that since > is not a metacharacter, it is a regular character that will simply match itself when used in a regular expression.

Executing the code above generates the following output:

The dot . metacharacter matches every character in a string except newlines. The asterisk metacharacter * indicates that the character that precedes it in the regular expression is repeated zero or more times.

The “/.*/” regular expression means “any character zero or more times”. It will match everything, even an empty string. To get a match to a full string, from start to end, you can use “/^.*$/”.

Similarly to the asterisk *, the ? and + metacharacters in a regular expression refer to the character that precedes them, adding a special meaning.

Here’s the output of the script above:

For the less initiated:

Let us write a regular expression that will match all possible cutting sites for the BanII enzyme within a target DNA sequence. In order to use it properly to find all matches within the target DNA sequence we do need a more advanced use of the preg_match() function. Better, we would actually want to use the related function preg_match_all() in order to find all possible matches within the target sequence rather than just the first one, as preg_match() would do.

We will leave the matching to the next section of the book, for now let us just write the regular expression by using character classes:

Hopefully you start to see the power of regular expressions and classes for pattern matching in the analysis of biological sequences here, and this is just a tiny simple example. More on this example in the next section.

With this information you may try to write yourself regular expressions for:

Let us make an example with some humor:

Please feel free to run the code above yourself, play with it and generate variations. What about checking for success with YAHOOOOOOOOOOOO…

We have covered the basics here. We know how to write simple regular expressions and to check if a pattern defined by a regular expression finds a match inside a string. However we still did not learn how to extract from the string what actually matched, which is an essential skill. In order to do that, we need to call the preg_match() function with a third argument. Also, we could add additional call flags to see where exactly the match is inside the string. Last but not least, we may want to retrieve all the matches of the regular expression in the string, not just the first one as preg_match() does, this can be accomplished with the preg_match_all() function. We will start to tackle these topics in the next section, stay tuned!