For those of you who missed the rainbow vomit Snapchat filter, it’s your lucky day. You can now have it forever at a very small price.

On Friday, Snapchat introduced a store for its lenses, the animated selfie filters that were introduced in September. Each one is yours to keep for $0.99.

See also: How to get the most out of the new Snapchat update

To access the store, take the steps you normally would to access the free lenses. Flip the camera to selfie mode and touch your face on the screen until the row of lenses appears. Swipe through them, and the store will be located in the same row right after the free ones.

There are currently 29 lenses in the store, and it looks like many of them are ones we’ve already been able to use for free, including the rainbow vomit face, wrinkled old age filter, the crying eyes, the gossip tabloid overlay and the pink heart eyes. 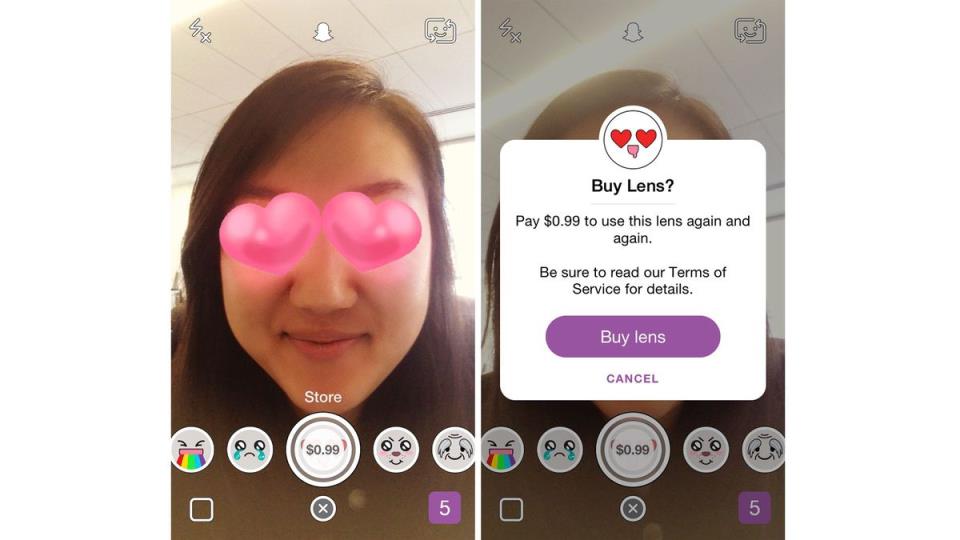 The store is only available in the United States, Canada, the United Kingdom, Australia, Brazil, Saudi Arabia and a few other European countries, according to The Verge. But Snapchat said it will roll out to more countries soon. The current update also includes new emoji stickers, such as the taco and burrito.

This isn’t the first in-app purchase to hit Snapchat. When it launched lenses, it also added extra replays you could get via an in-app purchase. In the same update, the app added a Trophy Case for achievements you reach in the app, such as reaching scores or using a particular feature.

At the end of October, Snapchat also introduced “Speed Modifiers” so users can apply slow-mo, fast-forward and rewind filters to their videos.

BONUS: Why do we love Snapchat so much?