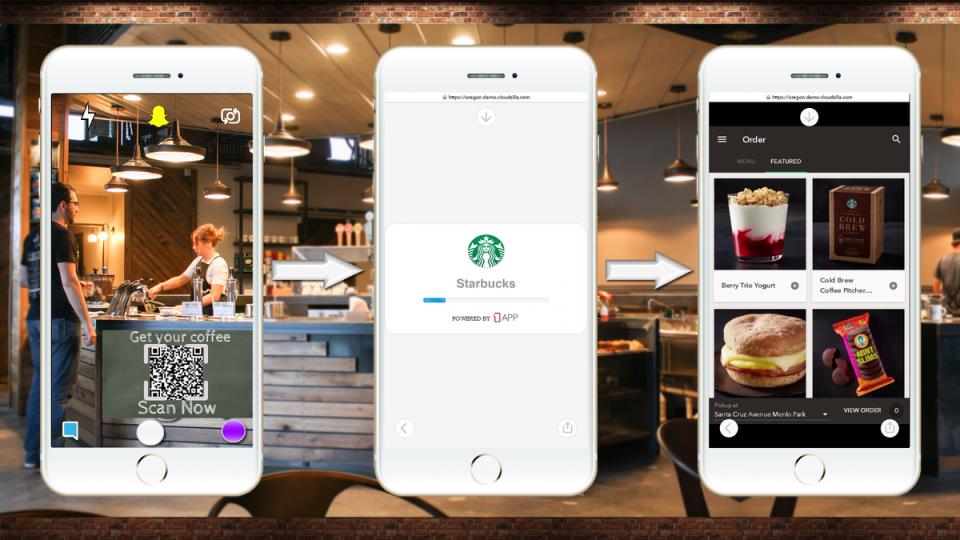 QR codes are dead, an internet marketing strategist wrote in AdAge in 2013. The murderer: “easier-to-use apps.”

And yet, four years later, that isn’t the case. Apps have become even more prevalent and perhaps easier-to-use, but Facebook and Snapchat, two of these most-frequently-used apps, are pushing a present and future of QR codes. Spotify introduced its own codes last week.

It’s difficult to determine how QR codes became “cool” again. Snapchat, the popular app for teens and young adults, may have helped.

Snapchat created its so-called “Snapcodes” in early 2015, where users could create their own and add friends by scanning them. Everyone from publishers like Mashable to presidential candidate and Vermont Senator Bernie Sanders made a Snapcode:

What is this Snapshot thing and why do I only get ten seconds? pic.twitter.com/5RfsywwE2Z

Snapchat didn’t stop there. Now, scanning a Snapcode can unlock filters and animated lenses or open a Discover channel on Snapchat. Most recently, Snapchat opened up the ability for anyone to create a Snapcode to link to any website. Scan with Snapchat and you can open a mobile website while staying in Snapchat.

It wasn’t always like this. When QR codes first rolled out, people had to download special apps to scan them. It was a clunky experience with no payoff. Then, Snapchat made the entire process easier to use by building the reader into its app while simultaneously providing reasons to scan them.

What’s the business benefit? If every website and other cool experiences are QR codes then, there’s no reason for you to ever leave the Snapchat or Facebook app.

The tech that kills kittens

Still, feelings about QR codes remain quite mixed in the era of Snapcodes. After posting a query on Twitter, I received more than a dozen private messages about the subject. At the top level, it seems like people either love or hate QR codes. They kill kittens, apparently:

But when asked directly about Snapcodes, the tone change.

“It was big first week of college actually, quick way to exchange contact info. Everyone held out their phone and was like ‘snap my code,'” Gonen said.

A main concern for some was not having a QR code reader that automatically scanned anytime the camera was open on a smartphone. “I don’t like them because in order to read a QR code, you need a QR code reader. It’s kind of inconvenient to me,” Sam Schmir wrote to me on Twitter.

But that isn’t the case for Snapchat and Snapcodes. Snapchat has created an ecosystem that is encouraging consumers and marketers to love QR codes, again.

Raheel Hasan and his company are at the forefront of the return of the QR code. His company 1APP provides a way for apps to be saved as web-links, meaning you never have to download an app on your phone. Rather, you click on the link and you’re transported to an app-like experience without the burden of storage and data on your smartphone.

The company’s latest development, called InstantScan, brings that experience through scanning a QR code instead of clicking on a link. Last month, 1APP ran a test in Starbucks stores where users could score a free coffee through the Starbucks app, but they didn’t have to have the app.

Instead, Snapchat was the portal:

The results were pretty impressive for 1APP and for Starbucks. According to the company, 27 percent of people (more than 1100 people participated at stores in Stanford, San Jose and San Francisco) who walked in the store did not have the Starbucks app installed on their smartphone but used the app through Snapchat and InstantScan. More than 60 percent of the visitors tried out the experience during the trial period.

“The numbers were incredible,” Hasan said. “At the end of the day it shows the power of Snapchat and the ability to move people.”

“This puts the decision back in the hand of the consumer. I don’t need to have the app on my phone,” he continued.

Snapchat does not work with 1APP on an official basis, but activations like this are only good for the company. Snapchat has been pushing “Snap to Unlock” ads, and several movies, like Power Rangers, have created QR codes that gift Snapchat users with special filters for a limited time.

After this test with Starbucks, Hasan said they are in conversations to do something similar with Whole Foods. For now, they’re focused on Snapchat, but there’s a chance other apps will expand their abilities as a QR code reader.

What works on Snapchat tends to end up as a feature within Facebook. That’s also true for QR codes.

Facebook is testing a “Rewards” feature, where inside the app users have QR codes that participating stores can scan and gift Facebook users with incentives, TechCrunch reported. Facebook’s Messenger also has QR codes for adding people.

And most recently, Spotify is getting into the mix. Spotify’s new experience is limited to songs, artist pages and playlists on the music streaming service. Twitter also has QR codes for people’s profiles.

@kerrymflynn My hate for them is so strong that DMs are not necessary. They are the tool of the tasteless tracking conglomerates that hate their users.

@kerrymflynn My favorite QR codes are the ones in subway stations, where there’s no Internet. It’s like marketing Darwinism.You can quote me

@kerrymflynn At my previous startup, one of the sales guys wanted us to use QR codes for everything. Made everything look old & cheap.

But that isn’t the case overseas. QR codes are a core part of the experience of using the messaging app WeChat, popular in Asia.

“Going to Beijing it was amazing to just know that WeChat could scan any code that I saw and it would add a contact, pay at a vending machine, or open a web page or app,” Tyler Hayes, senior communications manager for Cheetah Mobile, wrote on Twitter. “I stopped thinking of it as a QR code while over there.”

It seems that Snapchat is also making QR codes cool by making them less like QR codes.

“Not a fan of QR codes, who uses these things? I once downloaded an app to scan them but who wants another app. Old technology IMHO,” Lyman Zerga wrote on Twitter.

When asked about Snapchat, he admitted that he doesn’t use the platform.

WATCH: ‘Guardians of the Galaxy: Vol. 2’ is more of the same good stuff