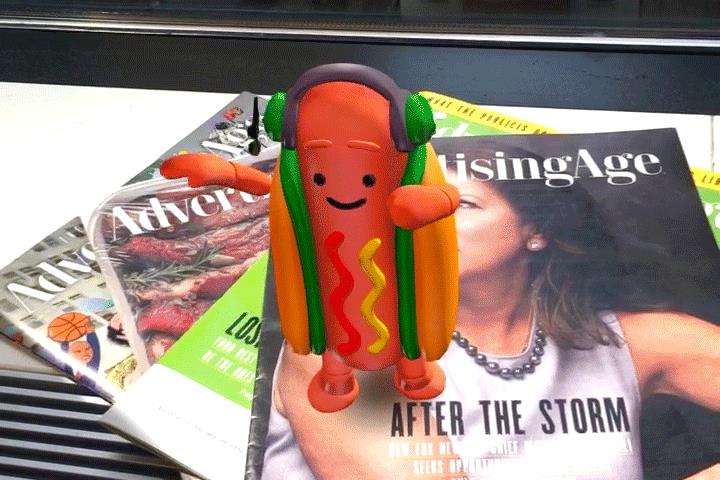 It might not look like much, and its dance moves aren’t even all that, but it is ahead of its time. It’s so advanced, Snapchat hasn’t even gotten around to selling the creature or building one for brands. It is the first character that uses the company’s 3D “World Lens” technology, which renders the bopping brat as a fully formed creature inside the Snapchat camera. People can walk around it, filming it like it was really there.

While Snapchat continues pushing its augmented reality studio to release new project after new project, Facebook, Apple and Google are working as fast as they can to catch that dancing dog, which debuted earlier this month. And there’s nothing frivolous about this augmented arms race.

“There’s all this attention and excitement over what’s really very lightweight AR,” said John Baker, chief marketing officer at Mirum Agency. “And Snapchat can rightfully claim that flag for popularizing the filters and all this innovation.”

In 2015, Snapchat created the first mass-appeal, photo effects that could blend augmented reality and real consumer video. Snapchat Lenses became a part of internet culture as people shared selfies that were comically enhanced or distorted by digital special effects. It’s also where people discovered the fun of “face-swapping.”

Snapchat since turned the selfie technology into advertising gold, charging hundreds of thousands of dollars for one-day lenses to promote brands.

Refocusing It wasn’t until this year that Facebook diverted its attention from expensive virtual reality and Oculus Rift goggles to reveal an augmented reality roadmap that it hoped could challenge Snapchat. In April, Facebook introduced a developer studio to help brands and agencies design augmented reality experiences for company apps from Instagram to Messenger.

“Filters and augmented reality could be the next big ad unit alongside News Feed ads,” Baker said, referring to Facebook’s central river of content.

Facebook worked with NBC Universal on an animated filter to advertise the movie “Minions,” and it showed off an augmented-reality application with Nike at its developer conference in April.

But its AR platform has yet to open widely. In fact, a number of ad agency insiders said Facebook is still beta testing the AR studio and it is being stingy with whom it lets in, despite widespread interest.

“I don’t think there’s a brand team that doesn’t see an immediate application for it,” said Azher Ahmed, director of digital at DDB Chicago, who said he has played around with Facebook’s new AR Studio.

Once it’s more accessable, Facebook’s strategy could represent a real threat to Snapchat because the developer platform gives everyone access to AR, according to Ahmed. Developers have to apply to participate, but they don’t have to promise to buy ads.

“It very much democratizes the underlying technology,” Ahmed said. “It’s not hidden away behind massive media commitments with companies like Snapchat.”

Not only does working with Snapchat cost hundreds of thousands of dollars, but the company controls the process of creating lenses. If Facebook opens the floodgates on AR, it could cheapen the value of, say, that beloved dancing hot dog. And it could give marketers untold new ways to surround consumers with virtual mascots, branded landscapes and more.

Apple approaching Facebook isn’t the only newcomer. The next iPhone will be equipped with even more sensors to make augmented reality even more useful. That means apps well beyond Snapchat or Facebook could offer powerful AR.

Take the tape measure app that Laan Labs built for Apple’s conference this year, when the iPhone maker revealed an ARKit for developers. Laan Labs was behind the original face-swap app, a feature that Snapchat co-opted.

Jason Laan said the lab is playing with a “bunch of little stuff” to make the next viral creation for the iPhone. Laan Labs prefers Apple because there is a clearer path to make money as a developer.

Some brands aren’t waiting for the platforms, Apple or Facebook to deliver the hardware or open their cameras to AR. Last month, Nike built an augmented reality campaign inside its own app to sell a limited edition sneaker. The sneakers were only available by opening the app inside Momofuku restaurants and pointing the camera at the menu to reveal an AR rendition of the sneaker.

Augmented reality is entwined with location, letting brands strike consumers in a defined place, their stores or at events. That’s one of the reasons Snapchat recently built a cartoonish map right into its app: for people to show their whereabouts.

Of course, Snapchat filters have always been a way to take selfies and videos and decorate them with special geotargeted ads.

“The combination of location and being able to do something through vision is incredibly powerful,” said Toby Barnes, group strategy director at AKQA in Portland. “For the longest time people thought mobile phones were just computers in their pockets. But the most important thing is that it can see the world and know where it is.”