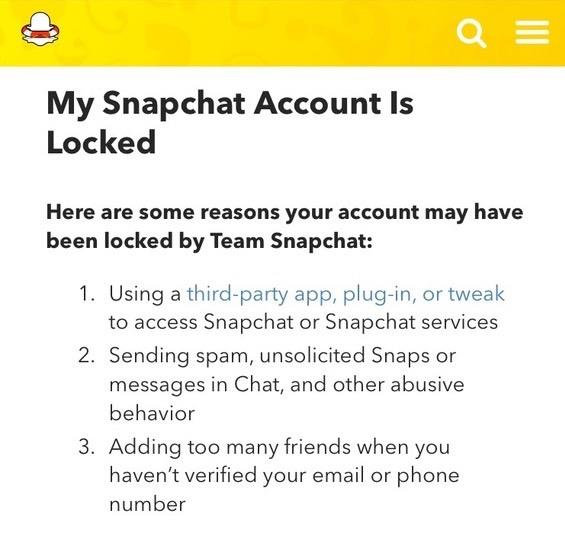 One of the features that make Snapchat so popular is because of its originality. You can almost always be certain that the snaps and stories that people post are taken first-hand from their camera phones.

While there are many face effects and editing tools (filters and lenses) available on Snapchat, the fact remains that all the photos and videos that you see are original and never before seen. Well almost.

Of late, several hacks have surfaced that allow you to upload pictures and videos from your gallery/camera roll to Snapchat. Although, this comes with consequences, there are several people going this. Before we proceed with these methods, I am compelled to first tell you that using third-party apps, plug-ins and tweaks to access Snapchat is not allowed. This is clearly stated on their website. Consequently, Snapchat may lock your account for 24 hours until the third-party app they you use is removed from your phone. Read more about locked snapchat account here in another post.

Continual use of third-party apps to access Snapchat may even result in a permanent account lock. So that’s a heads up you must first understand.

Uploading From Gallery to Snapchat CHAT (iOS and Android)

In its 2016 update, Snapchat introduced the chat 2.0 feature. Instead of merely sending texts, you can now upload pictures from your gallery to the CHAT. You can even send voice notes and short videos.

To upload pictures from your gallery to Snapchat CHAT, you can simply go to your gallery or camera roll and select the picture. Tap on the share icon and select Snapchat. 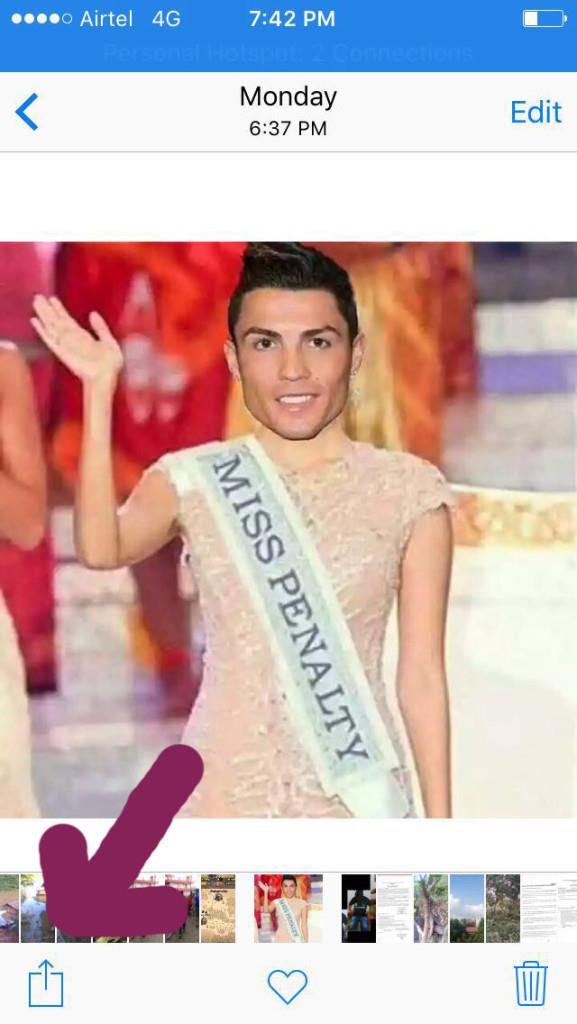 If you don’t see Snapchat, scroll and tap on the more icon (indicated by three dots). 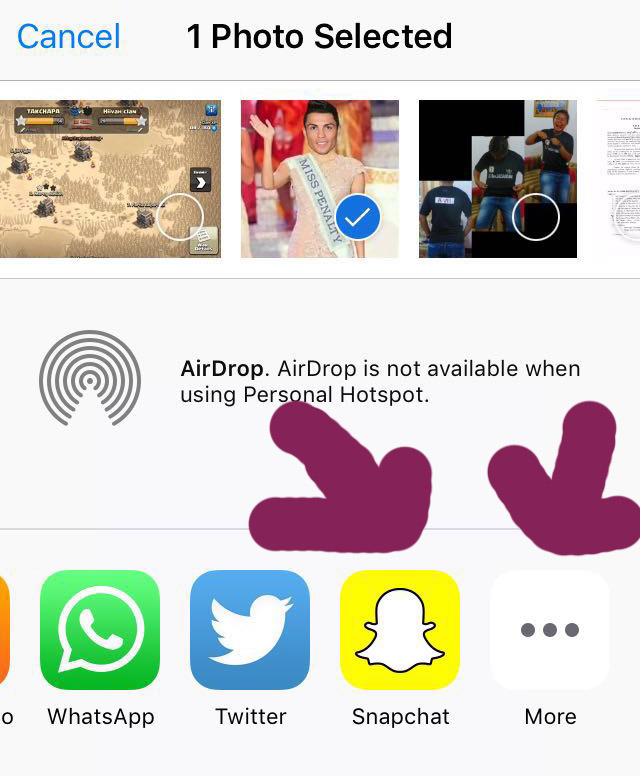 You can make edits, like all snapchat pics — insert texts and smileys. 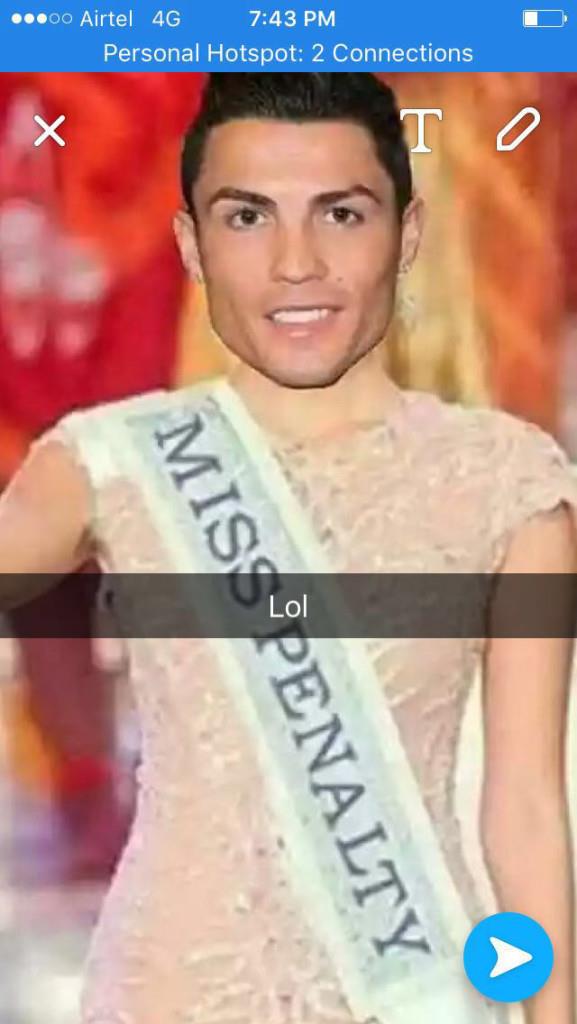 Choose the people you want to send the picture to and tap send. 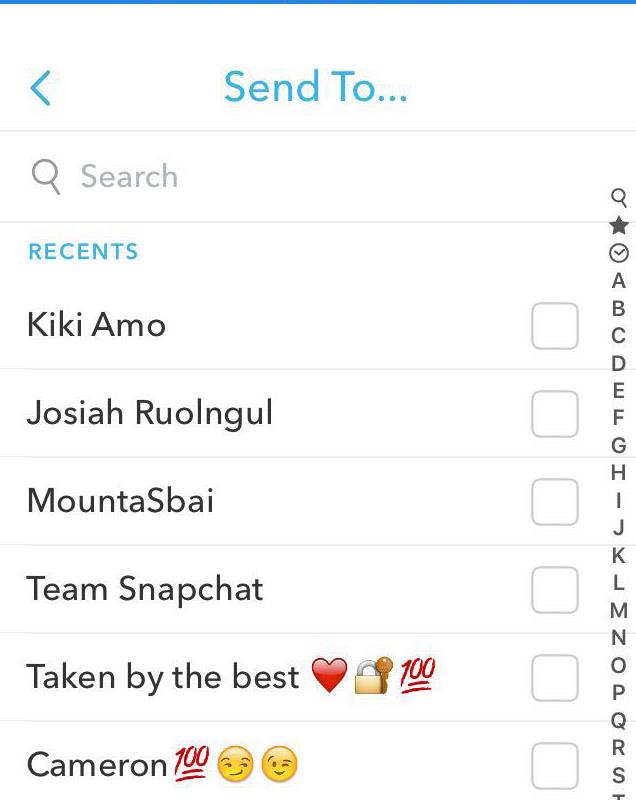 They will be able to see the photo that you send in their Chat inbox.

In this 2nd method, you can simply go to Snapchat. Select the person you want to send the picture to. Then swipe right across the screen.

You will see an option to upload a photo or record an audio or video. Tap on the upload icon. This will take you to your camera roll or gallery. Select the photo that you want to send and hit the send button. 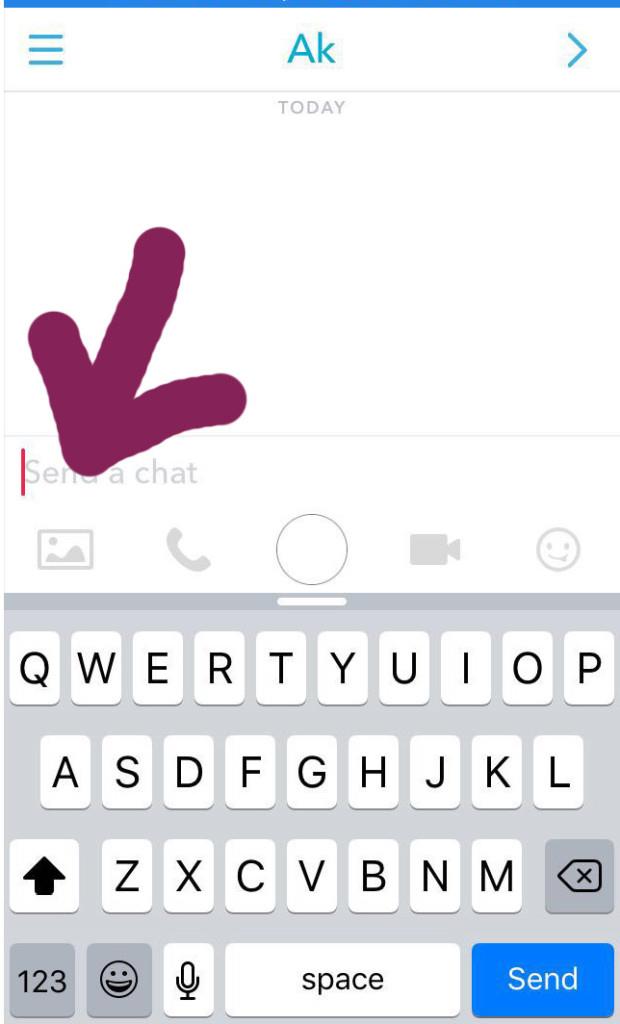 However, this will go as a Chat and not as a snap, meaning that it will have no influence on your score and snapstreak.

For Android: Uploading From Gallery to Snapchat STORY

As far as the rules are concerned, snaps and stories are all original photos and videos that you take from your phone. Stories serve a purpose — it’s a story of what you’re doing right now within 24 hours. And it makes no sense to upload pre-recorded snaps to your story. But I’m sure you’ve got your reason.

In android phones, it is possible to use images and videos from your gallery and send it as a snap or story using third-party apps.

There are several apps that claim to be able to do this. But in our experience, only one of them currently works. You might have come across articles and blog posts that say that apps like Swift Pic and Photo Saver can be used to upload pics to Snapchat stories. But this is not the case.

The only app that works as of now, correct us if we’re wrong, is the Casper app. Casper app is not available in the Play Store. But you can download the apk file from the link below:

Casper app is an alternative Snapchat client that you can use to upload photos and videos from your phone to Snapchat.

Once you have downloaded the Casper apk file. Install it.

Your Android Settings may not allow you to install the file at first, so you need to give permission to install app from unknown sources. Go to Settings > Security > Device Administration > Unknown Sources. The path to the setting may be different in your device.

Once you have installed the Casper app, open Snapchat and log out of your Snapchat account. If you don’t know how to log out Snapchat, go to your camera/home screen. Tap on the ghost icon at the top. This will take you to your profile screen. Tap on the gear icon at the top right corner to see your settings. Scroll down to the very bottom to see the log out button. Tap on it to log out.

Now open Casper. Login with your Snapchat credentials (username and password). You will see that the interface is almost similar to Snapchat, except it does not have a camera screen. 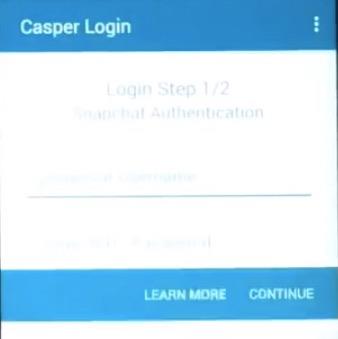 Upload a photo or video from your gallery. Make necessary edits, as in Snapchat. You can add texts, stickers, etc. 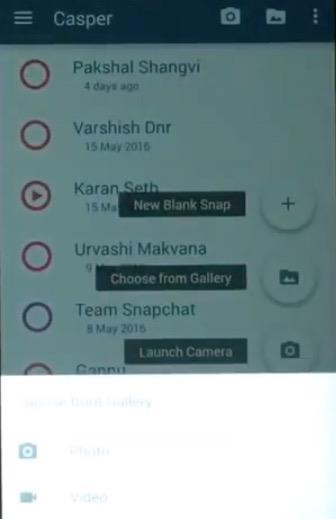 Step 6: Send as snap or story

Then send this snap to your friends or your story.

Log out of Casper and close the app. You can now log back in on Snapchat and see that the snap is indeed in your story.

You should be aware that you’re using Casper at your own risk. Using it once or twice may not cause an alarm to set off. But if you’re using it regularly, there’s high chance that Snapchat will lock you out of your account until you delete the casper app. This is because Snapchat does not allow using third-party apps to access your account.

However if you’re careful enough and do not use the app frequently, it’s possible to stay under the radar continually. I’ve seen several people do this.

For iOS Devices: Upload Snaps From Gallery to Snapchat STORY

For iOS devices, we have found no way of uploading from your camera roll to your Snapchat STORY without jailbreaking your phone.

All the third-party iOS apps that have claimed to be able to upload photos from your Cameral roll to your Snapchat Story no longer works; I wonder if they ever worked.

The only possible solution in case of iPhones is by jailbreaking your phone and using a third party app called Phantom.

We will not go into details on how to jailbreak your iPhone in this post. This subject has been covered extensively in other articles. Just refer Google for this.

This tutorial will be limited to jailbroken phones.

If you have successfully jailbroken your iPhone, you’ll be familiar with Cydia. It is the platform for installing third-party apps.

Phantom is a third-party plugin for Snapchat that, upon installing, becomes integrated to Snapchat. It allows you to do a lot of things on Snapchat beside letting you upload from your Camera roll. Some of these are:

– Save snaps and stories to your phone. – Increase the time limit for your snaps. – Delete discovery. – Custom filters and many more.

For the integrity of this post, we’ll stick to uploading photos and videos from your camera roll. The Phantom plugin can do this with a breeze.

When you install the Phantom app, it becomes a part of Snapchat.

Open the app and you’ll see an icon next to your Camera button that allows you to upload videos and photos to your Snapchat. You can send these as snaps or Stories. You can even save snaps sent to you. 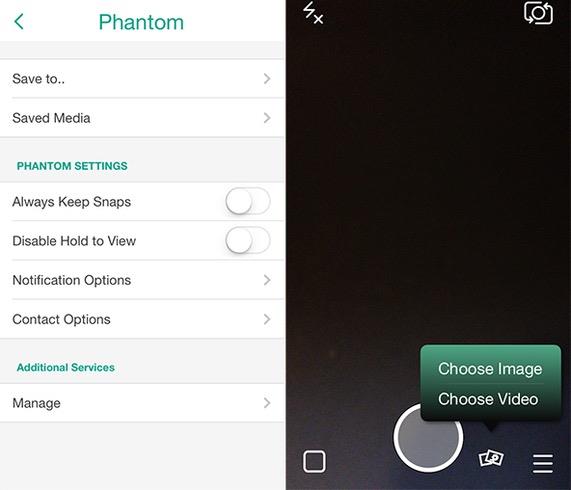 There are many things you can do with a jailbroken iPhone and this is just one of those. But you should know that jailbreaking your iPhone negates your warranty. Do the necessary research before you dive into it.

Other Ways To Upload From Gallery To Snapchat STORY

As have been discussed above, the correct way to send photos from your Gallery to your friends via Snapchat is by way of Chat. This is allowed by Snapchat. And it has given us the provision to do so.

Other than that, all other methods are flirting with ‘illegal’. Because Snapchat is very serious about the use of third-party apps to access your account, using Casper for Android and Phantom for jailbroken iOS devices could cause your account to get locked. If Snapchat locks you out of your account, you will likely stay that way for 12 hours or more. You will also need to uninstall all the third-party apps that you use.

So even if you do succeed at using these apps to upload Snapchats from your Gallery, you can in no way abuse the system.

That said, an alternative to uploading pictures and videos from your gallery to Snapchat Stories — and mind you, this is widely used and is in no way illegal — is by taking a picture of your picture, or a video of your video from your Snapchat camera.

That is, you open the picture or video on another device and take a picture or video of the device’s screen from your Snapchat. This will cause the quality of the snap to decline, but it’s your best bet if you want to stay under the radar.

Snapchat has about 150 million monthly active users, surpassing Twitter, according to latest reports. You can be certain that there has to exist a complex algorithm that scans your activities. So if you do use third-party apps, upload a maximum of 1 picture from your gallery using such apps and at least 5 photos from your Snapchat app per day. Although this is not proven, but it’s quite likely you are not caught.

Of course, if you’re using a jailbroken iPhone and the Phantom app, you can use the app as it is without having to worry about being flagged by Snapchat, because your phone has been jailbroken.

We have actually tried and installed most of the apps mentioned in the various tutorials. Here’s what we’ve discovered:

1. Swift Pic is a photo editing app and doesn’t work for the said purpose. I’ve tried this.

2. Photo Saver is a tool to save photos from another device to your phone. It cannot be used to upload photos to Snapchat Stories.

3. Casper app works for Android phones. However, casper is a third-party app and using a third-party app to access Snapchat could result in getting locked out of Snapchat. But if you use it economically, you could probably stay under the radar. Casper is not available in the Android Play Store (for obvious reasons).

4. As far as iOS devices are concerned, you need to jailbreak your phone to be able to upload a picture from your Camera Roll to your Snapchat Story. To do this, install the Phantom app through Cydia on your jailbroken phone. The Phantom app integrates with your Snapchat app, allowing you to upload videos and photos from your Camera Roll to Snapchat.

5. The last resort: open your photo or video on another device and take a picture or video of it from your Snapchat’s camera screen.

We’ll keep updating this post on any new developments on how you can upload photos from your Gallery to your Snapchat Story.