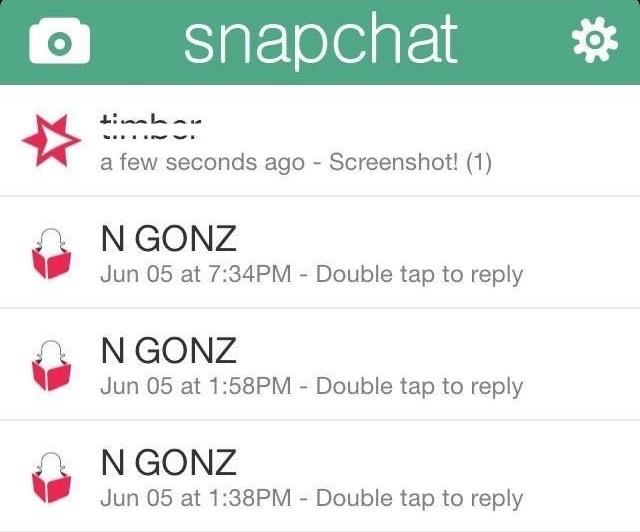 Snapchat is unlike most social networking apps in the market. You are only given a few seconds to view a photo, video or story after which it is no longer available. This self-deleting (ephemeral) feature of Snapchat is what makes it so popular, and sometimes infamous. But what if there was a way to save Snapchat snaps to your phone before it completely disappears?

Well, there is. We’ll take a look at some of the ways you can save snaps (photos, videos and stories) to your phone so you can view them again at a later time.

Read also: How to link Sarahah to Snapchat

These are discussed as follows.

The first and easiest way to save Snapchat photos is by taking a screenshot of the snap (photo). Snapchat allows taking screenshots. However it should be noted here that whenever you take a screenshot, the sender will be alerted. There’s a screenshot icon that tells the sender his/her snap has been screenshotted. All of these Snapchat Symbols and their meanings have been covered in an earlier post, so we’ll not go into details here.

However, if a snap is set to expire within mere seconds, it’s very difficult to find the time to take a screenshot. You’d need really fast fingers to do so. Also, this method doesn’t allow you to capture videos, only photos.

This method is a little complicated than merely taking screenshots. It involves setting your phone in flight/airplane mode.

If done right, the sender will not be notified that you have taken a screenshot of his/her photos.

I’m on an iPhone, so I’ll mention the steps involved in iPhones. But the process is pretty much the same for Android phones.

First, make sure it’s a snap you want to take a screenshot of. There’s no way to preview a snap in Snapchat. You just have to take the chance. Snaps from a particular sender that often sends you screenshot-worthy snaps are a good target for this.

When you have a hunch that the snap you’re about to open is worth saving, proceed.

Without closing Snapchat, swipe up from the bottom of your screen (in iPhones) to open your phone’s control centre. You will see a little aeroplane icon at the top left. Tap on it to activate airplane/flight mode. 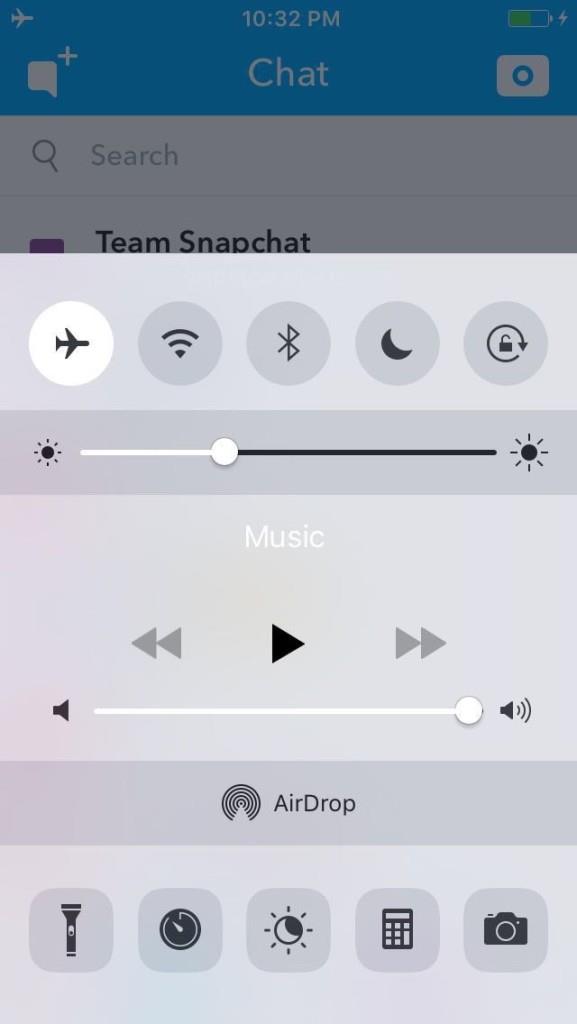 In Android phones, this is usually accomplished by swiping down from the top of your screen. You will see a similar icon (as that in iPhones) to activate flight mode.

Once you’re in airplane/flight mode, your phone is not connected to any network. All networking and communication features of your phone is shut down.

Now on the Snapchat inbox screen, open the Snap that you want to save. Take a screenshot of the snap before the timer expires.

Once you have taken a screenshot, log out of Snapchat.

To log out of Snapchat, go to your camera (home) screen on Snapchat. Tap on the ghost icon at the top of the screen, this will bring up your profile screen. Tap on the gear icon to go to your Snapchat settings. Scroll down till you see a Log Out link. Tap on it to log out. Since you’re still in flight mode, you may not be able to log out. But tap on the ‘Log Out’ link anyway. 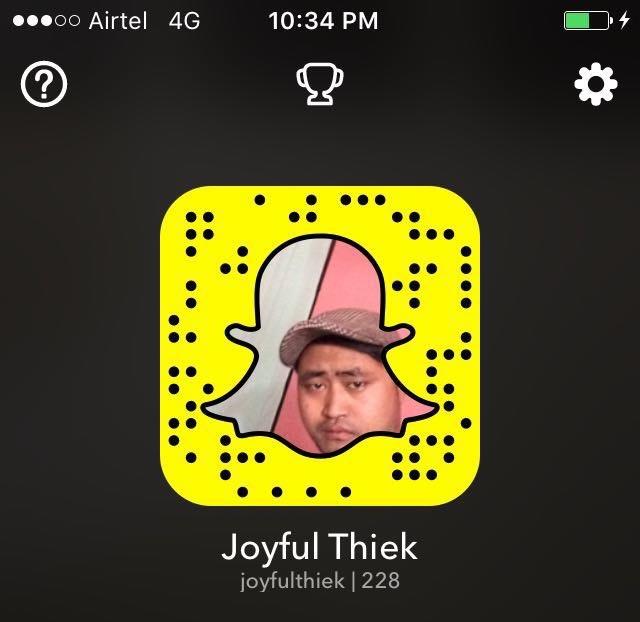 Now turn off the Flight mode on your phone. When your internet connection is back on (you might need to switch on your Wifi if you’re on a Wifi network), open Snapchat and log back in. You will see that the snap you just took a screenshot of is still unopened. And the sender is none the wiser.

The sender doesn’t know that his/her snap has been screenshotted, and the snap on your end is still unopened.

Some users have reported that this method doesn’t work in iPhone 6S (verification needed).

3. Save Snapchat Snaps (Photos, Videos & Stories) by Connecting To Your Computer

For this method to work, the snaps that you want to save should not be opened yet. Because once you open them, they are deleted from your phone.

For iPhone and Mac users:

Saving both Snapchat photos and videos can easily be done if you’re on an iPhone and a Mac (Macbook or iMacs). However, make sure that the snap hasn’t been opened yet. We will be recording your iPhone as a movie in your computer and saving that movie file to your computer.

To do this, connect your iPhone to your Mac using a USB cable. I’ll assume your iPhone and Mac are already synced. 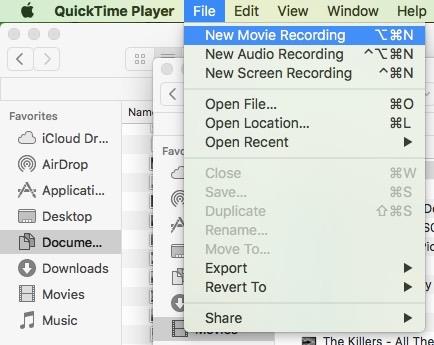 To change the source of your recording device, tap on the little downward arrow icon next to the record button on the QuickTime screen. You will see your iPhone in the Camera and Microphone sections. Select your iPhone for both the cases. 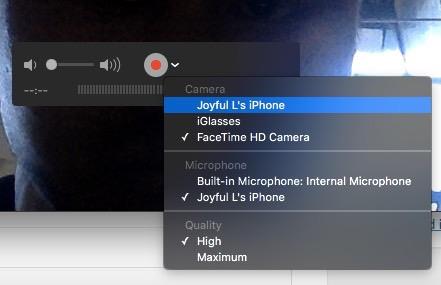 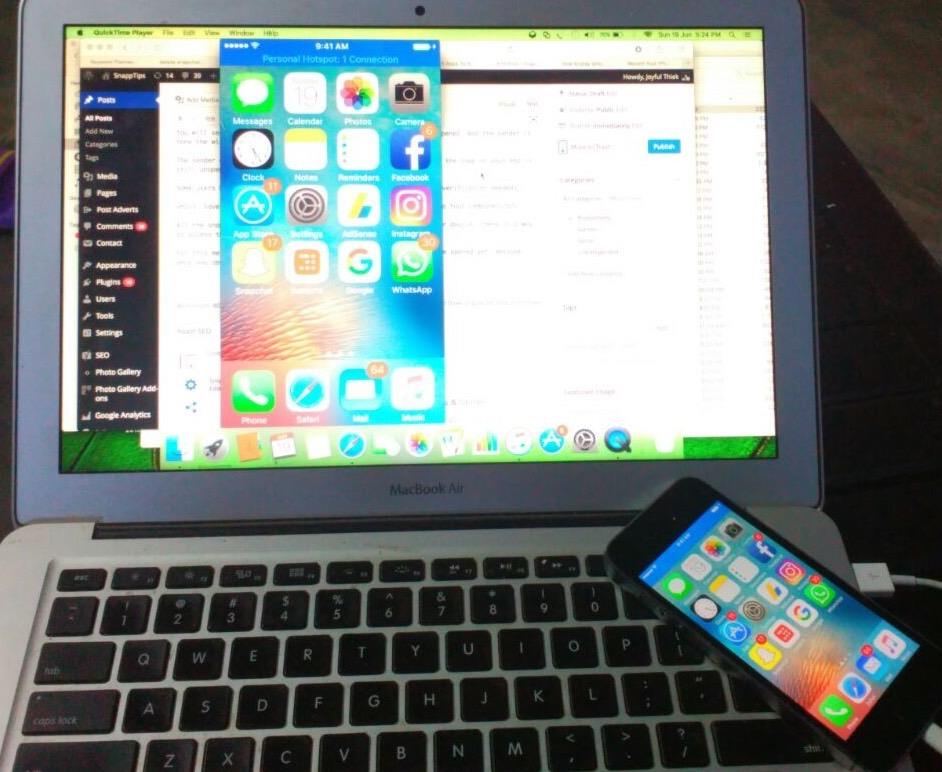 Open Snapchat on your iPhone. Go to your inbox.

On your computer, click on the Record button. This will start recording everything that you do on your iPhone. 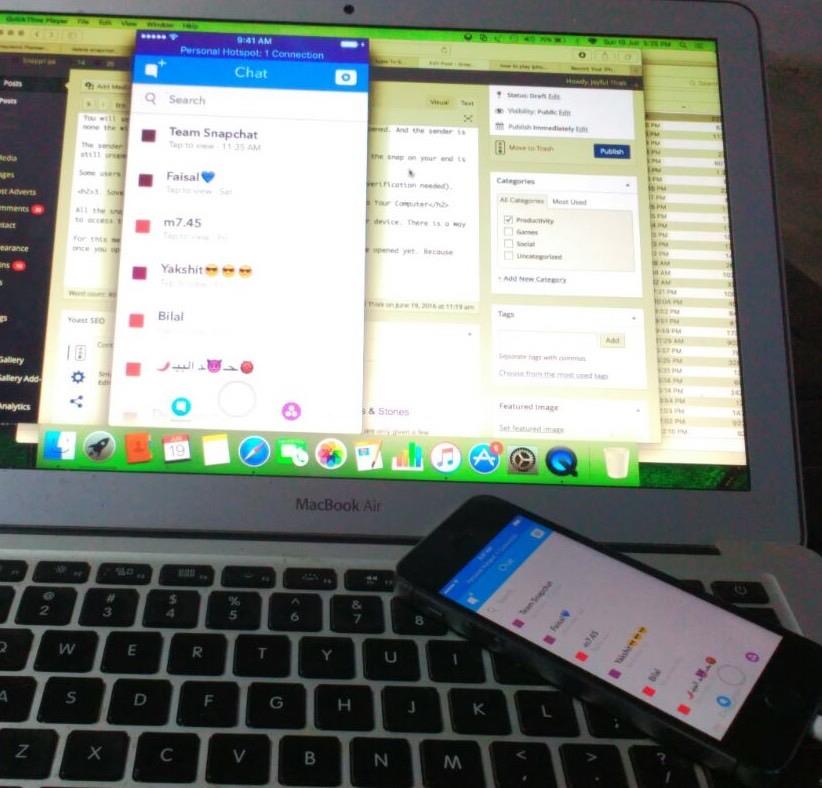 On your phone, start opening your Snaps. All the snaps that you open are recorded in QuickTime on your Mac.

When you have finished recording the snaps that you want to save, click on the record button again to stop recording. Go to File > Save to save the recorded snaps and name it as you please.

The file wil be saved as a .mov file which can be played in any movie player.

There you have it. You can save all your snaps (photos and videos), including stories to your computer without having to install anything. Better still, the sender of these snaps will not have the faintest idea that you had saved these snaps.

Using any normal video editing application, you can cut the video into smaller pieces — for each snap, or pause the video and take screenshots for photo snaps. What you do with it is up to you.

For Android Phones and PC (Windows):

For Android phones and PC, the process is a little complicated. You’d need to enable developer access and USB debugging in your phone.

You can follow the entire process at this link: Record video of your android screen.

Using this method, you will be able to record the screen of your Android phone. Open Snapchat and record the video as you view snaps sent to you.

There are several other suggestions including using apps like iFunbox to access temporary files stored in your phone. Unopened snaps on your phone are stored as temporary files. It is suggested that you can access these temporary snap files using iFunbox and other similar apps. But I’ve so far haven’t had any luck using iFunbox to access Snapchat app from my computer. If it was possible in the past, Snapchat clearly disabled access to its data in the new updates.

The best and most realistic approach to saving Snapchat snaps as far as I’ve observed is using your computer to record your phone’s screen as stated earlier.

There were several apps that have worked in the past to save snapchat photos. But with the new updates, it looks like none of these apps are now capable of saving Snapchats.

However there are several apps that aren’t built specifically for Snapchat, but which can be used to save snaps to your phone. We’ll take a look at some of these:

AZ Screen Recorder allows you to record your Android screen as you open apps and do stuff. It is especially built for capturing videos of game-plays and such. However, reports suggest that the app works for recording Snapchat screen as well. 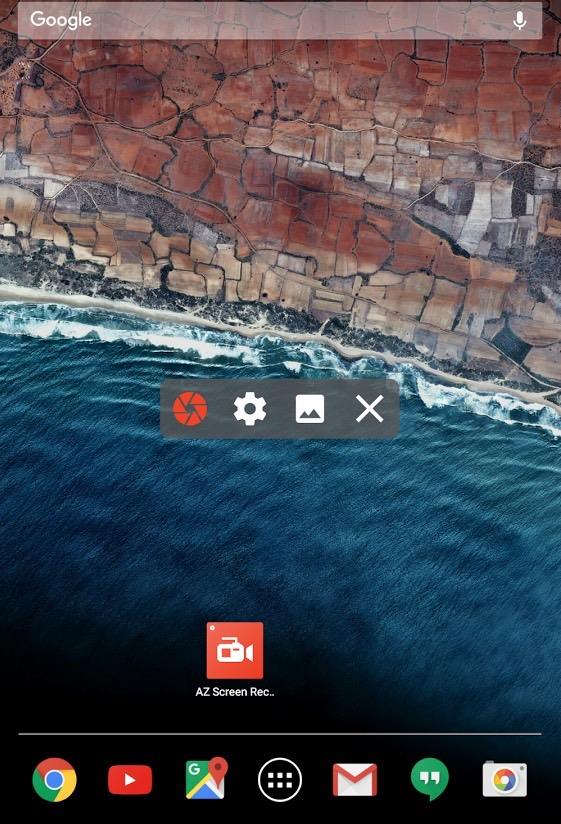 All you have to do is run AZ Screen Recorder and start recording. Then go to Snapchat and open your snaps. All of this will be captured as a video by the Recorder. Once you have captured the snaps you want to save, stop the recording.

There is currently no app on the Apple App Store that’s able to record your iPhone screen without first jailbreaking your phone.

If your iPhone is jailbroken, you can use Cydia to use third-party apps to record your screen. Since the topic of jailbreaking is an altogether different issue, we’ll save it for another time.

Why You’d Want To Save Snapchat Snaps

Saving Snapchats to your phone’s camera roll or your computer is a much needed knowledge, especially if you’re a journalist or one working in social marketing.

Let’s say, Kylie Jenner made a huge announcement on Snapchat that she and Harry Styles are engaged. As a journalist or reporter, you are likely to follow her on Snapchat. You saw the snap, but you aren’t able to capture it. Upon viewing the snap, it is likely that you’re writing about it for your news site. But you do not have the video to show for it. The much needed proof. And the much-needed factor for your article to go viral. Had you captured the snap as a video, you can simply post the video on your site, without having to write much. No one’s going to question the authenticity of your report.

That was a terrible illustration, but you get the idea.

This works in the case of friends as well. We all need embarrassing photos and videos of our friends. Because that’s what friends are for. And there’s no bigger platform than Snapchat to find embarrassing and, sometimes, nude photos of your friends.

What you do with the snaps that you save is up to you. But won’t you want to have that kind of power at your disposal?