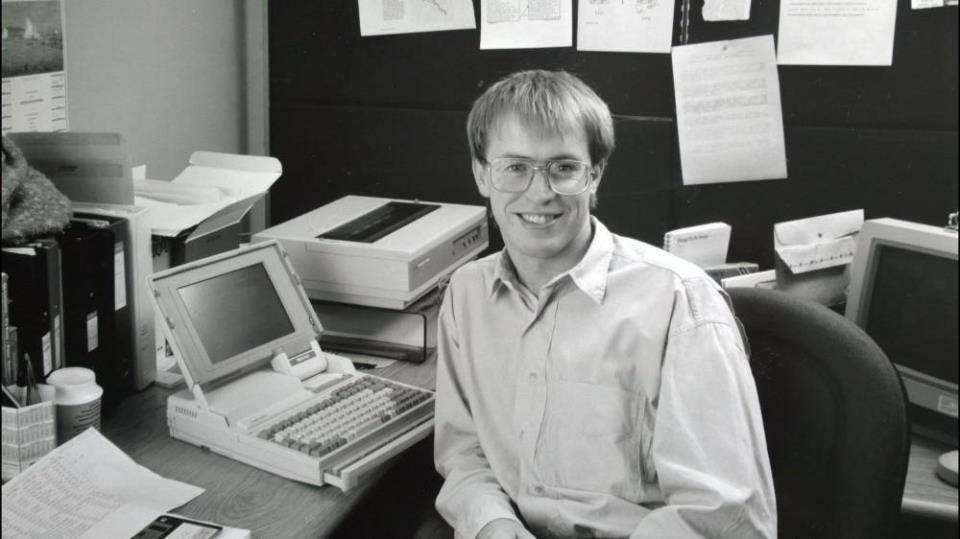 Yours truly with Bill Gates-esque glasses and the current state of the art in laptops, 30 years ago, late 1980s. One man and his PC. And no ‘mobile phones’ in sight!

We live, as many have observed, in a post-PC era.

30 years ago, a mains-powered PC or Mac, usually, in the office, was an offline thing, where you ran up spreadsheets and custom programs, where you copied files onto floppy disks and ran dedicated word processors. Your phone had a curly wire attached and was strictly a landline.

20 years ago, a person’s ‘computing’ window on the world, the centre of their digital life, was a mains-powered PC or Mac, at home or in the office, doing all the serious stuff, plus fledgling online look-ups and basic email. Their phone handled calls, texts and that was it.

10 years ago, their window (no pun intended) on the world was still a PC or Mac, though increasingly a laptop of some kind, so at least it was mobile to some degree. And phones were smarter, with email, integrated cameras, media players, and so on. But the PC or Mac was still the way in which people interacted with the wider world, looking things up, creating non-trivial documents, putting together photo albums, playing games, and so on. The (circa) 3″-screened smartphones of the time just weren’t up to the task.

in 2017, most people’s primary ‘computer’ is their smartphone. It’s with them 24 hours a day, it’s the (typically 5″ ish) screen on which they get most things done, interacting with a dozen social services, manipulating photos and videos, playing top tier games, enjoying media. This is typified by the iPhone and Android OS-powered phones, with ‘apps’ available for almost any task, any service, and with desktop class web browsers. For such a modern day smartphone user, a PC or Mac is strictly optional and, for many, just something to fall back on if they need to do loads of typing or print off some Office documents or play a particular game which needs the big screen.

I’ve had several friends come to me for help recently, asking how to to things on their smartphones and, at the point where I asked “Just drag and drop so-and-so over to your PC” they looked blank. They didn’t own a PC. Or a Mac. Their only ‘computer’ was their smartphone, and this situation is becoming more and more prevalent. My own daughter lives on her iPhone 6s Plus and her Windows 10 laptop is only really used for watching YouTube and iPlayer on a bigger screen and for doing homework in Microsoft Word. And the former could be on her phone screen if she wanted. Leaving rather a narrow unique selling point for the desktop/laptop these days. As I say, we’re post-PC.

So where does Windows 10 Mobile fit into this world? Uneasily, for most people, in that the best and latest games aren’t available for it. Snapchat ditto. Facebook is a resource-hungry monster on Windows 10 Mobile (actually it’s not lean on other platforms too, but that’s another rant for another site). Applications like Instagram are pale shadows of their selves on iOS and Android. And far, far, fewer banks, shops and other establishments have ‘apps’ for Windows 10 Mobile than on the other mobile platforms – it’s considered by them that there wouldn’t be enough of a user base to warrant the development effort on Windows 10, given that most people are quite happy accessing banks and shopping sites in their desktop browser, so who needs a dedicated app?

Something of a gloomy picture for Windows 10 Mobile then, hamstrung by Microsoft stopping making the Lumia range of hardware in 2016 and thus there’s precious little new silicon arriving in the ecosystem (coincidentally, the Alcatel IDOL 4 Pro is expected here later today and I’ll start some serious review coverage).

But Windows 10 Mobile isn’t dead. Microsoft still ‘has’ it as an ARM-based counterpart to the full Windows 10 on ARM that’s coming to various form factors over the next year. Microsoft is continuing to update the UAP (Universal Apps Platform) that’s common for phone and ‘desktop’ (a term that today encompasses ultrabooks, hybrids and even tablets), it’s continuing to update the parts of OneCore which are relevant for mobile, all as part of the new ‘feature2’ branch of Windows 10 for mobile going forwards, it’s continuing to update its first party UWP applications that work across phone, tablet, laptop, Xbox, and so on. On the first party software side then, there’s still momentum. And the third party application scene is far from dead, as my continuing updates to our app, media app, and games directories hopefully attest – to say that ‘there are no apps’ for Windows Phone or Windows 10 Mobile is clearly plain wrong. 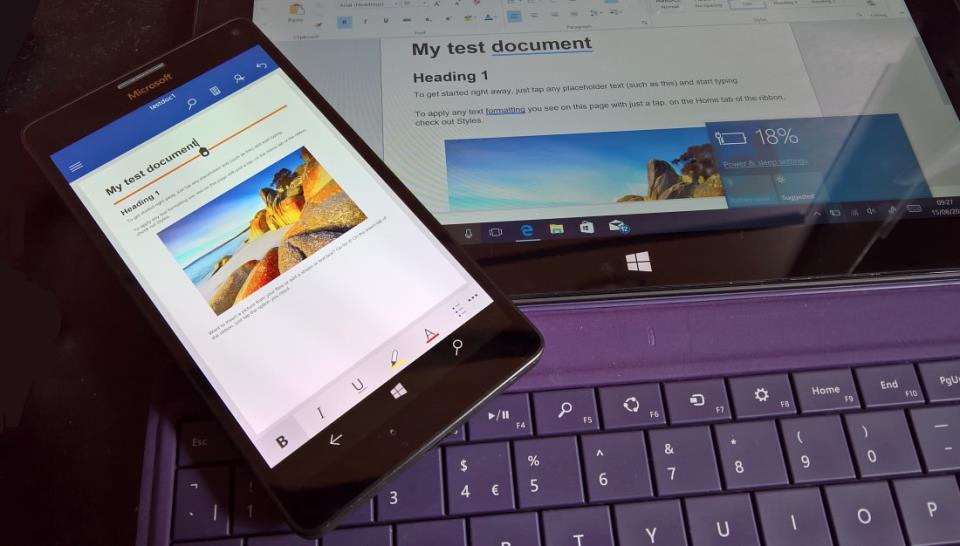 How is all this relevant to the man in the street? It probably isn’t, post-PC.

But there’s a significant section of the overall IT market, professionals if you like, for whom Windows PCs (laptops, desktops, hybrids) still play a significant part in their lives. Heck, I’m one such and you probably are too. At which point, to have:

…is all very attractive. As a tech geek, it’s even elegant and ‘the way things should be done’ – compare what Microsoft is doing with the mess Apple is making trying to massage iOS into a desktop class OS on the iPad Pro, compare it with the mess Google is making of trying to combine Chrome OS and Android. While each of the latter have thriving mobile OS ecosystems, and while each tries to paper over the cracks with continuity features and synchronisation, they’re still rank hacks compared to the elegance of one OS that runs on all form factors.

Is being ‘elegant’ enough? It might well be, at least to make sure that Windows 10 Mobile survives until it’s either in lock step with, or merged into whatever Windows 10 becomes in 2018, 2019 and beyond.