There’s been a lot of movement in terms of valuation for the major social networks over the past few months. Snapchat has seen its stock price fall back to its IPO value, while Facebook has risen to all-time highs. In the meantime, companies like Pinterest are still waiting to step from the private into the public realm, and LinkedIn and Tumblr have settled into their new digs at Microsoft and Yahoo, respectively.

With all of these changes taking place, we figured it would be a good time to go over where a few of the major social networks currently sit in regards to their valuation. Each of the companies listed in the chart below is valued based on their most recent sale price, valuation, or market cap. 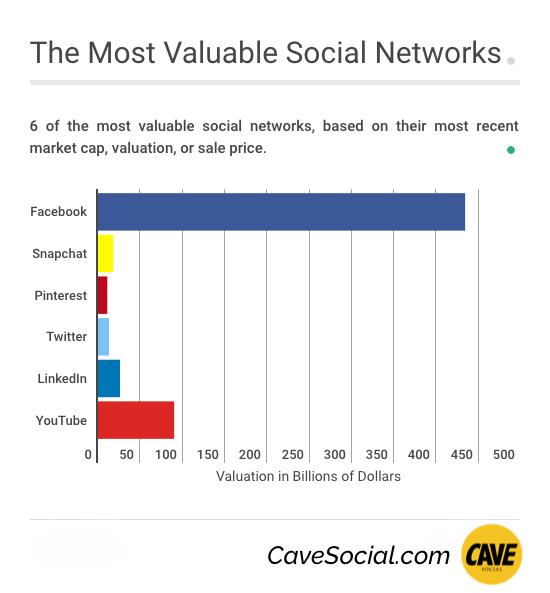 Facebook has had an amazing run. Since their IPO, they’ve consistently shown increases in both ad revenue and user growth, two important metrics for investors. They’re also the king of time spent on platform, with users spending over 50 minutes per day on the network.

One of the main reasons Facebook has been able to stay on top of the pack is their constant updates – they’ve transitioned to becoming a mobile-first platform, and a video first platform. Both of these shifts have made the company extremely valuable.

After a huge kickoff on Wall Street, Snapchat recently came back to earth. Their first quarter earnings were poor, to say the least.

That being said, numerous other social networks have had poor first quarter earning reports after their IPO.

The company’s losing a lot of money, $2.2 billion last quarter alone, to be exact. On top of that, they’re putting less focus on user growth, and more on engagement. It’s a different strategy, and while it might not be the wrong one, it isn’t yet instilling confidence in investors.

My bold social media prediction for 2017 was that Pinterest would go public. It’s not looking like that will happen before the end of the year, so I may have to eat my words.

That being said, Pinterest has hired a CFO, a position the company has never had before. That would signal that they may be trying to get their books in order and look to go public sometime in the near future.

Twitter has had its own challenges with user growth, which has slowed over the past few years. They’re making a serious investment in live video content, partnering with big names like Bloomberg and the NBA. Only time will tell if the strategy pays off.

Many speculated as to whether or not Microsoft was overpaying for LinkedIn when they purchased the social network for $26 billion. While that remains to be determined, one thing is for sure – LinkedIn has done a great job of expanding their advertising platform as of late. It should definitely move the bottom line, and make that sticker price seem more reasonable.

This is easily the toughest valuation to determine on our list.

When the company was purchased by Google for $1.65 billion over a decade ago, some thought (as with Microsoft’s purchase of LinkedIn) that Google overpaid. They couldn’t have been more wrong.

Today, YouTube has revenues of over $12 billion per year, and with the rise of video online, don’t expect that number to shrink anytime soon.

It’s interesting to note the fluctuating valuations of the major social platforms, and how they grow and develop over time. As you can see, social media is now a huge industry, and as such, the focus on such growth is not likely to die down any time soon.