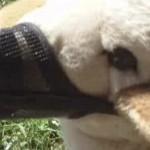 In my last post, I mentioned that some people think muzzles make dogs more aggressive. I said that I have found that alternatives (like tight leashes) usually make a dog more aggressive. Consider the true story below. Names have been changed to protect the innocent

Betty the technician said, “No, let’s not use a muzzle. It might traumatize Tiffy.” Betty preferred restraining little Tiffy with a slip leash.

Before administering the shot, Betty needed to weigh little Tiffy. As Betty led Tiffy over to the scale, the scared dog starting snapping at Betty’s arm. Handler, Sheila said, “let me put a muzzle on Tiffy. I don’t want you to get bitten.”

Betty replied: “No, I don’t want to traumatize her” as she held the slip leash tighter and pulled little Tiffy away from her body. As she did this, Tiffy, got more frightened and tried harder to bite Betty. This went on for a few more seconds. The more Tiffy snapped, the tighter the slip leash. Now little Tiffy was practically hanging in the air in her slip leash. Even though she was choking, Little Tiffy was finally able to bite Betty the technician on the arm.

It wasn’t a bad bite. But it was enough to for her to hand little Tiffy back over the Sheila the Handler so that she could put a muzzle on her. At this point, Tiffy was hyperventilating, her pupils were dilated and she was quite traumatized. Sheila was really scared to put her hands around Tiffy’s mouth at this point, but the poor little dog needed her shot. So Sheila calmed herself, took a deep breath (trying hard to not telegraph her own fear to the scared dog) and put a cloth muzzle on little Tiffy.

Tiffy seemed to let out a size of relief and some of the tension in her body released. As Tiffy relaxed, Sheila pulled little Tiffy into her lap and held her gently while she got her shot. Even though the shot went directly into Tiffy’s hip muscle (normally a painful procedure), little Tiffy did not yelp, nor struggle. As soon as the shot was administered, Sheila removed the muzzle and continued to cuddle Tiffy in her lap for a while, then handler and dog left. Both relieved that their little ordeal was over.

Caution: Always seek the advice of a professional behaviorist or dog handler before using muzzles.