Today when I opened up my laptop and switched to Skype, I found that I had been logged out: 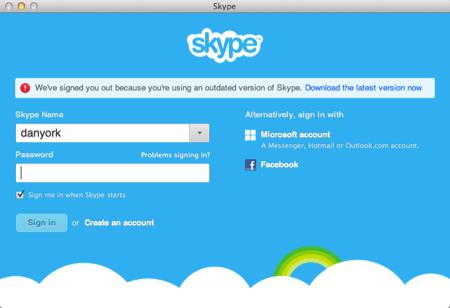 The text in that image says:

Now, to be clear, I wasn’t using an ancient version of Skype. My laptop had version 6.3.0.602 from sometime in, say, March 2013 – so yes, it was over a year old, but the thing with Skype is that it has had a history of always “just working”, which perhaps we as users have gotten used to. The upgrade went fine on my MacBook Pro that is still running Mountain Lion (10.8) and I’m now using Skype version “6.15 (334)”.

In a Skype public chat in which I participate a number of other users said they’d been logged out – and looking in the Windows Skype community and Mac Skype community web forums I see MANY messages from people who are experiencing problems over the past week. The frustration is even visible in the Linux Skype community (a community Skype has often ignored), where a staff moderator posted last Friday, August 1, this message:

The replies mostly indicate that the “new” version of Skype won’t work on various configurations of Linux. The 99th response to the threadperhaps sums up the anger best:

You can see similar sentiment in the lengthy thread in the Mac community. Here’s the 78th message in the thread:

Bye bye skype. I’ll use it on my iPhone, but no more on my desktop, and if it gets weird on my iPhone skype will simply lose a customer. Period.

There are MANY more examples… and many more in the Windows community as well. All in all it seems that this “forced upgrade” is not going down well with many people.

As far as I can see, Skype is pointing people to this support article about upgrading that says:

Skype also provided a bit of a preview of this action in a July 16, 2014, blog post titled “Update Skype now to improve your experience” where they trumpted all the benefits of upgrading and included one little line about the impending retirement:

where it turns out that “in the near future” meant about two weeks later at the end of July 2014. 🙁

The lingering question is… why now?

The down side of this for Microsoft/Skype is that they can’t get people to use all their new services – or see their new ads – if there are so many older versions.

I get all that.

But why now? Why the end-of-July 2014 point? Was that just an arbitrary date? Is there something else driving it?

What are they doing that caused them to decide NOW was the time to move?

And maybe THAT is the driver. Perhaps Microsoft realizes that to compete with all these new services and to be able to evolve Skype they NEED to force users to come up to the latest versions. Perhaps they are hoping that any disruption in users behavior will be only temporary and that after that migration they can then move ahead faster.

Or perhaps they just think of us all as sheep who won’t be bothered to change.

Will Users Move To Alternatives?

The question is, of course, will users actually move to alternatives?

Skype is effectively dead to them.

But there is no easy way to know what percentage of people are affected by these upgrade issues. It could be quite small. It could be that the vast majority of users have automatically updated with no problem.

It’s also not clear where Microsoft/Skype is in rolling out this forced upgrade to their users. From the user community posts it seems many people started experiencing this problem back on July 30th or 31st. I just received the notification this morning, August 6th. I know from others online that they are still using older versions and have not yet received the forced upgrade notice.

Times are different in 2014, though. There are more and better choices than there were four years ago. Offerings from Apple, Google and Facebook all are quite compelling – and bring with them a directory of users. Perhaps not as many as on Skype, but still quite solid.

Switch to using more of another service such as iMessage, Google+ Hangouts or Facebook? Try out a startup such as Tox?[1] Use one of the many mobile apps?