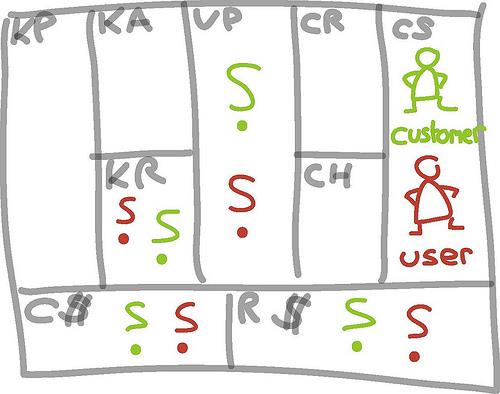 Last week I met with Steve Blank and Ann Miura-Ko at the University Coffee in Palo Alto to chat about Business Model Generation and our upcoming Business Model app for the iPad. It was a real treat. One of the questions Steve and Ann brought up was how to differentiate between users and customers in the Business Model Canvas.

Until this chat the question hasn’t really preoccupied me, because it has been less of an issue for most of the companies I work with (mainly large multinationals). However, I do see the relevance of the question (particularly in a start-up context in the software and Web space, but also in other spaces). And how couldn’t I have an open ear for a point made by one of my entrepreneurial role models and a rising VC star… Steve and Ann suggest separating customers and users into two separate building blocks when describing a business model. I prefer keeping one single building block that captures users and customers. At the end of the day I think we all have to use the representation that we are most comfortable with. However, I do fully agree with Ann and Steve that it is interesting to look into the user vs. customer question (and a matter of survival if you are a start-up with users, but no customers…).

After the chat I couldn’t let go of the question, so I sketched out some business model examples on my iPad on a flight from beautiful Vancouver back to San Francisco, our family’s temporary HQ. This helped me get a clearer picture of the question. The models I sketched out were Skype, Google, Youtube, Flickr, and Sony Playstation. Each business model has a different user vs. customer configuration.

I basically see all groups for which a company creates value through a product or a service as users. Customers are simply users who pay for the value that is created for them in the form of a revenue stream for the company. In some cases users and customers are pretty similar, except that one group generates revenues by paying for additional features of functionalities (e.g. Skype, Flickr). In other cases users and customers are distinct groups, where one subsidizes the other (e.g. Google, Youtube, Sony Playstation, government services). Let’s have a look at some different business models and their dynamics.

Skype is company that allows making calls over the Internet based on its proprietary software. It has over 500 million users. Of that only a tiny fraction are paying customers. However, in this case it is difficult to distinguish between users and customers, because they might be the very same people. For example, I use free software-based Skype-to-Skype calling all the time, but occasionally also buy so-called SkypeOut credits to make calls from my computer to international landline and mobile phone numbers. I am a (free) user and (paying) customer at the same time.

Regarding the “free user vs. paying customer question” Skype provides some even more interesting material. Skype’s free users are crucial to its success. One might think that the reason is to assure a decent revenue even with a small conversion rate from free to paying users. In fact, that is not the only reason.

Skype needs a large user base to assure good calling quality. Every call is routed through the Internet, from one user to another, based on so-called peer-to-peer technology. The more users Skype has, the better the calling quality. In fact, in that regard users are a key resource of its business model. And since Skype manages no network (because of the Internet-based peer-to-peer technology) it costs the company practically nothing to add on free users. 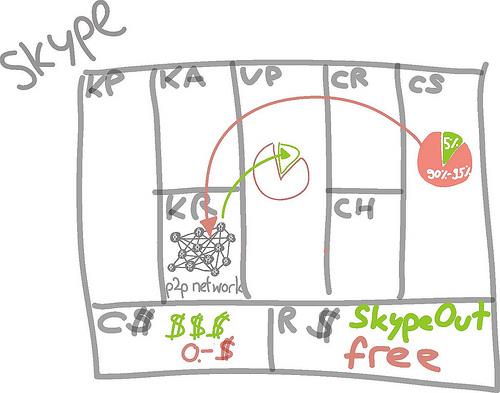 Flickr is a website that allows hosting images and videos. Like Skype it has a large number of free users and only a fraction of paying user/customers who pay for advanced features like increased storage space or unlimited uploads. Like Skype this is a so-called freemium business model with a set of free services and paid premium services.

However, different from Skype, people using Flickr usually fall either into the category of free users or paying customers. Another difference with Skype is that Flickr’s free users generate costs that the company has to recuperate with its paying user/customers. The free users do, however, add value by contributing to the content on the website. Flickr now has over 4 billion images on its site. 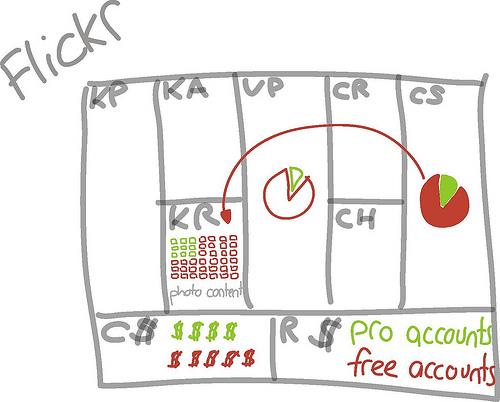 Google’s core business – search – is another story. In this case (free) users and (paying) users/customers are two totally distinct groups. The free users are the people using the search engine. The paying users/customers are the people buying keywords for search advertising. Both groups of users are offered two totally different services and value propositions. The first service (search) is free and subsidized by the latter (adverting). And the more (free) users Google can attract, the more interesting it is for advertisers. 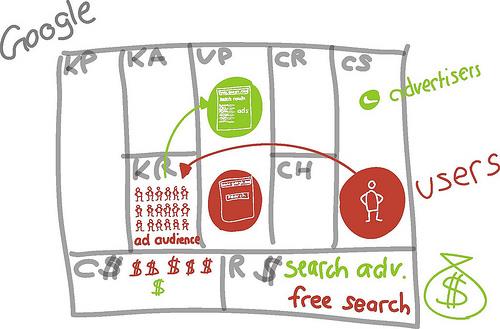 Youtube, the leading video-sharing website which was aquired by Google in 2006, provides another interesting element to the user vs customer discussion. Free users can be split into two subgroups: a smaller group of users who upload content (often their own user-generated content), and a larger group of users who simply view/consume content. The former provide an important resource to the business model – content – to attract the latter. 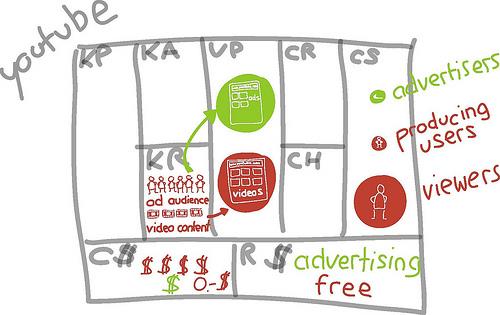 A fifth interesting case regarding the user vs. customer question is the business model of Sony’s game console, the Playstation. The users of the Playstation buy their console and in that sense they are customers. However, traditionally Playstation consoles are subsidized in order to make their price more affordable and attract as many users as possible to their game console platform.

Sony does this – and accepts losses on selling consoles – because their most lucrative user/customer segment lies elsewhere. It’s the game developers, who make the games for the Sony Playstation and who pay Sony a license fee for every single game sold. Hence, the more users/gamers Sony has, the more attractive it is to developers, the more games are made and sold, and the more license fees Sony pockets. In this sense, the user-base is a key resource to Sony and is its value proposition to game developers. 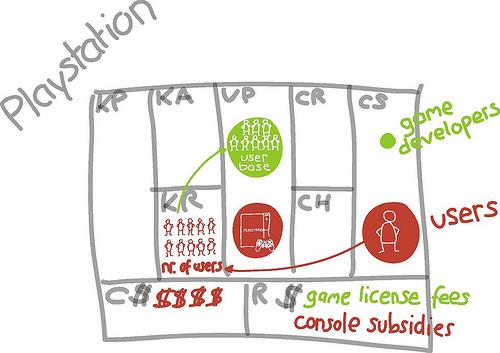 There are other interesting models that I haven’t visualized. In government services there is also difference between users and customers. We could see beneficiaries of services as users (e.g. regarding grants and contributions) and governments or tax payers as customers (since they foot the bill).

A final model I have briefly looked into from the user vs. customer angle is the insurance model. One could argue that in an insurance scheme a large number of customers are paying for a policy in order to be insured against a hypothetical incident. Yet, only a small group of these customers turn into users because they incur the incident and want to benefit from the insurance policy… In this sense a large number of paying customers (who are not “users”) are required to “subsidies” a small group of customers who become users based on an incident.