Update (05 Sep 15): I was contacted by the author of the source post for this article and informed that he is working on a personal app and it is unrelated to the Skype product team in anyway:

“Regarding this post, Skype Central is a placeholder name for a personal Windows 10 Universal App I am developing that acts as a document/tools/blog aggregator.  It has nothing to do with Skype for Business or the Skype Product Group.  The entry on TechNet was a test feed to be delivered to the app for feed testing and Live Tile testing.  The logo is also unofficial and does not represent any current or future Skype rebranding. Apologies for the confusion.”

I still think a combined app, just like they have done with OneDrive, makes a lot of sense in the long run.

It appears Microsoft has plans to change the name of its Skype for Business platform in the near future as they are preparing a Universal Windows Platform (UWP) app for the service.

This upcoming name change is also a strong indicator that the Redmond company intends to merge their business and consumer programs into one universal application.

A blog post on the Microsoft’s TechNet website by Tony Eversole, a Microsoft employee, was posted late Friday night indicating it was a placeholder for the SkypeCentral App.

The short one paragraph post states it will be used as a landing place for the team as they work on various aspects of the Windows 10 UWP app:

Placeholder entry for Skype Central Universal Windows 10 App.  The idea is to have a shared blog from which PFE/DSE engineers can update the main landing page of the app to include news, troubleshooting, CU release information, or anything related to Skype for Business.  This shared blog feed will be the mechanism from which Windows 10 Live Tiles are updated (notifications in Action Center, Live Tile data update, new article count, etc).  This shared blog/feed can be hosted on TechNet or a 3rd party blogging service which complies with RSS 2.0.

The post also has two logo images included with it which includes the name change and a possible overall logo change as well: 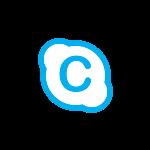 As mentioned earlier, this could also indicate that plans are on the horizon to consolidate Microsoft’s business and consumer Skype offerings into one UWP just like they have done with their OneDrive app.

As the company is reducing the number of apps they are maintaining, like the recent announcement of shutting down several Lumia Camera related apps, combining both sides of Skype into one app makes a lot of sense.