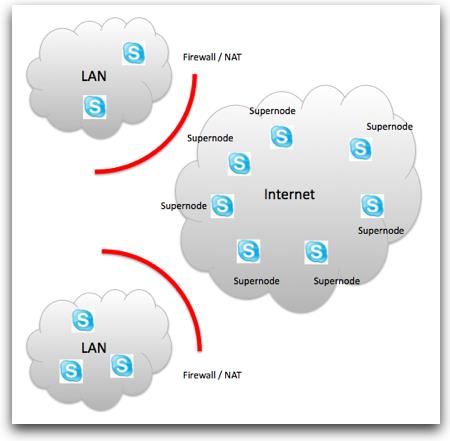 For the first time in 3 years, Skype was down today – and as I write this is still in the process of slowly coming back online. A ton of articles were written today, mostly all pointing back to Skype’s blog post or status update, which most importantly said this (I’ve shortened it a bit):

Let’s explain this a bit more.

If you go back and read my primer on the technology behind Skype and P2P networks, I described supernodes as Skype clients that are on the public Internet and NOT behind a firewall or NAT device that broker the communication between two Skype clients. In a very simplistic view, the picture looks like this:

As I note in the update section to that post, the Skype clients acting as “supernodes”: 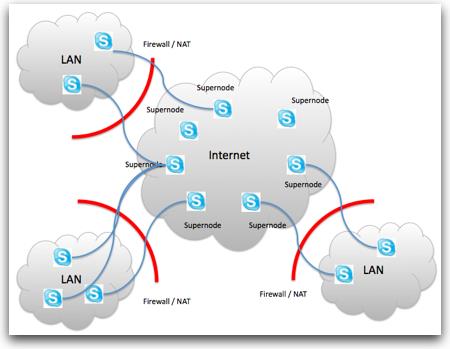 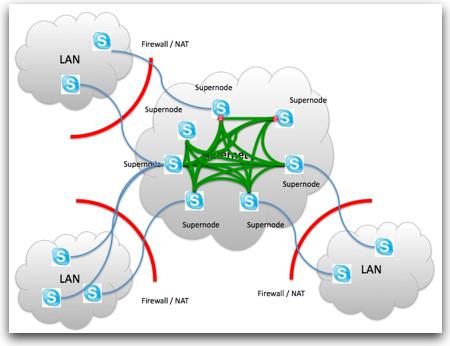 Now, Skype’s picture is not exactly like this. We know from the explanations of the 2007 outage that Skype uses a hybrid architecture that involves some “authentication servers” that Skype clients connect to in order to first be granted access to the Skype P2P cloud. I’m not aware of anyone publishing technical details on exactly how those authentication servers connect into the Skype infrastructure, but let’s just say it looks something like this:

Skype clients need to connect to these authentication servers in order to validate their username and password, and presumably to validate their calling plan, how much money they have left in their account for calls, etc. 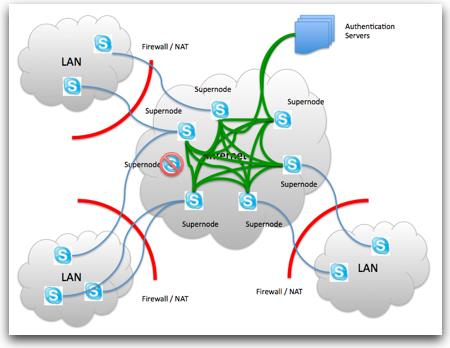 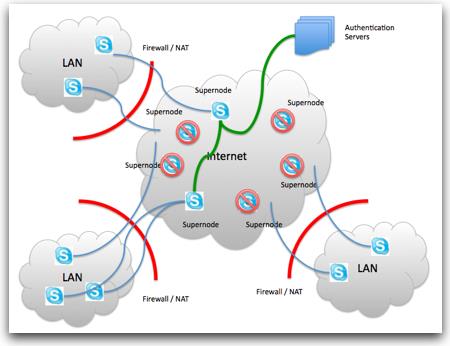 Something broke. We don’t know what. Skype’s blog post says only:

What was the “problem affecting some versions of Skype“? No clue. Was it a software update that somehow affected the supernode algorithm? Did it affect the communication with clients?

But according to Skype, that’s what happened. Hopefully they will be a bit more forthcoming soon (although perhaps NOT, given their pre-IPO status), but at the moment that’s all we have to go on.

No details yet on what these “mega-supernodes” are, but some speculation is that instead of relying on individual Skype client computers to “become” supernodes, Skype is going out and setting up computers/servers specifically as supernodes. Rather than rely on potentially unstable computers, Skype goes out and gets some rock solid servers under their own control and sets those up as supernodes.

We don’t know yet… but those are the kind of things Skype could be doing. Again, hopefully we’ll get more details soon… although we’ll have to see.

And hopefully we’ll get some better technical explanations, too!

NOTE #1: It should be noted that there are other types of “servers” connected to the Skype P2P cloud beyond the authentication servers. There are also the servers and gateways used for SkypeOut and SkypeIn, gateways to mobile operators, web presence servers, etc. I left them out for the simplicity of the drawing.