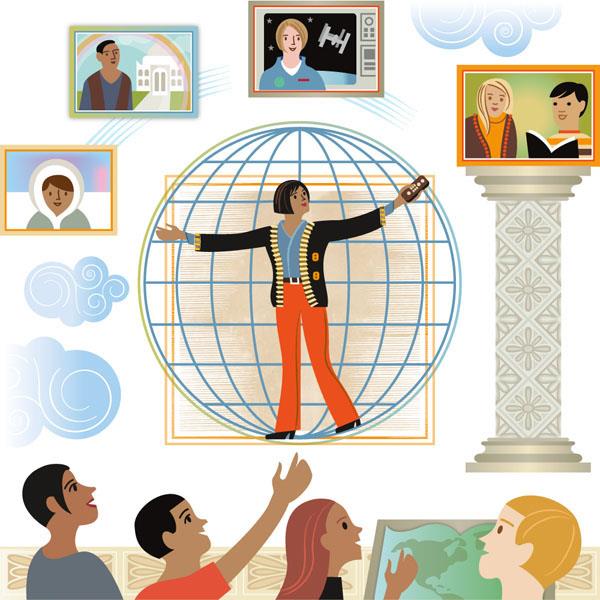 I still remember my mother asking that question when I mentioned one of my early virtual author visits in a phone conversation years ago. Today, there are few corners of the globe where Skype isn’t a well-known verb as well as a noun, describing the videoconferencing platform that connects kids and grandparents on computer screens all over the planet. Those few years have made a world of difference in the way videoconferencing is used in educational settings as well.

In 2009, I’d just started experimenting with Skype author visits with the launch of my first middle grade novel, The Brilliant Fall of Gianna Z (Walker, 2009), and wrote a feature called “Met Any Good Authors Lately?” for School Library Journal (August 2009). It detailed the ins and outs of using Skype to connect readers with the people who create the books they love.

Back then, this was something of a radical idea for many schools. Even though Skype itself had been around a while—it was founded as a start-up in Europe in 2003—the idea of using it as a teaching tool was new. The technology was still spotty in many places; dropped connections were the rule rather than the exception. Not everyone trusted this new way of communicating. Many school districts blocked Skype entirely, while teachers in others had to get special permission to use it for projects. 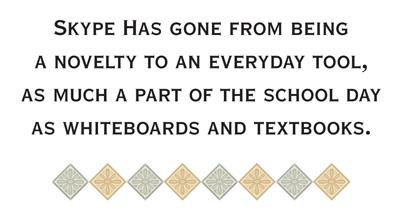 The new world of videoconferencing

Fast-forward five years, and we’re living in a whole new virtual world. Ask teachers and librarians about their experiences with Skype today, and you’ll be treated to a long list of projects, from the traditional Skype author visit to virtual writing workshops, interviews with scientists in the field, Mystery Skype connections, and more. Skype, which is currently free, has gone from being a novelty to an everyday tool, as much a part of the school day as whiteboards and textbooks.

As Skype has grown, the connections have improved; it’s rare to find the screen frozen mid-sentence anymore. In addition, as virtual visits become more commonplace in educational settings, the bells and whistles of the technology are less of a distraction for young readers. Students who are new to the technology are sometimes overwhelmed by the fact that they can see not only the author on the screen but themselves as well.

“A fifth grade class spent the entire 40-minute visit making faces at themselves on their monitor,” says author-illustrator Marty Kelley, creator of The Messiest Desk (Zino, 2009). “I’ve learned to ask teachers to acquaint their class with Skype before my visit.”

Savvy teachers and librarians have been doing this for a while, and now many find that students come to them already having had Skype experiences. That can make for much smoother interactions with virtual guests, even on the most chaotic of days.

“I Skyped with a school on their ‘dress as your favorite book character’ day,” says Sarah Albee, author of Bugged: How Insects Changed History (Bloomsbury, 2014). “So my interlocutors included Darth Vader, a fairy princess, Ivan, and a kid with a Bad Case of Stripes. The teachers were all dressed up, too, and clearly everyone was into it. Best Skype ever.”

Albee was one of dozens of authors who Skyped into classrooms around the world for the organization LitWorld’s World Read Aloud Day (WRAD) in 2014. According to the LitWorld website, the event, observed on the first Wednesday in March each year, “calls global attention to the importance of reading aloud and sharing stories. WRAD motivates children, teens, and adults worldwide to celebrate the power of words and creates a community of readers taking action to show the world that the right to literacy belongs to all people.” LitWorld founder Pam Allyn says Skype author visits have become a big part of that day in the past few years.

“The virtual visits exemplify the spirit of what we believe literacy is in the 21st century and what LitWorld is advocating for: access for all,” Allyn says. “Children all around the country and around the world can experience the joy and pleasure of meeting an author and feeling the profound power of a connected literacy community.”

Sometimes, educators find that the virtual visit technology brings out different students’ voices, too. Those who might not participate in a large classroom discussion may feel more comfortable interacting with an author onscreen, especially when the group is small. Author Lisa Schroeder Skyped with two students and a special education teacher at a middle school in Connecticut after they’d read her novel It’s Raining Cupcakes (Aladdin, 2010).

“One of the girls is selectively mute, and the teacher told me not to expect her to talk to me,” Schroeder says. “She ended up asking me a question, which was a wonderful surprise, as you can imagine.”

The kinds of connections that happen during virtual author visits are evolving, too. While most early Skype author visits were straight Q & A sessions, many authors and illustrators now offer longer presentations that include everything from drawing demonstrations to virtual writing workshops. Publishers, including Scholastic and Penguin, list Skype author visit opportunities that range from visits available at any time to special promotions tied to book releases.

Many teachers and librarians are expanding their Skype virtual visits to include not only authors but experts and mentors in other fields as well. Recognizing an opportunity, Skype set up its “Skype in the Classroom” website, which allows educators to search for guest speakers by location or subject area. Available experts recently included authors, paleontologists, an educator from the Whale and Dolphin Conservation group, rangers from Badlands National Park, a marine robotics expert from MIT, and one of the first oceanographers to use a combination of submarines and robots to map the undersea world. The list is ever-changing and extensive, and it just scratches the surface of what’s available in terms of virtual visits.

Many educators have also had luck approaching experts on their own, via email or social media, to inquire about Skype visits. Sarah Mulhern Gross, an English teacher at High Technology High School in Lincroft, NJ, works with a diverse population of students who have an interest in STEM fields, and has been using Skype in her classroom for four years. When her students read Romeo and Juliet in class, Skyping with Shakespeare obviously wasn’t an option, so she arranged the next best thing—a virtual visit with Ian Doescher, the author of William Shakespeare’s Star Wars (Quirk, 2013), a retelling of the sci-fi classic in the voice of the Bard himself. Gross’s students Skyped with an American living in Niger while they were reading Chinua Achebe’s Things Fall Apart (Heinemann, 1958), and with a local news anchor while they were studying media literacy. 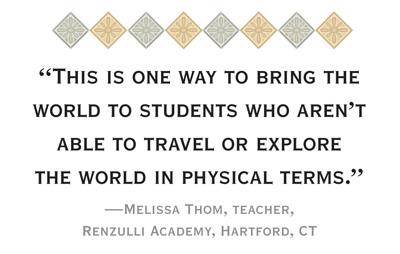 Gross’s most ambitious Skype project centers on David Haskell’s book The Forest Unseen (Viking, 2012). It began with a virtual visit in which Haskell discussed with students his interests in science and poetry and where the two intersect. The following year, Gross ordered copies of Haskell’s book for a joint English-Biology project.

“The students would emulate Dr. Haskell by adopting a square meter of space on our campus and visiting it once a month,” Gross explains. “They would observe the space and write about it each month. Dr. Haskell Skyped with us in the beginning of the year to introduce himself and his book and take questions from the students. Then in May, we Skyped again and approached it a little differently. The students created a slideshow of the experiences and shared it over the Skype call.”