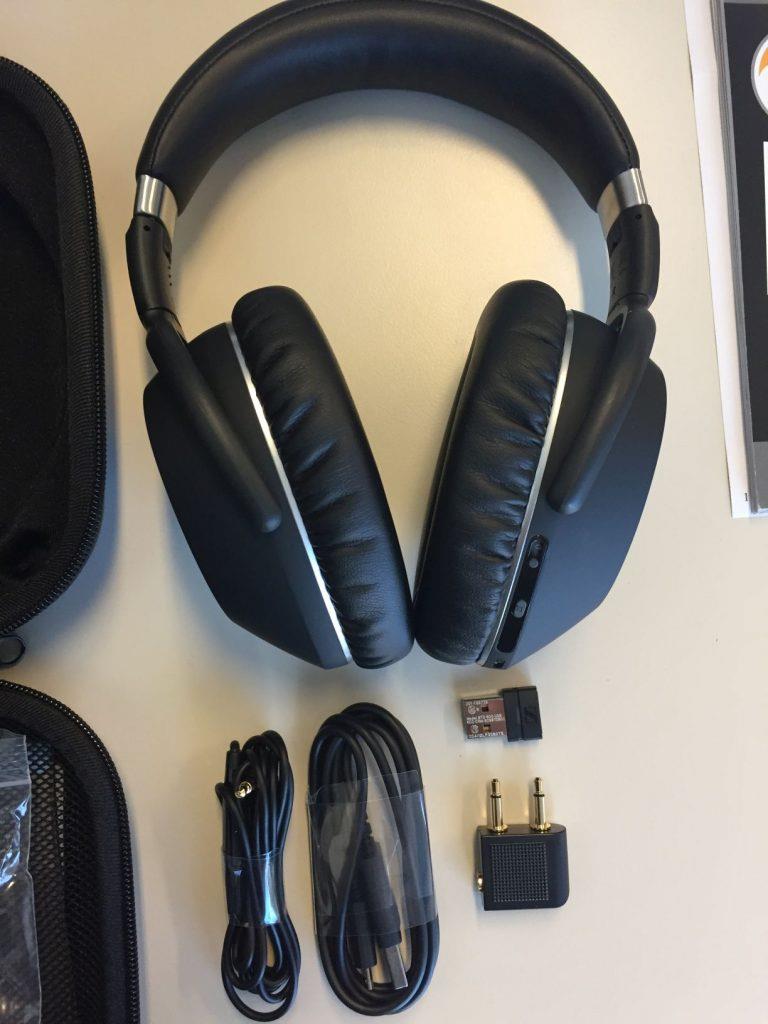 We’ve reviewed Jabra and Plantronics equipment on this blog already. Time for something new!

We know Jabra and Plantronics make Skype for Business-friendly headsets. But who else? As Unified Communications spreads across the business world, there’s plenty of need for headsets, speakerphones, and so on.

Time to look for some additional options. Other headset products we could offer customers. Who did we come up with? Sennheiser!

The German company is famous for high-quality headphones. But it turns out they have a big line of office headsets too. After speaking with them about our interest (and this blog), they kindly agreed to send us some products for testing.

Up first is the Sennheiser MB 660 UC headset.

When I took these out of the box, my immediate thought was, “Woah, Big Daddy headset here!” 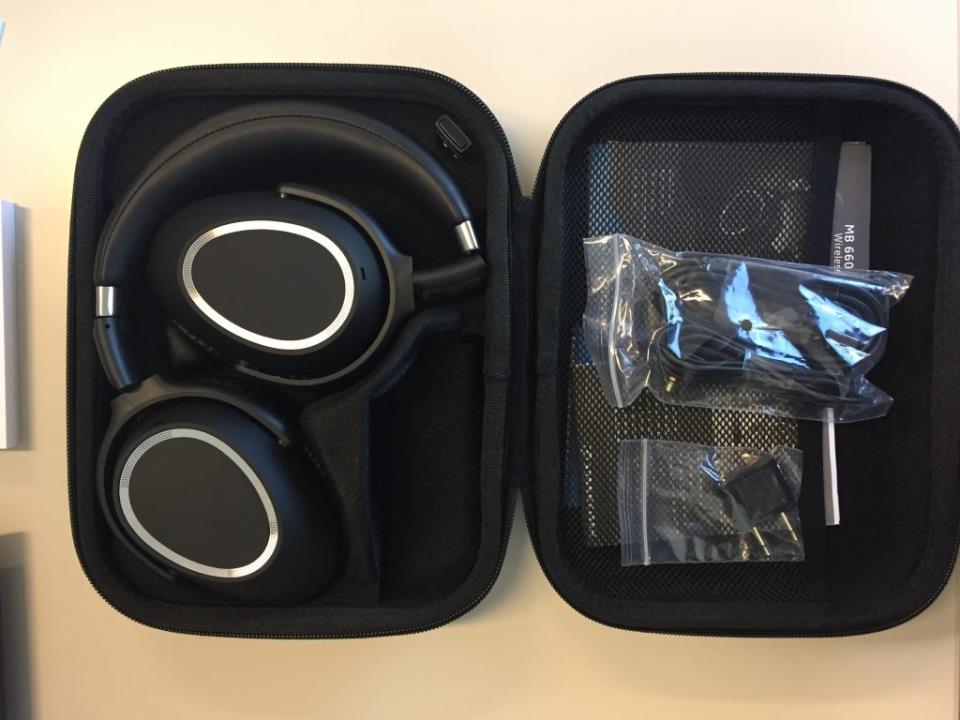 The MB 660 is a Bluetooth Active Noise-Canceling (ANC) headset with a dongle. It takes the form of over-ear headphones. On first glance you wouldn’t even realize they have a microphone built in…but they sure do!

Since I had this headset on loan (thank you to Sennheiser rep Doug for arranging it), I upped my testing to ‘intense’ level. Certain elements only come out after prolonged usage. That wasn’t possible for the MB660s, so I tested as thoroughly as I could.

I’m happy to say that the MB660 not only put up with everything I threw at it, it shone in several areas. Let’s see which they were!

The MB 660 UC is one of Sennheiser’s higher-end headsets. Which should explain why the following feature list is so long. 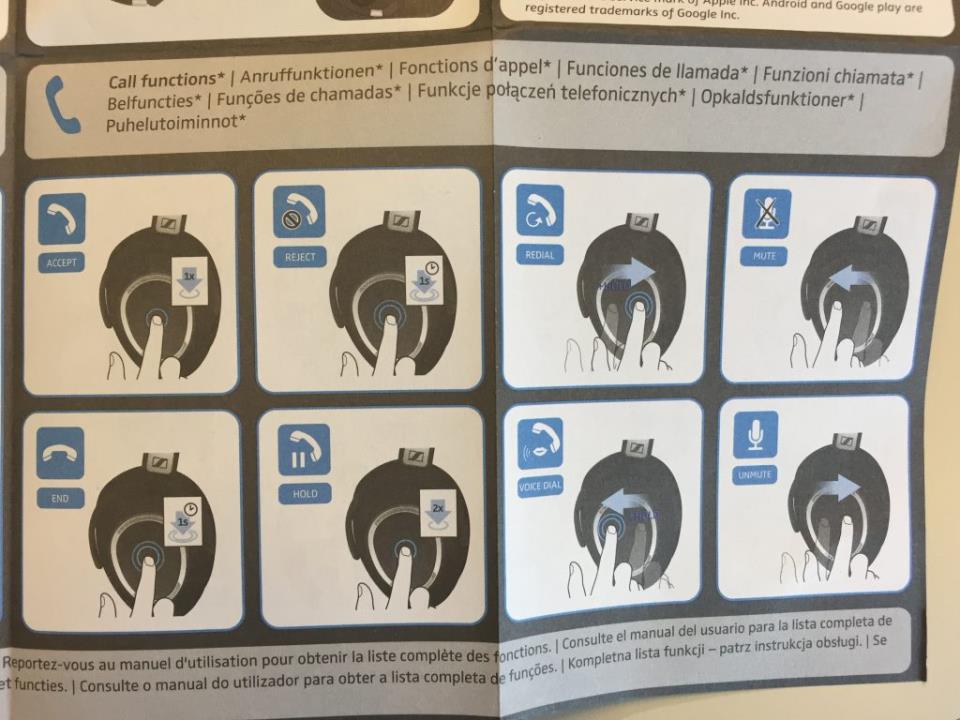 On/Off function built into cups. Instead of an ON/OFF switch, you control power by changing the earcups’ position. Twist them flat and the headset’s off. It will even announce it a second later. “Power Off!”

ANC switch with 2 levels. A switch on the right ear cup controls Active Noise Canceling. At one point I had full ANC enabled, and heard a low hissing sound. Nothing loud…think background noise. I took the headset off—and found that the office A/C had turned on! With the headset off it was its usual roar, but the MB660 muted it down to a low hiss. 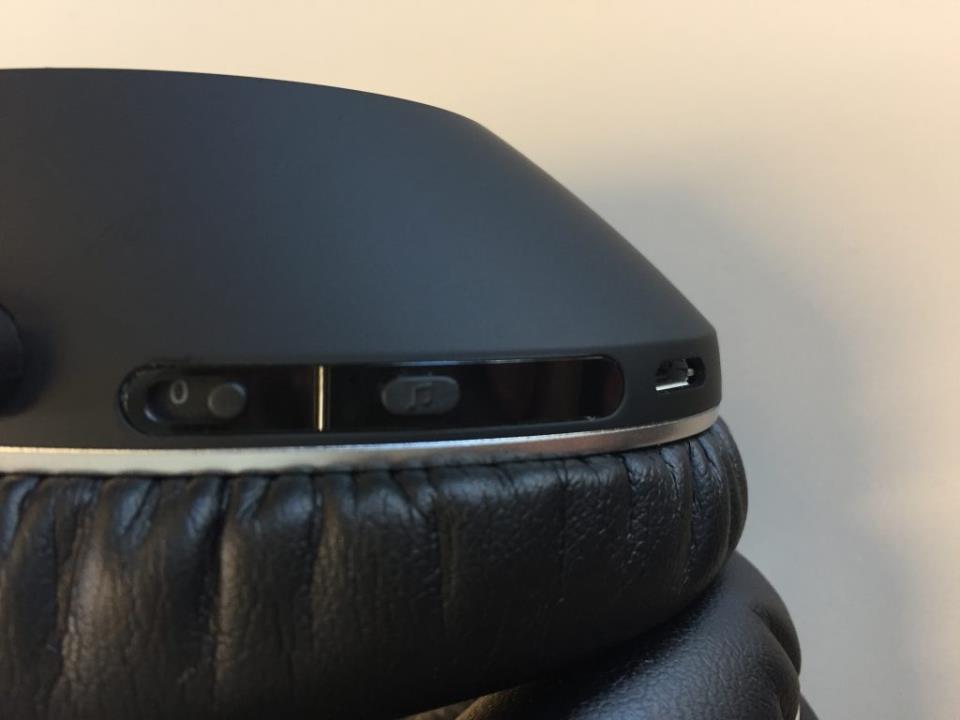 Built-in microphone. It’s not on a boom – the mic is a tiny spot on the right earphone, roughly parallel to the mouth. 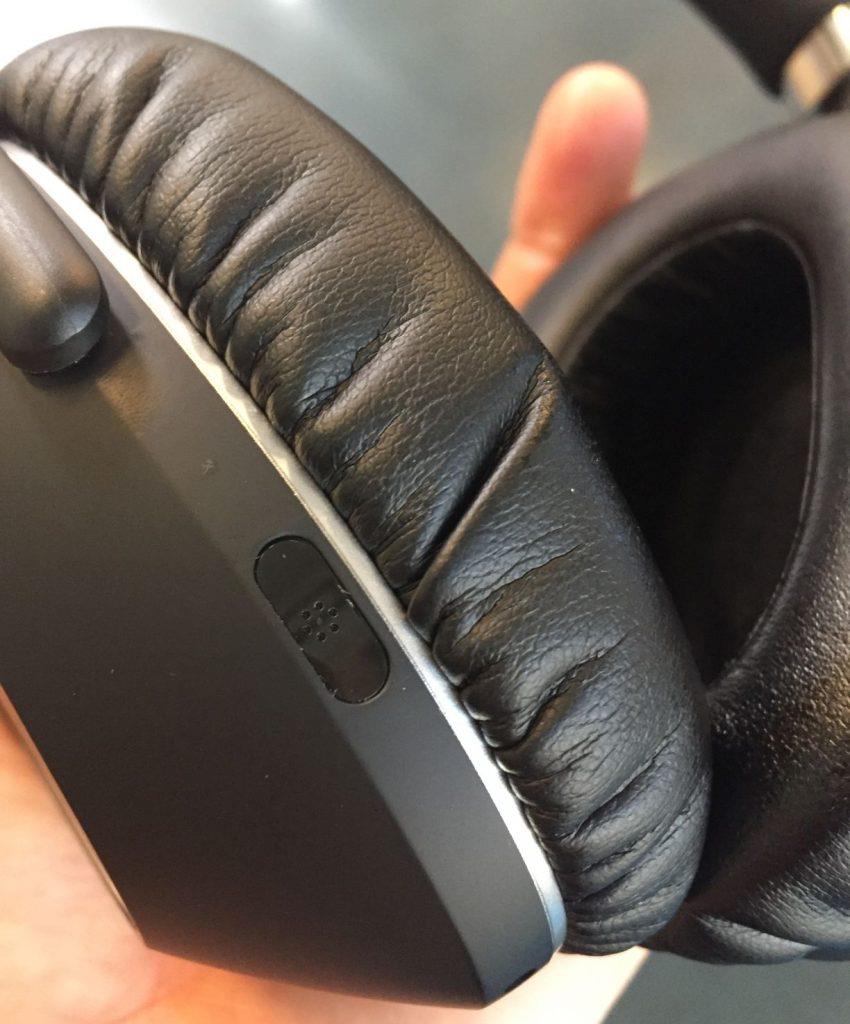 What I found funny was that the voice assistant has a mild British accent. (I was kind of expecting a bold German accent. “Ausschalten!”)

Bluetooth on/off. There’s a simple ON/OFF switch for Bluetooth on the right earphone. If you’re using the dongle or plugging the headset into a phone directly, you can just switch Bluetooth off & save power.

The MB 660 has crazy battery life…up to 30 hours. Despite multiple-hour use every day for 2 weeks, I only needed to charge it (via a standard micro-USB cable) twice!

Wireless NFC and Bluetooth connectivity. The MB 660 incorporates two types of wireless connections: NFC and Bluetooth. NFC works with the included dongle, and with NFC-enabled devices (e.g., some phones). Bluetooth is for everything else.

It will pair with multiple devices simultaneously. I plugged the dongle into my laptop, and paired the MB 660 to my phone via Bluetooth. Two devices connected to one headset. I then switched between both several times, both playing music and making calls. The headset jumped from device to device with only a quarter-second delay.

In terms of signal strength, it was great on Bluetooth and NFC. I walked across the office, and even outside, to test it. I didn’t hear any jitter or breakups in my calls (or music – amusingly, “The Sound of Silence”).

Musical clarity. If you’ve ever used Sennheiser headphones, you’re aware that they make good music-listening headphones across the board. Music isn’t the primary purpose of these MB660s, but they still sound great playing tunes. I had to keep the volume down fairly low…this guy will pump out some serious sound at high volume!

Now, the most important part of this review. How do the MB 660 UCs stack up for call quality?

In short, superb. Calls sounded focused within my head, not gathered around my ears. Voice mails came through as clear as they do from my Jabra headset.

I had a co-worker call me while I was listening to music, so I got to test the “Talk Through” feature. Just one press to the right earcup’s panel, and the music receded into the background. I talked with my co-worker for several minutes. (Ended up pausing the music after a few seconds though. I could hear my co-worker just fine, but it was a good song, and I couldn’t listen to both!)

In another test call, we used our phones. My co-worker used the Sennheiser Presence UC ML headset. He reported that my voice sounded “fuller” in his ear than what voices normally sound like when he uses his cellphone.

Finally, I used the tests given by Troy Thompson on this Quora thread: How can I make a test phone call? – Quora

The MB 660 is different from most other office headsets. Instead of a lightweight pair of ear pads on a thin band with a mic arm, these are beefy over-ear cups with a thick band. Like Sennheiser’s famous HD line of headphones.

The earcups are, in my non-audiophile opinion, a little odd. They’re at a sharp angle, with narrow spaces for the ears. Felt a little strange against my face. But, they did convey one advantage—a good seal for the ANC. 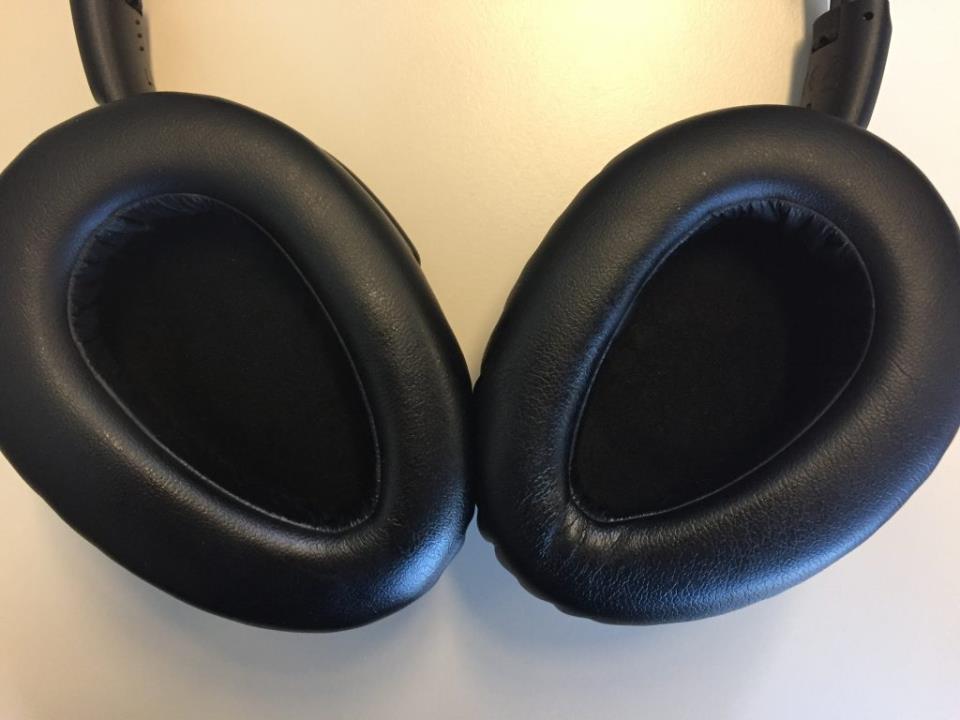 The headset sat a little rigidly on my head, but the ear cups created essentially a curtain between my ears and the outside world. Coupled with the ANC, I could pretty much tune everybody out and enjoy the quiet.

I left them on for a whole day, regardless of whether I had a call or music going. After an hour or so, I began to feel the ear cups pressing on the sides of my face. Never got to ‘painful,’ just a tad uncomfortable. Now, this is a brand-new headset. Some ‘head squeeze’ is expected. It should ease up over time.

(After wearing these for a week, the ear cup pressure lessened more so. I’m aware of the cups, but they’re not uncomfortable anymore.)

No technology is perfect, unfortunately. Even this vaunted headset had a couple (thankfully minor) frustrations.

The Verdict: MB 660s a Super Choice for Long-Stretch Use

I got a little spoiled by the MB 660s. I can walk around the office while on the phone, using my Jabra headset. But with the MB 660s I could do that AND keep distracting noises out via the Active Noise-Canceling!

This headset is a great option for people who need to keep a headset on for long periods of time. Here are 3 examples of people who’d get a lot of value out of the MB 660 UC:

I’ll let Doug from Sennheiser have the final word:

“I see this [the MB 660 UC] as a crossover product. A Bose killer in some aspects, in regards to the traveling business person who likes quality music and noise isolation on a plane, but also a true productivity tool for those road warrior calls, regardless of the environment.”

I do have some more Sennheiser equipment to test. We’ll cover it in another post (maybe two).