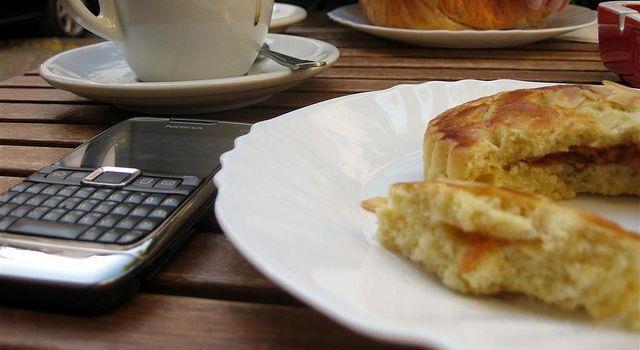 In their early stages, when dedicated office space is unrealistic, unnecessary or too expensive, small businesses and startups tend to frequent coffee shops for their working and meeting needs. It’s nice to get away from the home desk, and a nice café can be just the spot for sparking creativity. But with the increasing amount of coffeehouse commuters, the guidelines for what’s appropriate and what’s just downright obnoxious can be a bit foggy.

Mashable interviewed three coffee shop vets and four coffee-toting, WiFi-using professionals about their best practices for entrepreneurs hoping to mind their Ps and Qs while working from their local café. Meet our group of esteemed panelists:

Read on for our experts’ top tips for keeping your coffee shop usage at a kosher level.

How Much Should I Buy?

With air conditioning, free Wi-Fi, comfy couches, potpourried restrooms and the smell of espresso in the air, a coffee shop can seem like an answered prayer for the bootstrapping entrepreneur. Gratuitous amenities, though, should be appreciated in the form of making purchases and leaving tips for the baristas. The big question, though, is how much should an entrepreneur shell out in return?

Phillips also notes that if you’re camping out at the coffee shop during lunch time, it’s a good idea to eat lunch there.

If your bladder just can’t handle a drink every two hours, Shipley says you can make up for it by tipping well:

“We always make sure to buy drinks, I usually only get two a day, and I’ll often get something to eat. For me, the biggest thing is to tip — I tip very heavily on every transaction, so the baristas are getting paid. This helps the café owners, too, since they obviously have happier and better-paid baristas. And it makes the whole environment very friendly, as the baristas pretty quickly learn to love me and my monsters. (Also, don’t tell anyone, but they’ll start our drinks early when they see us in line.)”

“If you can sit around our shop for eight hours and not be tempted to drink or eat anything, we’re probably not doing it right,” Kasperowicz adds.

How Long Can I Stay?

Short Answer: All day, if you’d like, but get your tail out of there when the café closes.

All of the coffee shop employees we interviewed agreed that they love having customers around. “I’d much rather have someone in my store than have an empty café, even if its the same person the whole day,” says Dunning.

So, if you’ve got work to do, and the store has enough space to accommodate you, be their guest. Shipley recommends establishing yourself as a regular, though, before you camp out all day. “At a new place, I’ll generally only work there a couple hours until they know me,” he says.

In Dustman’s book, eight hours is pushing it, especially if you’re freeloading. If you’re expecting to have a long day, show the baristas some courtesy by letting them know.

But by no means should you ever outstay your welcome. “Past closing time is too long,” says Kasperowicz. “Seriously, there’s no real reason for us to mind you camping out all day, but when the we’re trying to close up shop, it helps tremendously to not have to spend time getting people to leave.”

Can I Take Business Calls?

Short Answer: It’s most polite to take calls outside, but short, quiet conversations are permissible.

Whether via a cell phone or Skype, business calls are going to happen. Phillips, Shipley and Pelsinger maintain that you should almost always go outside to take business calls out of courtesy for the other café guests. But the two factors that get in the way, says Pelsinger, are talking on Skype and winter. “I try to stay within the halo of the Wi-Fi just outside the café, so that I can still Skype on my iPhone,” he says. “As for winter… sorry, bring a jacket and don’t disturb the rest of the patrons of the coffee shop.”

If you’re going to take calls indoors, though, the rest of our interviewees stress: don’t shout. Dunning elaborates:

“You’re looking for that sweet spot, of being in a café that’s busy enough where most people won’t notice, but not too busy that everyone around you can hear your conversation. My general rule as a manager was phone calls of any type were good to go until they were disturbing the other customers. But use headphones. Those conversations are twice as disturbing to other people with another voice coming through your tiny computer/phone speakers.”

Kasperowicz offers up a handy tip: “Do take into account, however, whether the shop has too much background noise to effectively communicate over the phone. We might not mind the sound of your voice, but the person you’re on the phone with might not be able to hear you over coffee grinders, steam wands and music.”

Dustman adds, “We would prefer that people not Skype video because those conversations tend to get a bit more involved and eat up bigger chunks of Wi-Fi bandwidth at the same time.”

Is It Ever Okay To Turn My Computer’s Sound On? 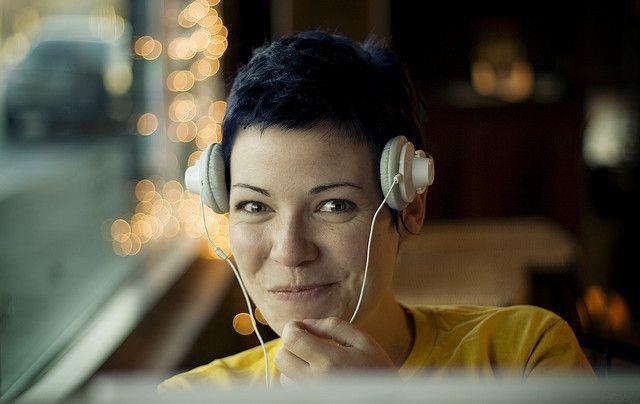 All of our interviewees agreed that you should never use your computer’s sound without having headphones hooked in.

The only exception? “If you’re meeting with multiple people and desperately need them to hear something, it’s not the end of the world, as long as you’re not blasting it,” says Kasperowicz. And even then, it should be a really short sound clip, says Shipley. “I’ll only rarely do, say, a four-second sound clip if I want to show it to someone. And even then I’ll cup my [MacBook] Air’s speakers so I don’t bug people around me.”

In the end, you don’t want to look like a loser, right? Isaf explains, “Everyone just laughs at that person who is holding their laptop up to his ear trying to hear someone on Skype. Use headphones for other people’s sanity and your own dignity.”

What If I Need Extra Seats for My Belongings?

Short Answer: You only get one seat. Put your stuff on the floor.

Okay, we get it — you shelled out for that limited edition laptop bag, and the thought of putting it in the floor makes you feel a bit queasy. First off, if you’re camping out in cafés, but buying top-notch computer accessories, perhaps you should re-evaluate your spending habits. Secondly, get over it. People are more valuable than your laptop bag. Put it on the floor.

Besides the fact that it’s common courtesy, Pelsinger also explains why it may be better for your pocketbook: “In the big picture, using more than one seat and crowding out paying customers is a bad idea. It’ll raise prices in the long term, and likely inspire greater crackdowns on the availability of Wi-Fi, outlets, etc.” He adds, “I also think it kills the sort of café-culture that likely draws most people to do work there in the first place.”

And what if people aren’t around? Is it okay to occupy more than one seat? Shipley can clarify that for you:

“It’s not even okay to set your bag on a chair with the ‘I’ll move it if someone looks at me’ thought, because you discourage people from even approaching the spot. We make sure all our stuff is at our feet, or on our chair in front of us if we’re working standing up at the counter, which we started doing this year. We make darn sure not to even encroach on the spaces around us — like, keep our cups and napkins well ‘on our side,’ so that the places around us look inviting. And we tend to bus dishes for anyone who forgets, just so it doesn’t even appear that we’re staking out an entire table or counter.”

Is It Kosher To Ask Others To Watch My Stuff?

Short Answer: Certainly! They’ll watch your stuff, and you can watch theirs when they need it.

Dunning explains that watching your neighbor’s belongings is “an unspoken rule of coffee shop etiquette.” He continues, “We’re not the airport — it’s perfectly okay to keep an eye on someone’s stuff while they use the restroom or step outside to make a phone call (so they don’t disturb the other guests!). If no one else is in the café, ask the staff. The last thing you’d want is your stuff to disappear because you went to the restroom while the staff wasn’t aware and someone just walks in and walks out with your stuff.”

Kasperowicz warns, though, “You can’t expect them to devote a huge amount of their attention or energy to the task.” So, keep your requests within reason. 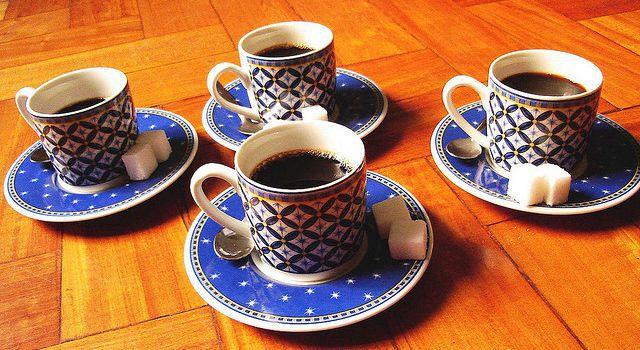 Short Answer: It depends on how many people the space can accommodate, but four is the magic number.

If you’ve spent enough time in the coffee shop at hand, you probably have a feel for how many people it can handle and when the busy hours are. If you’re planning on setting up a group meeting, consult the baristas or call ahead to see if there’s enough space for the time and date you have in mind.

In group situations, make sure to keep the noise level down and purchase drinks or food. Pelsinger suggests, “As a rule though, if you’re with a group of 10 and you are making more noise and causing greater distraction than five groups of two people, try to rein it in a little.”

Dunning and Dustman agree that four people seems to be the tipping point. “Four people can be handled pretty smoothly, both for the lack of table rearrangement and maintenance of reasonable noise levels,” says Dustman. “You can also pull a couple tables for four together to have a meeting for up to around eight people without too much trouble. We would just ask that everyone buy something and help out by putting the tables and chairs back where you found them.”

What Can I Do on the Wi-Fi? 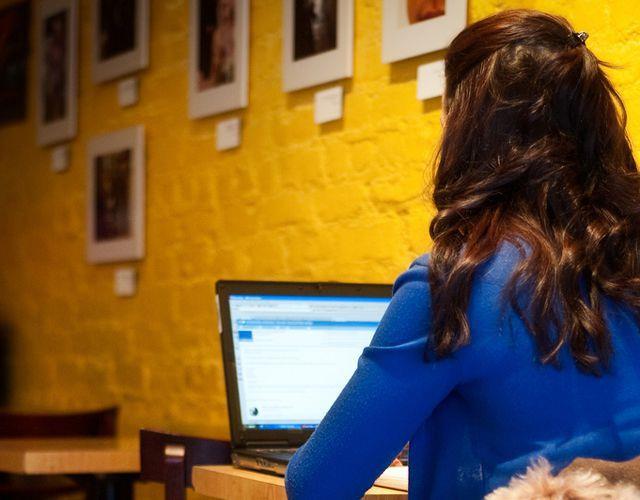 Short Answer: Be considerate, and keep to the basics of browsing the web and checking email.

Be grateful that your local coffee shop offers free Wi-Fi, and show it by limiting the amount of bandwidth you’re using. Dunning puts it very nicely:

“This is impossible for the staff to control, so we depend on everyone to police themselves. But really, we should respect each other and keep coffee shop activities to the basics of browsing the web, email, etc. Uploading or downloading large files, using BitTorrent, or online gaming are not appropriate uses of free coffee shop Wi-Fi.”

Pelsinger adds that continued abuse could lead to more coffee shops cracking down: “Just think about where that’s going in the long term. More and more coffeeshops are limiting access, and to the extent it’s completely wide open, use it responsibly. This means you don’t need to spend the entire time downloading enormous files while simultaneously streaming video and Skyping. As a caveat, if you’ve got your own MiFi card, you can use as much bandwidth as you like.”

Here’s a general rule of thumb offered up by Kasperowicz: “If it’s taking up enough bandwidth that you notice your own Internet crawling at a snail’s pace, that might be too much. However, I think most shops with free Wi-Fi have a decent enough connection to avoid this, and I’ve never noticed it to be a problem.”

We asked each of our entrepreneurs and coffee shop vets to give some final tips of advice for others hoping to master the coffee-shop-as-office lifestyle. Isaf says that in most cases, the trick is to follow the Golden Rule: “Don’t be ‘that guy.’ Everyone knows who ‘that guy’ is … don’t be him.” Here’s a bit of insight to exactly what that means: