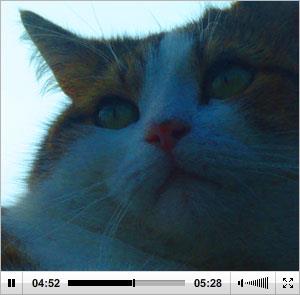 Autostart (currently known as autoplay) is an attribute of embedding code

to determine if rich media should start to play automatically when a page is loaded. There is a bit of confusion about when to use this feature, so I’ve thrown a couple of scenarios on a heap to explain best practices.

When is Autoplay a bad idea?

Generally, it is considered bad form to automatically start a video or audio for various reasons. Scenario 1: a visitor comes onto your page in the middle of the night,  the speakers are set to medium or high. Suddenly your video or audio blasts away unexpectedly. The visitor turns into a panic and doesn’t know what to do while the whole household gets up, wondering what is going on. Scenario 2: You are on the phone or on Skype when the video starts yapping away happily in your headset.  Try to concentrate on the conversation that way. You get the picture, don’t you? ?

The worst way to use Autoplay is to embed rich media while not providing a control bar with a pause- or stop button. This happens quite a lot with audio.  A site owner thinks about bringing some atmosphere to the site by introducing music on the home page. This is often the fastest route to lose an audience, especially if they do not like the music. Give visitors a choice to listen or not, do not impose it on them when they expect it the least.

When is Autoplay a good idea?

OK, if it is so bad, why provide an Autoplay in the first place? There are circumstances which allow audio/video to play automatically.

Scenario 1: You have a list of links to video tutorials or a playlist. Using Autoplay with playlists is a good idea because the visitor is more or less expecting action when clicking on a link in the playlist or on a list of video tutorials. It might even be counterproductive not to start the video on load because it could create the impression something is wrong.

Scenario 2: You have a site with audio samples, it stands to reason that when you click on an audio link, the audio begins to play on load of the page.

Scenario 3: You have a sales page.  It is arguable, but sometimes you have a better result with a video playing from the start on a sales page, notwithstanding the objections in the previous section. The thing to remember is that automatic play can be obtrusive, yet in some cases this is what you need to push sales.  It is like a subscription popup, everybody hates it, but it really works.

How is Autoplay implemented?

Autoplay is used primarily in embedding code. This can take several forms. Since HTML5 became the web standard, the old name autostart is replaced by autoplay, like:

Default, autoplay is false, meaning that if you do not set the attribute autoplay specifically, the media will not play automatically.