When you see a smartphone available on the Home Shopping Network for $99, you might think that it would be something horrible that would fall apart after a month or it would be so slow and crashy that it would be unusable… unless it’s a Nokia Windows Phone. We went ahead and ordered the budget friendly Nokia Lumia 521 to see how it works.  It’s also available from T-Mobile, Walmart and other retailers, but the Home Shopping Network bundles a few extra accessories for a really great price.  Not ony is this Nokia Lumia 521 a really great deal, but there are a few things that actually put it above some of the higher end smartphones out there.  Read on for our full review.

The 512 Megs of RAM is also a bit limiting as there are certain apps that you won’t be able to install. These include many high-end games as well as Zinio’s magazine reader for some reason. 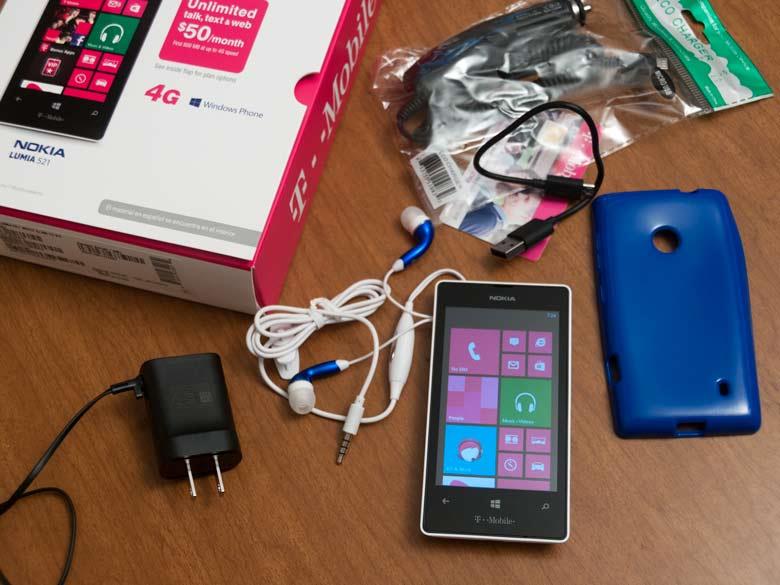 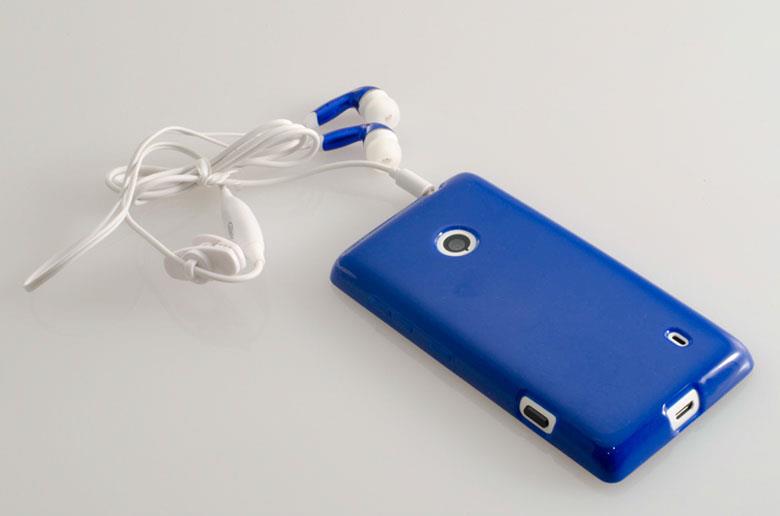 The design of the Nokia Lumia 521 is not terribly impressive or innovative, but that’s not a bad thing. The plastic battery cover wraps all around to the front of the screen for extra drop protection. In fact, while the plastic certainly isn’t premium quality, the build quality feels very solid and rugged. Like most Nokia phones, it feels like it could take a fall and keep on going.

At the top you’ve got the handset speaker along with some sensors, there is no front facing camera, but Skype will still work. You just have to point the rear camera into a bathroom mirror. Then you’ve got a 4 inch WVGA screen which isn’t very impressive. Outdoor visibility suffers a bit too, but it is still usable with gloves on. At the bottom are the usual Windows Phone capacitive buttons for search, start screen, and back.

On the right side there’s a series of plastic buttons protruding from the edge for activating the camera, power, and volume up or down. The buttons are easy to find with your fingers and they’ve got great tactile feedback.

On the bottom there’s the micro USB port for charging and syncing.

The left side has nothing but plastic.

On the top is the 3.5-millimeter headset jack.

On the back is the 5 megapixel camera and speaker hole. There is no flash so you’ll only want to use the camera outdoors with a good amount of light.

Under the battery cover you’ll find the fairly common and very inexpensive-to-replace Nokia BL-5J 1430mAh battery, along with a Micro SIM card slot, and a Micro SD card slot where you can add up to 64Gb of extra storage for photos, videos, and music.

While the Lumia 521 is pretty thick compared to other higher end phones, its smaller screen keeps it feeling just fine in the pocket.

I already mentioned how the RAM limitation may cause certain Windows Phone 8 apps to be incompatible with the Lumia 521, but there are also some interesting limitations to some of the Nokia apps. For example, the augmented reality view in Nokia’s HERE Maps app is not available, nor is City Lens and the augmented reality feature in the included Weather Channel app does not work.

Another feature that’s probably worth the cost of the phone is the Nokia Music app. You can download up to 4 custom radio mixes for listening to offline. Then when you get tired of those, you can delete them and download 4 more. It’s unlimited offline music! The catch is you can’t rewind any songs. You have to listen to the whole playlist, though you can skip about 6 per hour. Still, that’s free music with no data plan!

The only T-Mobile customization that’s really worth mentioning is the Wi-Fi calling feature. If you turn this on, you’ll be able to send and receive voice calls and text messages over any Wi-Fi network with enough bandwidth. You don’t need the cell towers outside at all to make calls. It’s a little unreliable though, so I would only turn this on when absolutely necessary.

Surprisingly, the Lumia 521 received Nokia’s “Amber” firmware update as well as the new Windows Phone 8 GDR2 update on 8/14/2013.  These updates bring even more features and capabilities to the Lumia 521.  It now includes Data Sense with the ability to see which apps are using what amount of data, a feature for mapping out nearby Wi-Fi access points, and the option to limit data usage when you’re near your quota. You also get an FM Radio tuner for listening to the radio when headphones are plugged in and the ability to set the default camera app.

We’ve already mentioned the 5 megapixel camera with no flash, and you would probably expect it to be pretty horrible. Actually, we’ve always found those little LED flashes often included on phones to be pretty horrible themselves. Not having a flash on this phone forces you to only take pictures in decent lighting conditions and if you pay more attention to existing light you can actually get some great pictures with this camera. Most of Nokia’s special camera apps are included as well. You’ve got Smart Cam, Panorama, Cinemagraph, and the Creative Studio for post processing. 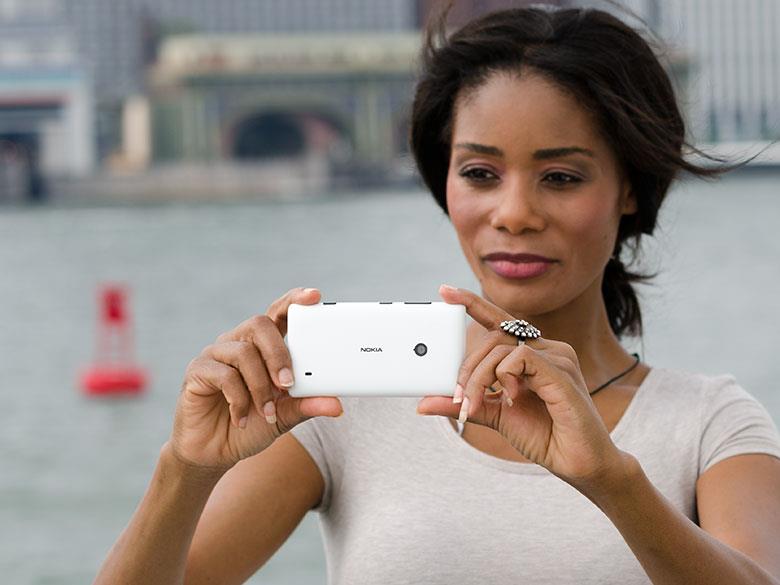 The Nokia Lumia 521 scored 169.25 in WPBench, compared to 234.73 on Lumia 928  or 232.11 for the Lumia 925. The Lumia 521’s score seems a lot lower than other Windows Phones and you would expect that for the price, but in normal usage everything is still buttery smooth. If you put the device side by side with a more expensive Windows Phone, you’ll certainly notice that the Lumia 521 does not perform as well. The screen doesn’t move quite as fast as the PureMotion HD displays of higher-end Nokia phones of course. Still, it’s quite usable and pleasant.

In terms of battery life, the Lumia 521 does quite well with average use. It’s certainly enough for a day and the device doesn’t have any terribly power hungry features like a high resolution screen or image stabilization. The key thing here is that the Lumia 521 has a removable BL-5J battery which is pretty common in older Nokia phones. You can get another one for about $4 and swap it out whenever.

The Lumia 521 doesn’t support LTE, but it still works with T-Mobile’s 4G HSPA network, and for such a budget device like this, that’s plenty. If you’re in the market for this kind of phone you probably don’t want to pay a lot for internet access anyway, so a slower speed is really an advantage for keeping your monthly bill a bit lower.

We bought our Nokia Lumia 521 from the  Home Shopping Network for a very cheap $99. The price ranges between $149 and $99 and currently it’s available for $119.  To be clear, the HSN version also bundles a lot of extra accessories while other versions may not include as much stuff. You can also get the phone from  T-Mobile with a prepaid SIM starter kit for $204 which includes $50 worth of minutes. Optionally, you can get it  for $0 down and $6 per month for 24 months with your T-Mobile rate plan.

For $99, grabbing this device is a no-brainer. Even if you already have a much better and expensive smartphone, maybe you’re curious about how Windows Phone 8 works or maybe you want an extra device for plugging into the stereo and playing MP3s off the MicroSD card, streaming Pandora, or playing unlimited offline free playlists from Nokia Music. Or maybe you don’t care about awesome camera capabilities, processor speeds, pixel densities, millions of apps, etc., and just want an inexpensive and worry free smartphone that will handle phone calls, emails, schedules, music, notes, and social networking without much frustration. The Nokia Lumia 521 is a great buy for any of those options.