Last week Skype announced some changes to their developer program. In that post I mentioned that the only application to date where one could experience SkypeKit Desktop in action was a beta version of Trillian for Windows. Earlier this week Trillian released version 5.1 to the Skype Apps Directory.

Trillian aspires to become a single client for all your conversation, messaging and social networking activity, whether on Skype, Google, Facebook, Live Messenger, Four Square, several email services and many others. And there are versions for Windows, Mac, iPhone, Android, BlackBerry and the Web. Ideally it would replace several individual clients and be accessible across multiple platforms.

Having set up an account that has been active for about a week here are some observations:

Trillian is well along the path of providing a single client for multiple applications and services. It runs on not only PC’s but also iOS5 and Android devices. Its Pro service allows you to track all your conversations on any of these devices. However, Trillian for Mac does not yet have any Skype support (even in a beta version) yet the SkypeKit API’s are available. One cannot expect Skype support any time soon on iOS5 and Android devices as Skype has yet to release any API’s for working with these devices.

Trillian for Windows 5.1 Preferences | Accounts screen provides an overview of how it may be set up: 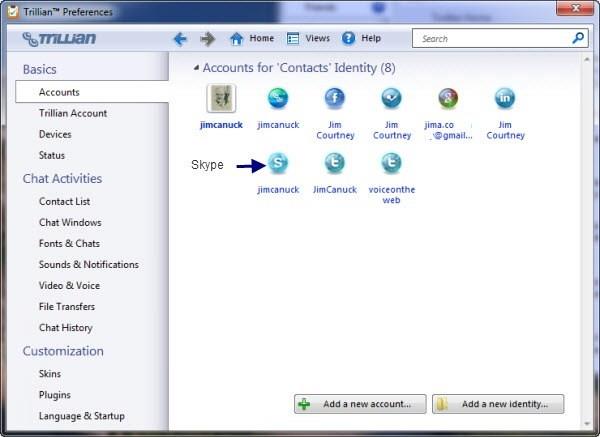 The main Trillian menu showing all the applications and services to which I have logged in along with an example of my Twitter feed: 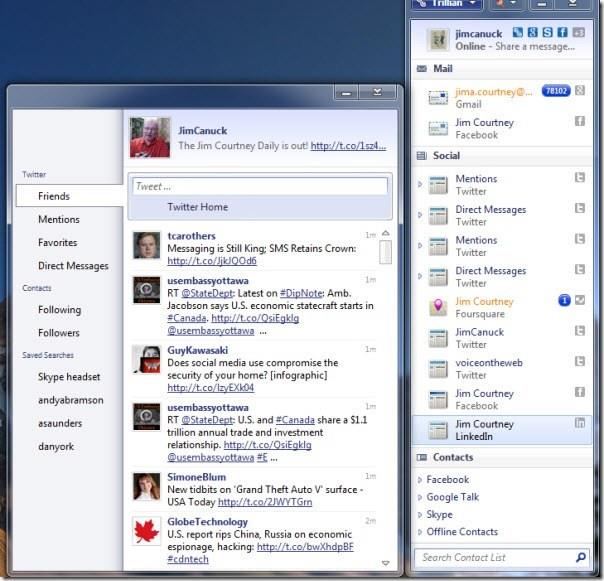 All the “Contacts” menus were compressed to demonstrate the various options available for messaging. Double clicking on any of the social networking accounts brings up the relevant feed in a separate window as shown. 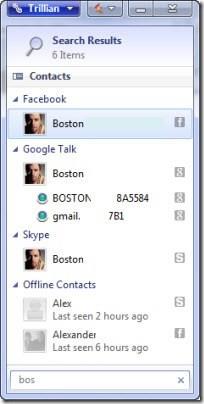 As shown in the menu at the right Trillian is a good way to find a Contact’s “current” status on all their social networking and messaging applications. Simply filter down with a (partial) name and you get this. In this example Boston is online in Skype, GTalk and GMail and Facebook while Alex is offline in both.

With Google applications, logging in and out can result is some strange identification such as “gmail.51AC27DE”. It simply indicates, in this case, that the contact can be accessed via GTalk or GMail simply when s/he is logged into either. In fact, this also happened with someone who contacted me through the new Google+ chat feature where the identification under Google Talk starts with “TalkGadetC85….”.

With Trillian open or running in background you also have the option to receive small notification windows at a designated corner of your desktop as a feed is updated or an IM message is received. This can be annoying and distracting; it requires some discipline to ignore it. There are options in the preferences for turning these notifications off.

During a Skype voice call the user interface contains all the features associated with Skype calls: 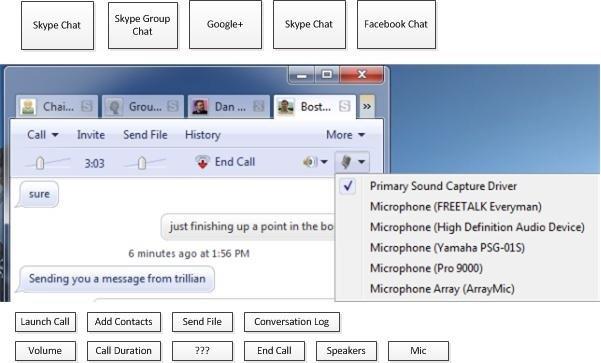 One final observation: when you go to Task Manager | Processes you see this when SkypeKit is being used:

Small footprint relative to Skype (which was also open when this screen capture happened). As a matter of interest trillian.exe is using about 29,000K of memory. But this is without any video support; it will be interesting to see any change once Skype video can be accessed via Trillian.

Bottom line: Trillian is certainly well down the road to becoming a universal messaging and social networking client. And it gives an initial feel for how SkypeKit can be deployed in a desktop application. For those who use multiple applications it can become the default IM/social networking client; in fact, “Boston” in the example above has done so as he follows both Skype and Facebook for chat. Currently he still needs to open Skype for video calls.

The Big Brother feel: And if you were wondering where Dan York is active as I write this (he had Google+ open in two browser windows): 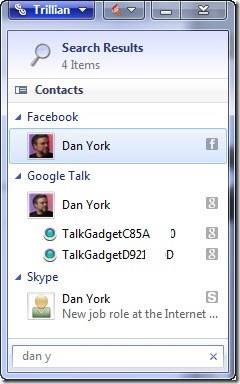