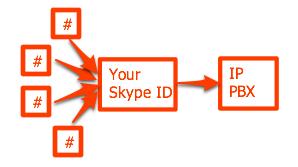 NOTE: I have a few updates to the post that I am putting at the bottom of the text.

For a company that only a bit over a year ago was saying that customers weren’t asking for interconnection, today Skype has done something rather dramatic and lowered their walls a bit more with the announcement of the beta program of “Skype For SIP”. With this announcement from the “Skype For Business” group, companies with SIP-enabled phone systems will be able to receive calls from Skype users – and make calls using Skype’s network at Skype rates. The news release (and blog post announcement) highlights these four aspects:

Let’s take those one at a time – and then take a look at some details and what’s missing.

From a Skype users point-of-view, they are simply calling another Skype ID. It’s a free call that seems just like any other Skype call.

In any event, this aspect of the service makes it so that any Skype user can call your IP-PBX.

The second aspect of the “Skype For SIP” service is that you can use Skype’s global network for connections out to the PSTN… what we have been generically calling “SIP trunking” for some time now. As part of the Business Control Panel registration you will apparently indicate which Skype ID is to be charged for outbound calling (what we used to call “SkypeOut”) and then any outbound calls via SIP will be charged to that account.

The already crowded “SIP trunking” market just got another big player. Configure your IP-PBX to send calls out across Skype’s network to the PSTN… and start calling. Right now the plan as I understand it is that you would pay the regular SkypeOut rates, without the subscription plans that are available to individuals. Skype’s Moore did say that they may evaluate some form of plans during the beta period. As we see all these various details, we’ll have to see what impact this will have on the existing players.

For $60 per year per online number.

(This assumes, of course, that Skype keeps the current pricing for Online Numbers and doesn’t charge any additional costs.)