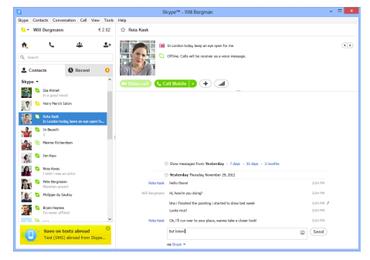 On February 13, Microsoft’s Skype team rolled out two new updates, both labeled as version 6.2, for Windows and Mac.

The Windows version includes a redesigned top toolbar that brings together main actions, like calling phones, creating groups and adding contacts. It also includes “eGifting,” or the ability to send Skype credits to users on their birthday which the recipients can use any time.

Another feature in the Skype 6.2 for Windows release includes the option to send an instant message using ctrl+enter. This version drops support for PCs using Intel Pentium 3 or similar CPUs which don’t support SSE2 instructions.

The Skype for Mac 6.2 update includes the same eGifting capability. It also adds support for one-way SMS without the addition and verification of the user’s mobile number.

The Mac update includes several bug fixes, including problems with signing out of Facebook, and issues around the display of Messenger contacts in a Skype contact group.