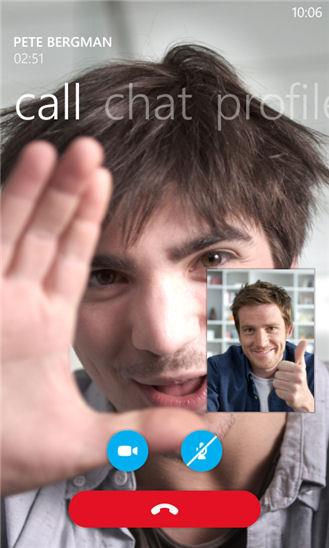 We’ve heard loud and clear how eager everyone is to get their hands on the Windows Phone 8 app as soon as possible.

So today, we are excited to announce the availability of an early, preview version of Skype for Windows Phone 8. In this Preview, you’ll get all of the Skype basics in the new, modern design along with many of the new features such as integration with the People Hub and a combined contact list with buddies from Windows Live Messenger.

As the video embedded below shows, Skype on Windows Phone 8 is a huge improvement over Windows Phone 7. It now becomes viable to completely integrate Skype messages and calling into your mobile communication experience, rather than thinking of Skype as a distinct, and separate, experience.

The preview version can be seen as a beta, which means stability is not guaranteed, and some features may be changed before the final release. However, it does include what Microsoft describe as the three key experiences of Skype on Windows Phone 8: “always reachable, easy to use and your people at your fingertips”, which are “being made available on a smartphone for the first time”. While Skype is available on other mobile platforms, it’s clear that Microsoft’s mantra is that you’ll get the best Skype experience on Windows Phone.

The “always reachable/always on” element of the app means that, once you’ve signed in, the app will run in the background. Users are notified to new messages via Toast notifications and incoming Skype calls use the same style of calling screen as cellular calls. Tapping on a notification, or answering a call, will open the Skype app to the appropriate screen.

Optionally, a Live Tile, pinned to the Start Screen, can be used to show information about incoming messages and missed calls (Skype events). Similarly, there is support for notifications on Windows Phone 8’s lock screen. Skype is also integrated into the People hub, with Skype contacts automatically linked to your existing contacts, and a Skype entry (voice, video, chat) added as one of the action options on contact pages.

The integration is not perfect – for example, Skype calls are not shown in the Phone app’s history section, although a full listing, including messages, is available within the Skype app itself. In addition, your Skype status (available/invisible) can only be set from within the application – it is not currently, as might be expected, tied into the chat status setting in the Me Tile. 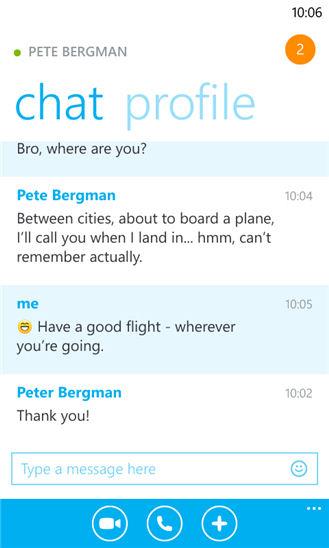 The preview release can be downloaded from the Windows Phone Store. Microsoft say an update to the full version will be released “as soon as possible”.

We’ll take a closer look at Skype for Windows Phone 8 in a full review, once the first full release is available.