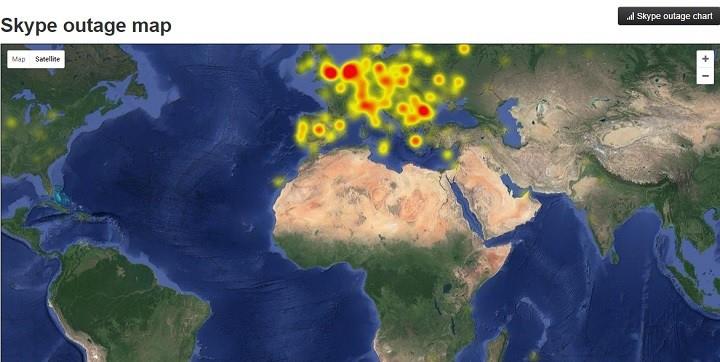 Skype is currently down for thousands of users worldwide. If you’re struggling to connect to your Skype account, you’re not the only one.

However, the issue still persists for many users, particularly in Europe.

As a quick reminder, Skype has been down for more than 16 hours now, with the first users reporting the problem on Twitter yesterday. It seems that Microsoft is taking its time to fix this issue. Interestingly enough, although Skype is down, the ads in the app are working fine.

At the moment of writing this update, there is no official explanation as to the cause of the problem. However, many Skype users are convinced that the current connectivity problem is the result of a massive DDOS attack.

UPDATE 2 (June, 21) : Skype is still not fully functional, more than 24 hours after users reported the first connectivity issues. Microsoft posted an update on the official Skype blog, informing users that:

[UPDATE Jun 20, 2017 20:00 GMT]: We have made some configuration corrections and mitigated the impact. We are continuing to monitor and we will post an update when the issue is fully resolved.

Although the main connectivity bugs seem to have been fixed for most users, there are still some minor bugs that limit the Skype experience. The ‘Updating conversations’ message prevents users from sending and receiving messages.

You can read the original article below.

Skype has been down for about an hour now, and Microsoft has already acknowledged the problem.

Hello, we are aware of an incident where users will either lose connectivity to the application and may be unable to send or receive messages. Some users will be unable to see a black bar that indicates them that a group call is ongoing, and longer delays in adding users to their buddy list.

Users have taken their frustration to Microsoft’s forums, describing the issue and asking for help.

Has anyone found a solution to this problem? I was able to use skype fine until now and today I can log in but it just stays in the “connecting” mode.. This is really frustrating as I am using skype for work. I have tried changing firewall settings for skype but nothing seems to help.

And of course there is no support from skype so just have to hope someone has a solution here..

Unfortunately, if you can’t connect to Skype, there is not much that you can do about it. This is a general problem coming from Microsoft’s servers and all you can do is wait until the tech giant fixes it.

The Skype connectivity issue is affecting users worldwide. Millions of users rely on Skype to connect with their friends and business partners. Hopefully, Microsoft’s engineers will fix this problem as soon as possible.

We’ll keep an eye on the official Skype website and we’ll update this article as soon as new information is available.

RELATED STORIES YOU NEED TO CHECK OUT: