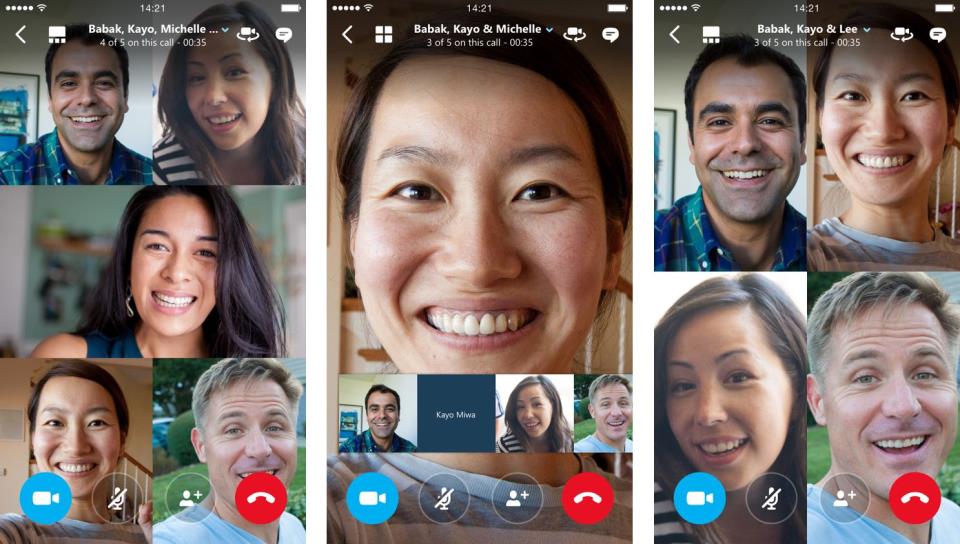 According to Microsoft, this feature will allow Skype users to video chat with up to 24 other people at once in crisp 1080p resolution, and each participant can flip between the front and back camera mid-call.

Group video calling in mobile Skype apps is going to be available to users in North America and Western Europe. “We plan to be fully available worldwide in March,” said Skype.

“A view of what you’re broadcasting is always pinned to the lower right hand corner of your screen, and as more and more people are added, the call’s grid view dynamically adjusts to show you as many participants as it can,” explains Engadget.

With more than seven participants in the call, Skype’s interface will highlight the person speaking by default while putting all the other participants at the bottom of the screen.

Interestingly, you can then swipe through the participants lined up alongside the bottom and pin anyone to the screen in case you dislike Skype’s default choice of the pinned video.

For optimal experience and bandwidth usage, the calls are optimized specifically for the device you’re using. And thanks to Skype’s SILK Super Wide Band audio codec, you should enjoy crystal clear audio.

Group video calls are subject to a fair usage limit of 100 hours per month with no more than 10 hours per day and a limit of 4 hours per individual video call. Once these limits have been reached, the video will switch off and the call will convert to an audio call.

In addition to group video calling, Skype’s mobile apps now support a feature Microsoft announced in October 2015, which lets you invite anyone to join a Skype chat by sharing a unique link, even if they’re not on Skype.

All you need to do is start a chat on your iPhone, iPad or Android and share the unique conversation link however you want — via email, WhatsApp, Messenger, Twitter or Facebook. If they have Skype, they’ll join your conversation by clicking on the link and if they don’t, they can join the group video call on a computer using Skype for Web.