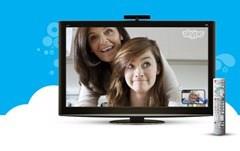 Two years ago at CES 2010 Skype announced Skype for TV with two partners (Samsung and LG). It was only available on very high end Internet-enabled TV sets and required vendor-specific webcams. Effectively the cost of adoption was over $1,500. CES 2011 saw an expansion of the number of TV set vendors (Panasonic, Toshiba, Sony, Vizio) and the support of Skype for TV on BluRay DVD players from Panasonic and Sony, bringing the cost of adoption down to about $400 for the player and a supporting webcam.

One other complication was that all these offerings required a webcam that was specifically designed for the individual TV/player vendor. At a July 2011 panel discussion, Skype President Tony Bates mentioned that Skype for TV was installed into over 50 million TV sets; however, again these were mostly high end sets with a price point that did not encourage mass consumer adoption.

At CES 2012 there were some demonstrations and announcements that effectively make it possible to enable every television set to support a Skype for TV video or voice call at a much more reasonable cost: 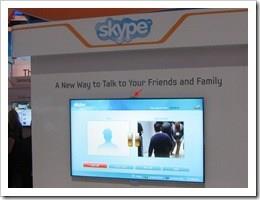 Samsung was demonstrating Skype for TV where, as shown on the right, the webcam was embedded into the top frame of the television set. While apparently still supporting Skype for TV, there were no demonstrations in the Toshiba or LG booths.

Panasonic and Sony had new versions of their BluRay player, as well as new firmware supporting Skype for TV on their Viera and Bravia lines respectively. As shown in the video below, Panasonic’s firmware allows you to watch TV during a Skype call where you can switch the audio between Skype and the TV channel audio within the context of the conversation.

A couple of the booth personnel mentioned that the one feature missing in a world where all TV vendors are actively encouraging 3D TV was the ability to adopt Skype for TV to 3D; apparently many of their other “smart TV” social networking applications somehow have the ability to “upscale” 2D to 3D. Not something I’m holding my breath waiting for, especially given what the webcam requirements would be.

Bottom line: The launch of products lowering the adoption cost of Skype for TV, especially on existing TV sets, significantly expands the potential user base of Skype for TV, not only for consumers but also for business use. The number one advantage is the ability to hold video calls where the other end point can be a PC, smartphone (iPhone, Android phone) or tablet – or another TV set that supports Skype for TV.

While the webcams for Skype for TV are currently vendor-specific, it appears that the ability to use a generic Skype-certified webcam should appear later this year on the Sony devices. On the other hand TelyHD offers a complete solution in one hardware package.