When I started through the major TV manufacturers’ area yesterday afternoon I did not intend to be writing a post about Skype for TV. However, it quickly became apparent that several manufacturers had, at a minimum, a display panel or two where Skype for TV was running in some fashion. After three hours of wandering the main hall I had seen displays of Skype for TV at five booths: LG, Panasonic, Toshiba, Samsung and Sony. Three of these, Panasonic, Samsung and Sony, had been mentioned in Skype’s CES press releases, along with Vizio. It leaves to question whether LG and Toshiba have any “endorsement” from Skype. (I also saw a demonstration on a Vizio set in a private suite).

Panasonic’s demonstration was done using their forthcoming Blu-ray player showing not only video calling but also “video mail” where unanswered calls could result in leaving a video message for the recipient. It’s all covered in this demonstration: 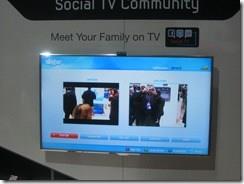 At the Samsung booth there was a pod with Skype for TV on two adjacent sides (shown on the right). The demonstration was on their forthcoming D-series (D6000, D7000, D8000) which will replace the current C-series sets at retail later this spring. The sets themselves incorporate a wide ranges of Internet features with an emphasis on social networking and on-demand audio and video. (Yes I’m in the right hand image taking the photo.) For the D-series, Samsung was using a new proprietary webcam that was the narrowest of all the TV webcams on display. 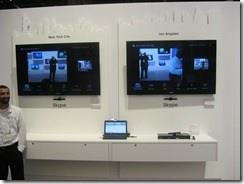 In this case, while a Samsung representative was available to answer questions, there was no active demonstration of setting up calls, etc. As a result we don’t know the feature extent of the supporting firmware.

At CES it was announced that Skype for TV would be included in new Sony BRAVIA series TV’s; while they had a demonstration in their BRAVIA section (shown on the left), it was simply again an ongoing video call with no real demonstration. Note the webcams sitting underneath the TV screens. While they had announced a Blu-ray player that would incorporate Skype for TV, they had nothing to demonstrate.

Finally there were two demonstrations where there has been no official announcement from Skype.: 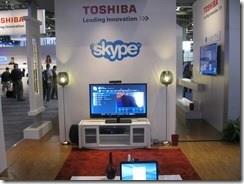 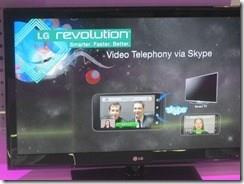 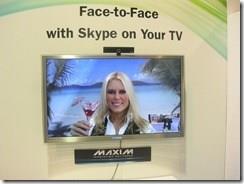 Sunday afternoon I came across another demonstration of Skype for TV at the Maxim booth. Maxim is an OEM supplier of webcams to various branded vendors. Their press release associated with this booth provides some insight into the future of Skype for TV:

In addition to pushing the technology curve, Maxim is helping Skype TV technology gain rapid adoption by making it more affordable and reducing time-to-market for TV manufacturers wanting to add Skype functionality to their TVs.

“We think that it makes a lot of sense to embed the camera in the TV itself instead of as an accessory, and several TV makers are headed this way already,” said Brian Gannon, executive director of business management, Maxim. “Maxim‘s new web camera solution, with its small footprint and very low cost, will simplify this task for our TV customers.”

At CES 2011, Maxim is demonstrating a number of new technologies immediately applicable to new Skype on TV designs. In addition to showing the industry’s smallest camera for Skype-enabled design, Maxim is also demonstrating new features like Multi-Party Video, Face Tracking, Gesture Recognition and 3D Capture in its private meeting room at the show.

As an early Skype partner, Maxim does not limit itself to enabling Skype on the TV, but is also working to enable Skype on a wide array of devices.

Bottom line: Definitely Panasonic wins the Voice on the Web award for best display of Skype for TV at CES 2011. But it is also apparent that Skype is becoming an essential service that will be embedded into any brand of TV should the hoped for “Internet TV revolution” actually start to get some buyer traction. Yet, it’s still early to see how quickly demand would build for these sets such as to trigger a “must have” scenario that would accelerate replacement of legacy TV’s (even early HD TV’s). And one outstanding question: Skype for TV currently supports voice and video calling along with presence. Will we eventually see a way to also incorporate Skype chat?