If you use Skype on Windows Phone, the coming update to Skype for iPhone, which Microsoft says it will deliver sometime next week, will look awfully familiar. That’s because the app is being updated to be more consistent with the other mobile versions of the app.

Skype 5.0 for iPhone is now available from the Apple App Store, Microsoft says.

And that’s probably a good thing. The current version of the Skype app isn’t exactly iOS-friendly anyway, and with more and more online services promoting their branding and style over native OS controls—witness the Facebook app on Windows Phone as a typical example—Skype’s new design is at least consistent.

“The new Skype for iPhone is the most refined version yet,” a post to the Skype Garage & Updates blog notes. “It has all the visual finish that iOS users expect, smooth animations and even a few features that aren’t just new for this version, but new to Skype altogether.”

First up is the consistent experience. Consider the following shot, which displays Skype for iPhone (today), Skype for iPhone (new version) and then Skype for Windows (on the right). As you can see, the new version (middle) looks more like Windows Phone than the current iPhone version of the app. 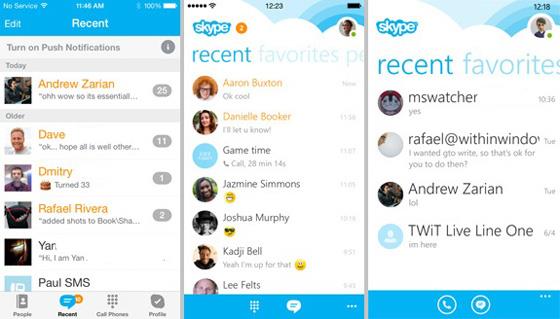 But while the UI is consistent with Windows Phone and Android and “coherent,” Microsoft notes that it’s also been written from the ground up (which should alarm anyone familiar with Skype) and customized for iOS. So it offers up to 5 times the performance of the current app, provides smoother transitions between views, and is smarter for those who use—and are annoyed by—Skype on multiple devices.

“This is the biggest change ever to Skype for iPhone, and soon we will be delivering a new iPad version too,” the post notes. “Skype for iPhone will be available globally in about a week.”