Continuing from a previous post this article moves into the installation and configuration of the Skype for Business Server components for a Standard Edition Front End server.  As with the previous article any mandatory steps are identified by bulleted paragraphs while non-indented steps for validation and educational purposes are optional.

The second article in this series will cover the following deployment steps:

Before performing these steps in this article make sure to successfully complete all of the prerequisite actions covered in Part 1 of this series.

Before installing any additional server components the Skype for Business topology must be defined. 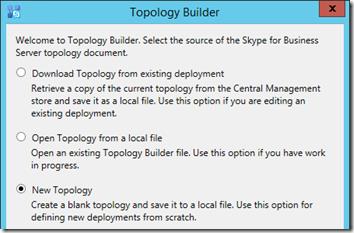 Add any additional desired SIP domains at this point , but a single SIP domain is sufficient for most deployments as well as this series of articles.

At this point the Define New Front End Pool wizard should be automatically launched. 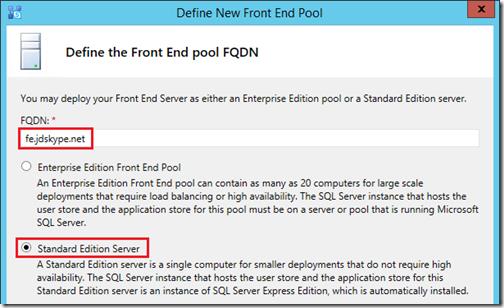 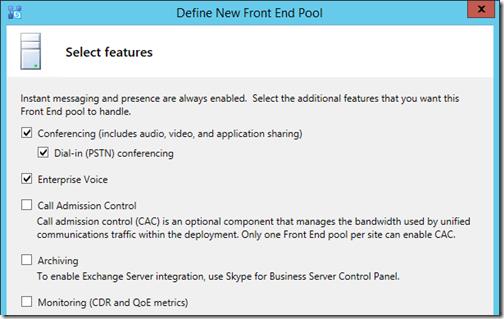 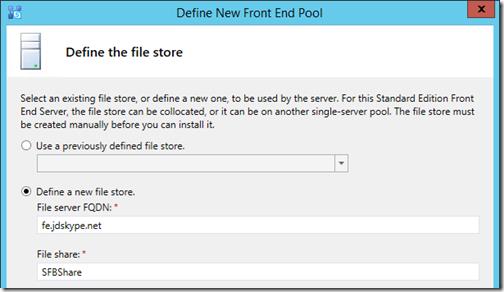 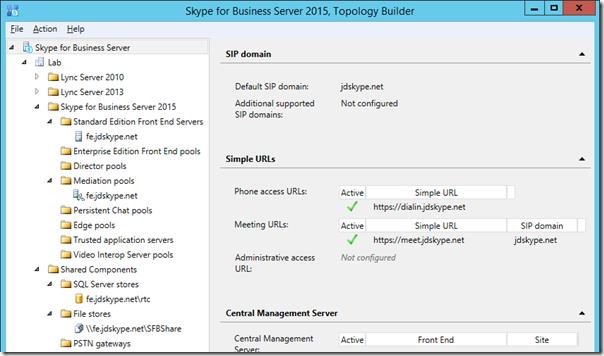 The final process is to publish the changes made to the topology into the Central Management Server database which also updates information in the RTC services container in Active Directory and sets up the folder structure and permissions on the file share.

Unlike most other Microsoft server platform products were installation of the actual server components is one of the very first steps, the Communications Server family has historically been different.  The server installation itself is quite hands-off and can be automated to a large degree.  The fair amount of activity up until this point has been geared around providing the backend components to store the overall configuration of the environment, which is now available for use by the server installation steps.

The next step is to install a second SQL Express named instance called RTCLOCAL on the local server which will contain a replica of the existing RTC named instance.

Only the first Standard Edition server in the organization would contain the authoritative RTC instance installed in the previous article, while all other Front End Servers (and even Edge Servers) would contain their own RTCLOCAL instance to replicate the Central Management Store data.

As the Administrative Tools have already been installed on the server then the Skype for Business Server Deployment Wizard can be found in the Start Menu on the local server.  The installation media is no longer required as the installation files have been copied to the server.

Reviewing the results in the execution window should confirm that the second SQL Express instance of RTCLOCAL was installed as well as the core SFB Server components.

Secondly the Local CMS replica was instantiated by importing the configuration from the existing CMS database an then replicating the database data itself.

Additionally the replication of any certificates stored in the CMS is performed.  Although no certificates have been installed yet for this deployment had there been one then this action would have replicated any existing OAuthcertificates required for server to server MTLS communications.

To confirm the installation location of the RTCLOCAL database files on the server check the default SQL Server installation directory for the existence of thefiles.

Once again the Bootstrapper application will execute and perform a prerequisite check before installing additional components.  These include a third SQL instance called LyncLocal and additional Windows Speech components and foreign language packs.

Immediately following will be the installation of the Lync server components which make up the different services and roles on the Front End server (e.g. AVMCU, Mediation Server). 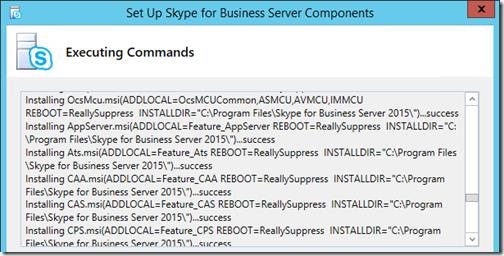 Verify that the installation task status was reported as successfully completed. 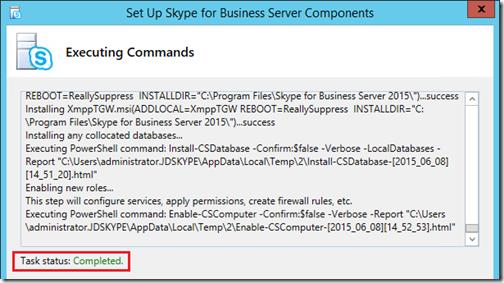 Returning to the server deployment process the next step is to request and assign server certificates so that the Lync services can be started.

If using an Enterprise Windows CA make sure that before any server certificates are requested that the guidance mentioned in the Environment section of the previous article is followed.  In order to properly support PowerPoint file sharing to any Office Web App attendees which are on workstations which are not domain-joined then the default Windows Certificate Authority configuration must be modified. 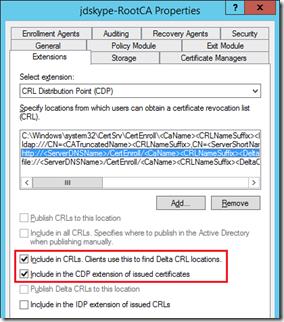 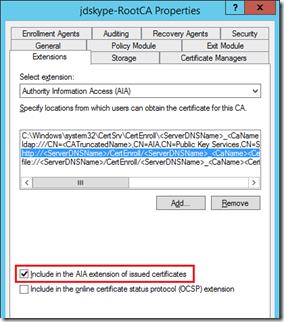 At this point any new certificate requests will include this critical information in the issued certificate. 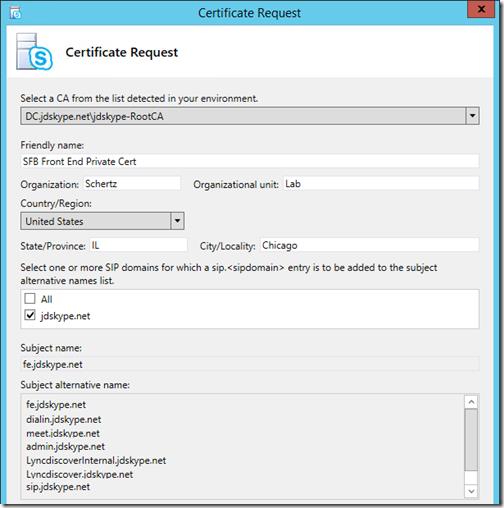 The Friendly Name can be set to anything and is not actually part of the certificate request, it can even be changed after the certificate is returned and imported.  Note that although Lyncdiscover.<sipdomain> was not defined as an internal DNS record in the previous article the certificate wizard still includes this FQDN as a requirement for external support. 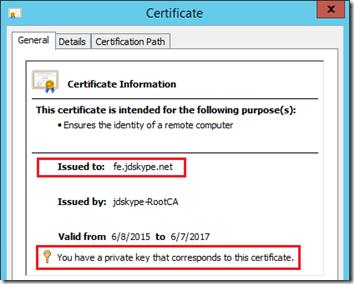 As this is the first SfB server deployed into the environment then a new OAuth certificate needs to be created as well.  This is a one-time process as this certificate will be shared by any other SfB server which may be later installed. 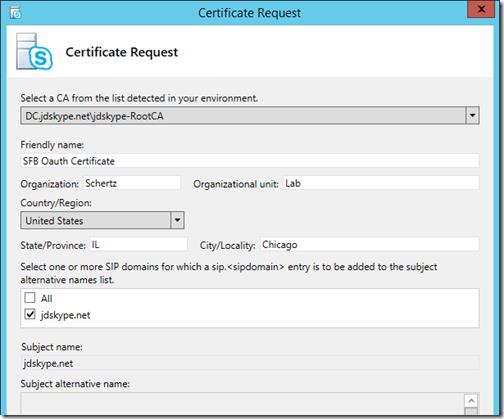 In previous releases the services could be started directly from the deployment wizard as part of Step 4: Start Services.  With the addition of a new PowerShell cmdlet in SFB this task is now a manual one.  While SfB Server now includes a new cmdlet called Start-CsPool this is only intended for use with multiple node Enterprise Edition pools.  When dealing with a single server in a pool or a Standard Edition server as in this article then the previous guidance of using the CsWindowsService cmdlets still holds true.

To validate the server status the Get-CsWindowsService cmdlet can be issued to list the individual SfB services.

Utilizing the Skype for Business Server 2015 Control Panel the basic functionality of the new deployment can begun to be tested.

Before opening the Skype for Business Server 2015 Control Panel, just as with previous Lync Server releases, it is helpful to configure the local server’s Internet Options to bypass the the prompt for credentials whenever the tool is launched. 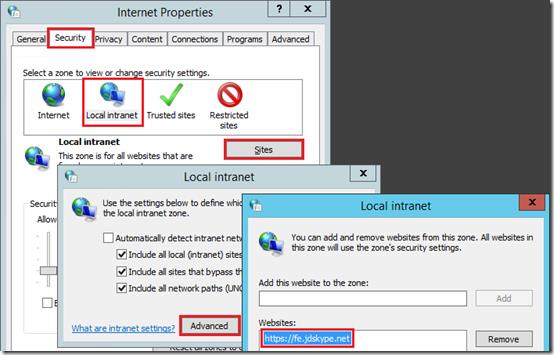 With the conclusion of this article a functional Skype for Business Server should now be deployed and is ready for further configuration.  The next article in the series will cover enabling a test user account and then progress on with deploying additional server roles like the Office Web Apps Server.

Filed under Skype for Business · Tagged with 2015, Deployment