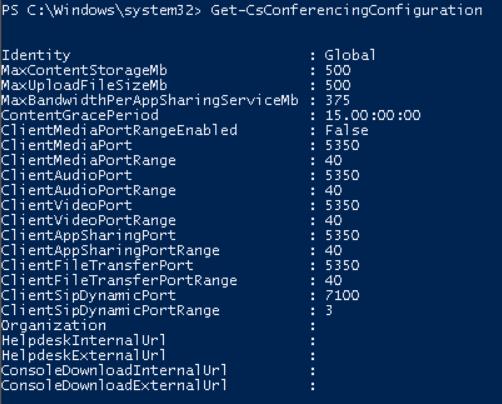 This is an updated article of my Lync 2013 Deep Dive

Conferences created within Skype for Business don’t last forever.  There is some point in time in which the information needs to be removed from the SQL Database Server to ensure it doesn’t last forever.  The following tables details how long a conference exists within the database.  Some changes have occurred since Lync Server 2013 and those are noted below as well.

Additionally, we can control the expiration time of meetings using the set-csconferencingconfiguration cmdlet.  You can see here:

It’s important to remember that the content grace period doesn’t happen until the meeting lifespan has expired.  That means, content for a meeting will last 365 Days + the Content Grace Period above.  Your data, might be sitting on your server for a very long time.

Activation of a Conference

All of this information can be found in the database as well.  As soon as a conference is activated, that information is placed into the RTCLocal | RTCDYN | ActiveConference database.  In my screen shot below, you can see that we have five active conferences.

Each column has a very specific purpose.  Here is a quick run down of each column.

The moral of this section is.  Once a meeting is joined, than we create an instance in the database for an active conference.  There are several moving parts to the creation of a conference.

Focus is a SIP endpoint that represents the actual conference in the system.  It’s job is a central gatekeeper.  It’s pretty much responsible for everything for the conference.  From authentication, requesting conferencing servers, etc.

Focus Factory handles the logical creation of deletion of conferences for scheduled meetings in the database.

Conferencing Server Factory determines the availability and health of the Conferencing Servers in the environment.  During the meeting creation process, it’s responsible for telling the Focus which servers to place which modalities on. Here is a great picture buried on one slide that was on the screen for about 7 seconds at Lync Conf 13. 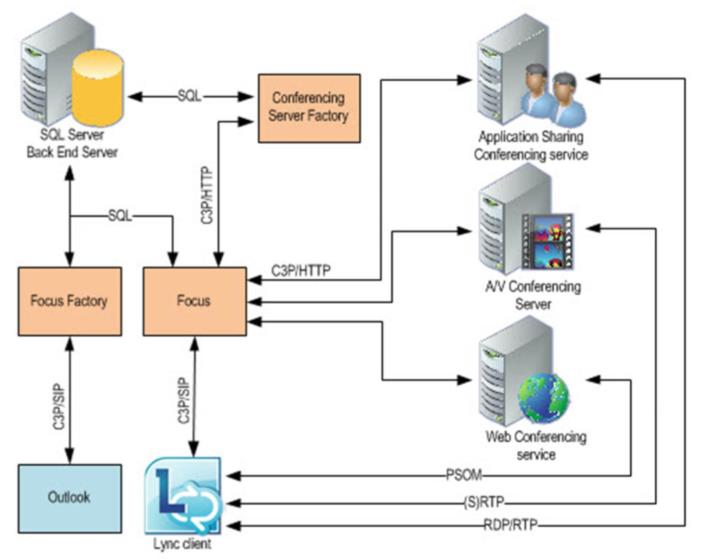 Here we can see how the communication is done between each of the different elements that goes into creating a conference.

Deactivation of a Conference

This is most likely a rarely used feature as it’s buried under the three dots (more menu) but from here is an option to End Meeting. 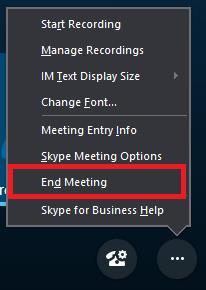 When this is done all users are immediately disconnected from the conference.  In the back ground, the client is sending an Exit and End Conference command to the Focus and it terminates all active Conference Servers and disconnects all users.

In this case, the organization of the meeting sends a cancellation notice and deletes a meeting.  If users are currently in the meeting, the Focus will immediately delete the meeting from all of the Conference Servers and all users will be removed from the conference.

NOTE: This would not apply to the users’ default meeting space.  If you want to test this you need to make sure to create a unique meeting space.

User is Deleted from Server

When a user is deleted from Lync, part of that process is to remove any active conferences that might be running in the background, and remove all users.

I mentioned this before but people most likely rarely use the End Meeting option.  What happens when everyone just leaves a meeting without ending it?  The meeting will remain in the background active.  This is done on the chance that you open up the meeting again immediately.  The exact timer surrounding this one is a bit of a mystery and I couldn’t find any documented values.  Based on my testing, is appears as though the Conferencing Announcement Services (CAS) remains in the conference for 20 minutes.

I often refer to this as the fantasy football draft rule.  You may recall in our database lookup above, within the ActiveConference table was a LastEnterpriseLeaveTime field.  This field maintains a roster of when the last authenticated user leaves a meeting.  At the 90 minute mark, the Focus will terminate the conference if no enterprise user joined the meeting or if all of the enterprise users have left.  It’s important to note that Federated and PSTN/Anonymous users are not considered enterprise users.

If we look at the SIP Message that is sent at the 90 minute mark, we can clearly see that the Focus is sending a BYE request to the conferencing announcement service (CAS).