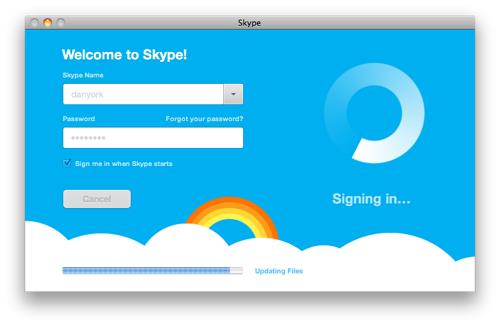 Could it really be true? Was Skype actually delivering a MacOS X version that was close to parity with the Skype for Windows version? After all the complaining we Mac users have done?

I say “for better or worse” because the initial reaction that pretty much every Mac user is going to have is:

With a new release, Skype naturally had to freshen up some of the graphics… so after you do the normal MacOS X drag-and-drop installation you have a sign-in screen with clouds, a rainbow and a spinning circle. It seems to need to update some files on your system first: 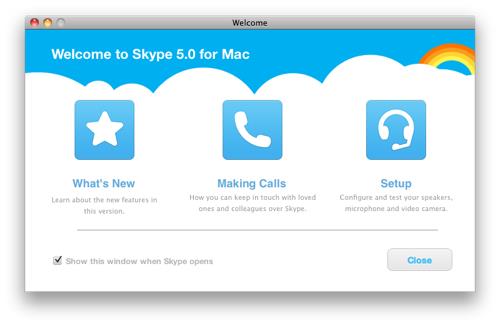 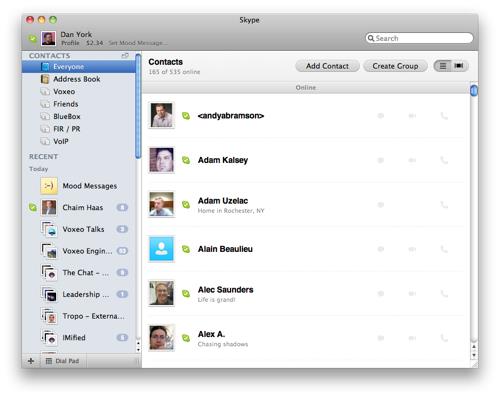 The view here (above) is showing my contacts in the main panel. In the left sidebar, I see “Everyone,” which is all my contacts, then “Address Book” which is (yea!) my regular MacOS X Address Book, and then my “Groups” of Skype contacts, which I had quite frankly completely forgotten about in the old UI.

When you move your mouse over a contact, you immediately get icons for the ways you can go and contact the person:

The down arrow next to the phone nicely lets you call people at their different phone numbers outside of Skype:

Like the older version, you can view the profile of a user (although the only way I found to do it was to Control+click their name in the contact list) – and it now pops up in the one window view:

And for those of you who are fans of the “cover flow” style of scrolling popping up in most Apple applications, there is a button in the upper right of a contact view that gets you this same experience. I’m not sure how useful it really is, but as eye candy it’s fun to have:

The “Search” box up at the top right is also very useful as it will pull up a list of contact and chats matching the string you enter in there.

The chat/conversation is, well, a chat interface. Not terribly different from the previous version, although there is more white space above and below messages. Someone probably thought this makes chats easier for newbies – and it perhaps does. But for many of the chats I’m in with many messages, I’ve found I’m scrolling more than before. 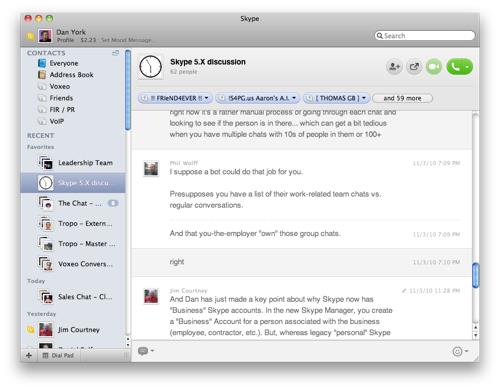 The left column has the biggest change. Chats now appear in a chronological list under “RECENT”. You can see that I have “Today”, then “Yesterday”, then it will go on down to “This Week” and “This Month”. (This screenshot was taken shortly after midnight, which explains why there is only one chat in “Today”.)

The seriously bad part about the “one window” paradigm is that:

All chats have to be in the same window! I dearly hope Skype will change this during the beta process and give us the ability to have chats out in separate windows… but for now, they are stuck in one windo.

The biggest change to making an actual call is that it is within the single window instead of popping up the separate window as it did previously:

The standard audio controls are in the upper right (although I didn’t find a way to quickly change the audio device settings, as there was in the previous version). The person’s avatar image would show in the middle of the screen if I were calling someone with one. 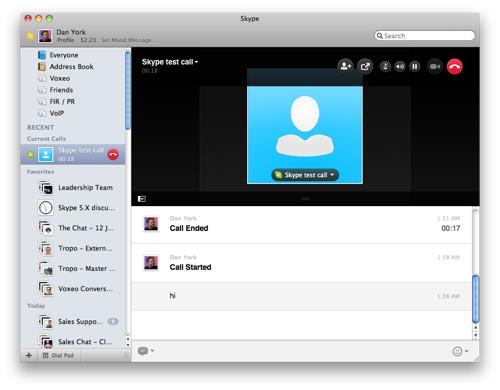 Another cool feature is that if you switch from Skype to another application while you are in a call, you get this slick “Call Monitor” window at the top of your screen that stays on top of all other windows:

Quite nice in that you don’t have the entire call window staying on top as you did with Skype 2.8.