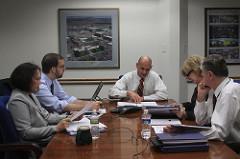 have just found a feature cool enough to get me to move over to Skype 5.0 for the Mac, despite my many concerns with it.

When you do that, everyone in the chat (using 5.0) gets a notification that there is a conference call and can choose to join into the conf call right then.

What’s even more cool is that the act of typing that command will generate a URL that you can simply pass along to anyone else to have them join a call. You’ll see the URL in your chat window. It takes the form (for me) of:

(assuming, of course, that they have Skype installed.)

What is also interesting is that you can name the conference by providing some text as a “token” to the “golive” command. Type in:

and the resulting URL will be:

So you could conceivably create multiple URLs that get passed around for different teams to use at different times.

To that point (creating multiple URLs), you do not need to use the /golive command. You can simply make up a URL using the format I’ve shown above:

You can then pass this URL around to anyone and they can click on it to jump into a call with you.

So “/golive” is simply a shortcut to get the call started by making your client automatically accept incoming connections.

Seeing It In Action

Here is a view of what a call looked like today:

It was somewhat curious in that a couple of us were streaming video (Dean Elwood and I, both on 5.0 for the Mac), while others were audio only. Phil Wolff (Skype Journal) was hosting the call, which you could only really tell from this icon by his name:

What was also curious was that people kept joining the conf call (we were experimenting with this in a chat that a number of us are part of), so you would see people appearing on the 5.0 client screen. As you can see here, the video for Dean and I dropped out… and then later came back in… that part was a bit strange.

Well, imagine if you are a team using a persistent group chat to keep in touch. At some point, it becomes apparent that it would be easier to just talk about an issue to sort something out. So someone in the chat just types:

and everyone who is available to join can join into the call by pressing the call button.

Today you can initiate a call to all members of a group chat, but that is the host calling ALL members of the chat right now. It rings everyone, regardless of whether they might be away or not… and you have to wait for people to accept or you have to hang up on those people you know are not around. Also, for much larger chats (say 100+ people), you simply can’t do a conf call out to everyone in the chat.

It also saves the host the effort of going through adding people individually to the call. They just do “/golive” and/or pass out the URL.

Or, you could just flip over to, say, the “Engineering chat” and type:

Whoever is available could then simply click that link to join into the conference call.

Going on from there… say you want to bring in someone who is outside your organization… you can just fire them a Skype IM saying:

I could also see this as an easy way to publicize “public conf calls”. Say that I wanted to have a public conf call related to this blog. I could promote in my sidebar of this blog that on, say, Tuesdays at 1pm, I would have a call at:

I could tweet that out… put it in blog posts… send it via email. And then at the given time I could accept the call and create the conf call.

What I like is the merging of the connections within Skype and also outside of Skype, i.e. you can pass the link in Twitter and have people join in.

Keep in mind when doing this the central caveat related to Skype audio conference calls:

Whatever computer is running Skype for the person who initiates the conf call becomes the “conference bridge”. It receives all incoming audio streams, mixes them together, and then sends the resulting combined stream back out to all participants.

The other detail is that the person initiating/hosting conf calls this way MUST have either Skype 5.0 for Windows or Mac… or some of the later builds of Skype 4.2 for Windows.

… will this be enough to bring me over to Skype 5.0 for the Mac full time? (I run it on a second computer and run Skype 2.8 on my laptop) Probably not, for a reason I’ll explain in another blog post and related to the somewhat crazy way I use Skype right now…. but it will definitely make me keep using Skype 5.0, and maybe I’ll get closer to making the move. 🙂