Microsoft has released version 4.2 of its VoIP and messenger application

Skype released for iOS. The update brings other minor bug fixes and some new features. As in all models of desktops ,Windows Phone and Android can now offer iOS users log in using their existing Microsoft account, thereby eliminating an additional registration with Skype. 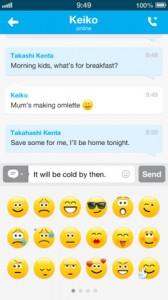 When using a Microsoft account contacts from Windows Live Messenger, Hotmail or Outlook.com are automatically linked to Skype.Thus, for chat via Skype about them directly.

Who yet has a Skype account, can it now without going through the website directly create the app. Also new is that allows stored phone numbers on the dialpad to edit the same.

There are also improvements in the instant message. Prolonged touching, they can now be modified. When writing a message recently emoticons can be selected. For devices with Retina display animated emoticons are also available.

As before, the Skype app also allows free calls and chats between Skype users, also an iOS or Android device using a Mac or Windows PC.For a fee (Skype Out) also led to calls to landlines and mobiles, and short messages are sent. Sending an SMS costs 12 cents in Germany. Abroad, it is advisable to use a WLAN access point, otherwise you may incur high roaming charges for data calls over 3G networks. In general, users who want to use Skype on your mobile device, have a data plan that allows VoIP services.

Skype 4.2 for iOS is free from Apple’s App Store or directly from skype.com / m on your iPhone, iPod Touch or iPad will be loaded. The app is 24 MB in size and requires at least iOS 4.3. It is also for the iPhone 5 optimized.