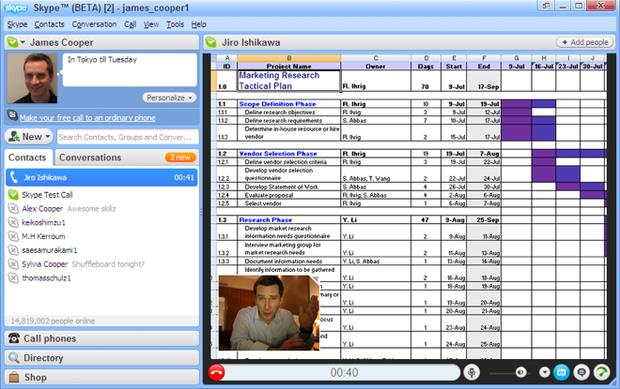 Skyper users, it seemed, either loved or hated the revamped Skype 4.0 for Windows. With Skype 4.1 beta (download), unveiled Wednesday, Skype hopes to earn a little more love by reinstating some beloved extras and adding one big new feature: screen sharing.

Skype’s screensharing feature is a clever addition to the VoIP communications application. In our tests it was engaging, especially when paired with Skype’s voice calling and chatting capabilities. The fair screen quality and few seconds of lag time won’t bother most casual users, but at this point we wouldn’t recommend Skype’s new feature for replacing a dedicated screensharing application or service for frequent collaborators. Skype’s screensharing is view-only; it is not a remote access tool like CrossLoop, which is geared for providing technical assistance. For demonstration purposes, however, Skype’s screensharing is just one more way to connect with faraway contacts.

Screensharing begins by clicking the “share” drop-down on a contact screen and choosing “Share your screen.” Skype then gives you the choice to record the full screen or a region. Pressing the button to initiate the screen share also launches an audio call. You can later resize by clicking and dragging the thick red borders. During a session, a button toggles you between full and partial screen modes. Because screensharing essentially broadcasts a video recording of your screen to your contact, you can’t place a video call and share the screen at the same time–you’ll choose one or the other.

It’s also worth noting that Skype’s screensharing feature, like many others, is unidirectional, view-only, and by invitation, which gives the host control over beginning and ending each session. With one-way viewing, your guest sees only the screen that’s bounded by the recorder’s borders. Because it’s unidirectional, Skypers won’t see each others’ screens simultaneously.

Skype’s screensharing addition begins to offer an inexpensive alternative for international business communications, though right now it works between two users–one host and one guest–at a time. You can switch roles easily and often. We’re guessing that the screensharing capability will be expanded in the future to group calls, so a host can share their screen with multiple recipients. (It will be interesting to see if Skype will then follow that enterprise breadcrumb to compete with well-known collaboration and Web meeting software in the future–but right now this is all conjecture.)

Skype 4.1 beta also reintroduces birthday reminder alerts and contacts-sharing, which were two features left out of Skype during its upgrade from version 3.8 to 4.0. Birthday reminders are automatic notices you receive on a contact’s birthday if they’ve added this information to their profile. The send-a-contact feature can be found in the Conversation navigation menu under the “Send” option.

Two other notable reinclusions are the ability to import contacts from Gmail, Windows Live Hotmail, AOL, and LinkedIn in addition to Skype 4.0’s support for Yahoo and Microsoft Outlook products; and a screen reader accessibility tool to help visually impaired people use Skype.

All these additions make Skype’s latest a substantial beta update. But since it’s in beta, there may be bugs and some stability issues–we experienced a couple crashes ourselves during testing. Frequent Skype users will want to experiment with 4.1 beta. So will those who have lamented the absence of birthday reminders, even if you don’t intend to use the screensharing feature.