Skype has finally released an update specifically optimized for Android tablets with 7- or 10-inch screens, with a few extra bonuses added on for good measure. As most of us know, Skype is a major cross-plaform audio and video chat app allowing Internet-connected users to connect with each other for free. But is Skype 3.0 for Android really all that it’s built up to be? 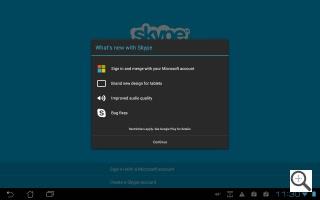 Application updates always seem to do better when released as a one-two punch. That’s probably the reason behind Skype‘s dual announcement around optimizing the layout scheme to make better use of the extra real estate on larger Android tablets while also improving audio call quality.

Citing the incorporation of an audio codec called SILK, the new Skype 3.0 is touted as delivering clearer, crisper audio quality — along with capably handling internet connectivity fluctuations to accommodate for the frequent slowdowns and dropouts traditionally inherent with mobile devices.

The latest application update followed fast on the heels of an announcement last month by Microsoft (which now owns Skype) that it’s putting Windows Live Messenger to bed after 12 long years of service. This gives stubborn holdouts one more reason to migrate to Skype (which, incidentally, also supports text instant messaging).

As a way of encouraging users to make the switch, 3.0 now also supports the ability to sign in using your Microsoft account, making the import of contacts a snap. But the reality is that there really shouldn’t be any need to twist anyone’s arm, not after a major app update. 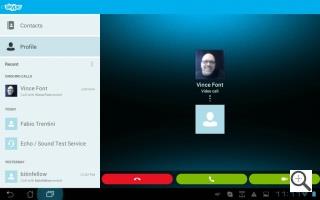 Skype 3.0 for Android works well on the whole, although it’s not without its flaws. The newly-redesigned platform looks good, responds well, and is easily intuitive.

On the down side, though, the claims of improved audio quality appear to be just that: claims. Although it’s admittedly impossible to perform comparisons between recent and previously held conversations, the sound quality I experienced seemed to have undergone no great leap in quality.

At first glance, Skype 3.0 for Android appears to have torn a page straight out of the Apple playbook — that is, if Apple can rightfully lay claim to owning the patent for grid-style layouts.

One of the first things you notice when you sign in to Skype 3.0 is the newly revamped Contacts list, which appears in grid layout complete with thumbnail images of each contact, the contact’s name, and online status. 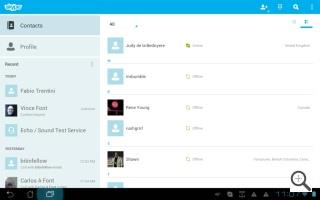 Tapping the alternate view button orients Contacts vertically in a slightly bland list view, but the good news is that even people with hundreds of online contacts won’t need to scroll too far to find their intended target.

Each screen is neatly divided, with the left third occupied by a column that enables you to toggle between Contacts and Profile view, also listing your most recent contacts in descending order.

The remaining two-thirds of the screen is reserved for detailed Contacts and Profile information, as well as for displaying video, audio, or text chat. Video chat can be maximized to full screen with a single tap.

Another feature new to Android tablet Skypers is the ability to engage your tablet’s rear-facing camera to broadcast a POV signal. This eliminates the need for guesswork any time you’re trying to give someone a virtual tour of your home or show off that fancy car. 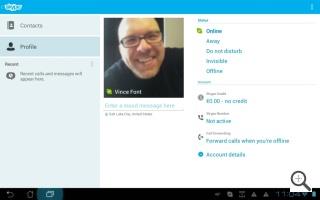 For the most part, toggling between the front- and rear-view camera works without issue, although in testing it tended to hang up occasionally. To its credit, however, the application recovered without crashing in these few and far between incidents.

The ability to send and receive files via Skype chat is another new feature of the updated tablet application. It operates simply and well. To send a file, all you need to do is tap the “plus” icon that enables text chat and choose “send file.”

Doing this automatically pulls up a directory from which you can choose to attach various file types. All file transfers are handled within the text chat window itself, and delivery — albeit slower for larger file types, which is to be expected — proved successful throughout repeated tests.

As a concept, Skype is an indispensible slice of technology useful not just for letting you make peer-to-peer phone calls without incurring a bill, but also for keeping you connected at great distances. By virtue of the fact that it’s free (with the exception of additional pay features like signing up for a dedicated phone number or buying minutes for Skype-to-phone conversations), Skype is also probably one of the most “forgiven” programs on the planet.

The new Skype 3.0 for Android helps push Skype toward higher quality on a major non-iOS mobile platform, with its improved layout, orientation for large-scale tablets, new file sharing capabilities, and rear-facing camera support. Still, the audio could stand lots more improvement, and you might experience hang-ups when toggling between the front- and rear-view cameras.

If Skype were a pay-only service, it would likely be out of business by now because of its ongoing imperfections. But being that it comes at just about zero cost, most of us are happy to shrug these off with the words, “What do you expect for free?”