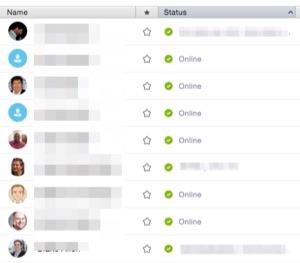 The fundamental challenge all of these applications face is this:

And where I say “talk” it could also be “chat” or “message” or… pick your communication verb.

The reality is that today we use several different tools for real-time communications … and that creates a bit of a frustrating user experience. If I want to send a message to Joe, do I send him a message on Skype? Facebook? WhatsApp? Google+? Twitter? SMS? iMessage? BBM? Wire? email?

By trial and error we start to figure out which of the people with whom we regularly communicate are available over which channels. Certain family members may be through Facebook… others through WhatsApp or Skype. Work colleagues through Jabber or Yammer… except for some of them who primarily use Skype. These friends detest Facebook and so they are in Google+ … and then there’s that guy who thinks all of these new apps are junk and only wants to talk to you via SMS and phone.

And every new app and service wants to fix it… and wants to be THE communications application/service that you use.

Over the years, I think it would be impossible to count the number of times we’ve seen new communications applications trumpted as “Skype-killers”. “This new app/service WILL be the one to replace Skype. It’s new. It’s better. It supports (something). Everyone will switch and the world will be so much better!”

Even when Skype’s audio quality is no longer what it once was.

Because Skype has a massive user directory. 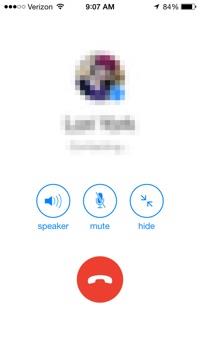 When it comes to a user directory, certainly one of the biggest in the world right now is Facebook. With over a billion users Facebook has an enormous ability to connect people together.

And now in many regions of the world, Facebook lets you initiate voice conversations through simply clicking on a telephone icon in the Messenger interface.

Facebook actually as two massive user directories if you consider that they also own WhatsApp and most stats right now say that WhatsApp has over 600 million users. (Which is actually more than Facebook Messenger, which recently crossed the 500 million user mark.)

P.S. And Facebook actually has a third user directory in the form of Instagram (which now has 300 million users)… but we’ve not yet seen them do anything with real-time communications there.

Google’s focus today seems to be on Hangouts, which is available from the desktop and also from the iOS and Android mobile platforms. While Hangouts started out inside of Google+, Google has separated the application out. I’ll note that just today they are rolling out a new version of Hangouts on Android that lets you add your phone number so that you are easier to find. They may at some point also integrate their Google Voice offering better into Hangouts.

It goes without saying that Apple has its own massive directory from the hundreds of millions of iPhone and Mac users, almost all of whom get integrated into Apple’s iMessage and Facetime services through their Apple ID. With iMessage and Facetime, Apple’s directory includes my own phone number, as well as my email addresses.

The point is that Apple can do all this and make it so simple because they have this massive user directory.

While we in North America don’t tend to know their names, there are apps building huge user directories in Asia. WeChat, based in China, now has over 468 million monthly active users worldwide. LINE, out of Japan and used in much of Asia, has over 170 million monthly active users. There are others such as KakaoTalk in Korea that have large directories.

Of course, the original user directories for mobile phone users reside with all of the mobile service providers / telephone companies. They have the customer names and phone numbers. Their challenge is one of sharing that information between each other – and also their general challenges with embracing the world of OTT communications apps that threaten their basic revenue streams.

I should note that Telefonica is doing some great work in the WebRTC space and is involved with Mozilla’s latest Firefox Hello effort. There are other traditional carriers who are also doing some good work with WebRTC and other OTT works … but I’ve still not really seen any of them figure out how to tie their apps and services back to the large user directories they collectively have.

Notice a common thread across all of these directories?

They are all about the “lock-in”.

A better way to say it would be:

They want to own the directory. They want to be THE source of “identity” … but that’s a topic for yet another post.

(NOTE: This is not a new problem – I wrote about “walled gardens” back in 2007 with regard to email and messaging – some names have changed but the problem remains.)

Amidst all this we’ve seen various attempts to provide a global directory for IP communications. ENUM was one in the open standard space, but the original vision of “public ENUM” ran into a barrage of security and privacy issues and faded from view. (ENUM is still heavily used within SIP-based networks either within telcos or within peering relationships between telcos.)

The question with all of these is how to make the directory accessible to other entities in a secure fashion – and how to deal with privacy issues, telemarketers, spammers, attackers, etc.

How, then, does a new startup like Wire or Talko or Firefox Hello or whoever-releases-their-WebRTC-app-today build up a significant enough directory of users so that the application is usable by large numbers of people?

What I do know is that, as I said in my initial thoughts on Wire, “my iPhone is littered with the dead carcasses of so many other apps that have launched trying to be THE communication platform we all want to use.”

Some apps/services may make it easy for you to “find your friends” through using your “social graph”… the connections you have on Facebook, Google, etc.

I don’t know the answer… but I see this as a fundamental challenge for any new entrant in the space. How do they gain the directory of users so that people will be able to communicate with others using this new service?

Unless, of course, they just want to be happy as a smaller, more niche player.

A Final Thought – The Bigger Picture

Let me end with one thought… this “directory problem” is in fact tied to the larger challenge of “identity” on the Internet. Back in the pre-Internet days our “identity” for real-time communications was simple – our telephone number. We might have had several phone numbers, but they were ours and they were/are globally unique and globally routable.

BUT… when we’ve moved to IP-based real-time communications, first with instant-messaging / chat and then with voice and video, we’ve also moved into a realm of fractured identities and identifiers with, as noted above, many different companies vying to have us use their system so that their directory is the most complete and comprehensive.

I’d like to hope that we’ll arrive at some form of distributed and decentralized identities and directories that can be federated together so that people can find each other. (Which is why I’m intrigued by what the Matrix.org folks and others are doing.) I do worry, though, that the financial incentives are there for the larger corporate players to fight each other for dominance… and leave us regular users of the Internet without a choice.