Charges Against Former KOA, Denver Host Steffan Tubbs Dropped.  The charge of suspicion of domestic violence, disturbance by phone filed against Steffan Tubbs back in July cost him his job as co-host of “Colorado Morning News” at iHeartMedia’s news/talk KOA, Denver.  Yesterday, he revealed via social media that the charge has been dropped by prosecutors.  Denver alt-weekly Westword reports that the charge stemmed from his July 30 arrest for the content of voice messages that contained “vulgar language” with the “intent to annoy the victim.”  Tubbs reportedly had been in a relationship with the person for a period of time.  Saying he is the victim of domestic abuse, he Tweeted a photo of himself wearing a purple tie with the caption, “Always innocent. Prosecutors dismissed charges against me today. I wore this on #PurpleThursday for all DV victims, including me. End it.” See the Westword story here.

Former Producer Sues St. Louis Talker Frank O. Pinion.  The unnamed plaintiff alleges that St. Louis talk host Frank O. Pinion discussed the plaintiff’s stint in a rehab facility on his radio show on several occasions, thereby violating his privacy.  The allegations stem from Frank O. Pinion’s time at CH Holdings’ KTRS, St. Louis (named as a co-defendant for failing to prevent the O. Pinion from talking about the matter).  O. Pinion, a.k.a. John Craddock, was not an employee of KTRS.  He brokered his show and the plaintiff was his employee.  (He currently is brokering his services to crosstown KFNS-AM.)  In the complaint, the plaintiff says that while in a rehab facility in August, he heard that his situation was being discussed by O. Pinion and it was also being posted on social media.  He’s seeking “in excess of” $50,000.  Read the St. Louis Post-Dispatch coverage here.

Boston Herald Radio Talk Show Host, Adriana Cohen’s Star Continues to Rise.  Boston Herald newspaper columnist and Boston Herald Radio conservative talk show host Adriana Cohen has been added to Creators Syndicate’s all-star lineup boasting 44 million daily readers.  She will continue to write her popular exclusive columns for the Herald as well.  Boston Herald editor-in-chief Joe Sciacca tells TALKERS, “We’re very proud of Adriana’s work and so pleased she is getting this well-deserved national recognition.”  David Yontz of Creators Syndicate describes ­Cohen’s column as “dynamic, provocative and thoughtful.” He adds, “Hers is an important voice in today’s political climate.”  In today’s Herald Cohen says, “I’m proud that in the very liberal state of Massachusetts I have not been afraid to support our president or express my conservative opinions. I’m equally proud of the Herald, our top-notch editors and publisher for truly protecting free speech by not muting me or watering down my opinions in fear of losing readers or offending someone.  The fact that a conservative columnist’s content is resonating, even in the bluest state in the nation, is proof that there is a strong thirst for diverse opinions beyond what educational institutions and mainstream media spoon-feed us on a daily basis.”  In addition to her column, Cohen is host of Boston Herald Radio’s “The Adriana Cohen Show.” She is a regular guest on Fox News and mentors Harvard University female undergraduate business students.

One music format stations, and Cumulus-owned stations for air the weekend of Veterans Day.  In their own voices, combat veterans share their stories with Vietnam War veteran and Westwood One talk host Jim Bohannon, and former Westwood One executive, White House press secretary, and NBC News Vietnam War correspondent, Ron Nessen. Bohannon will look back 50 years on his own war experience and will cull new perspectives on the war in assorted interviews, including one with filmmaker Ken Burns, director of the recently broadcast, 10-part documentary, The Vietnam War. 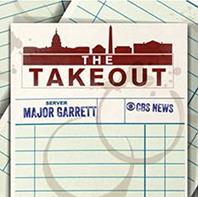 weekly, one-hour program about politics, policy and pop culture.  The show was a podcast first and launches on radio tonight at 10:00 pm ET.  This show is produced in a casual atmosphere – each episode recorded over a meal in a Washington, DC restaurant.  Recent guests have included: Mick Mulvaney, director of the Office of Management and Budget; Sen. Chris Murphy (D-CT); Sen. Amy Klobuchar (D-MN); Rep. Will Hurd (R-TX); Sen. Al Franken (D-MN); Carly Fiorina; Gov. Martin O’Malley (D-MD); Corey Lewandowski; and comedian Samantha Bee.  Tonight’s guest is Secretary of Energy Rick Perry.  Garrett says, “‘The Takeout’ is a conversation, not an interrogation.  And we edit nothing.  Our guests never have to fidget about context.  They are heard fully.  We discuss news of the week and try to translate Beltway buzzwords so America can join the conversation.  I never stop learning from and enjoying this humble audio odyssey.”  It’s debuting on CBS RADIO’s KMOX, St. Louis; WCCO-AM, Minneapolis; KXNT, Las Vegas and others.

TALKERS News Notes.  WABC, New York is adding a new show to the Sunday evening lineup featuring New York businessman Tom Maoli as host.  Titled, “Go Big or Go Home,” the program gives Maoli the platform to “spread his entrepreneurial, business and lifestyle messages to listeners all across the Northeast.”  Maoli says, “I was approached by WABC to do a radio show.  At first, I was unsure, but the more I thought about it, I began to think that with so many young people, not to mention mid-career executives, starting to think about starting their own businesses, the idea of doing a radio show would provide me with an opportunity to reach that audience and tell them about my story and how they can do the same.”  The program airs on the Cumulus Media news/talker at 7:00 pm.…..It’s a homecoming for the radio stations owned by News-Gazette Media in Champaign, Illinois as its three radio stations move into the same building with the News-Gazette newspaper.  Seventy years ago, WDWS-AM was co-located with the newspaper, but not since then.  Now, news/talk WDWS – named for then-publisher of the News-Gazette, David W. Stevick – along with sister stations adult contemporary WHMS and classic hits WKIO are moving into new, digital studios…..SiriusXM and Formula 1 announce a new, multi-year deal for the former to serve as the exclusive North American radio broadcaster of all Formula 1 races, starting with this weekend’s United States Grand Prix from Austin, Texas.  Listeners will hear the BBC 5 live radio broadcast for the races.

Trump Tax Reform Top News/Talk Story for Week of October 16-20. The effort of the Trump Administration to present its tax reform plans was the most-talked-about story on news/talk radio this week, landing in the #1 position on the Talkers TenTM.  At #2 this week was the deaths of four American servicemen in the deadly ambush in Niger and the related controversy over presidential condolences to the families of fallen soldiers. Coming in at #3 was the Harvey Weinstein sexual predation scandal and the #MeToo movement, followed by North Korea’s threats against the U.S. at #4.  The Talkers TenTM is a weekly chart of the top stories and people discussed on news/talk radio during the week and is the result of ongoing research from TALKERS magazine.  It is published every Friday at Talkers.com.  View this week’s entire chart here. 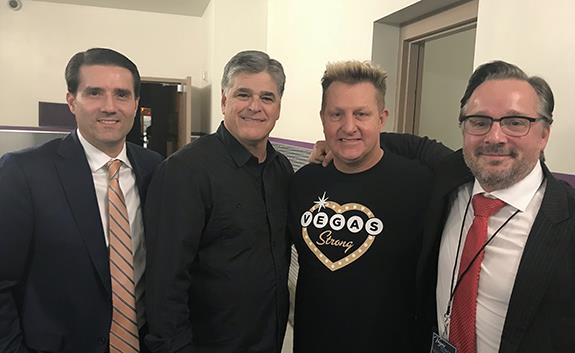 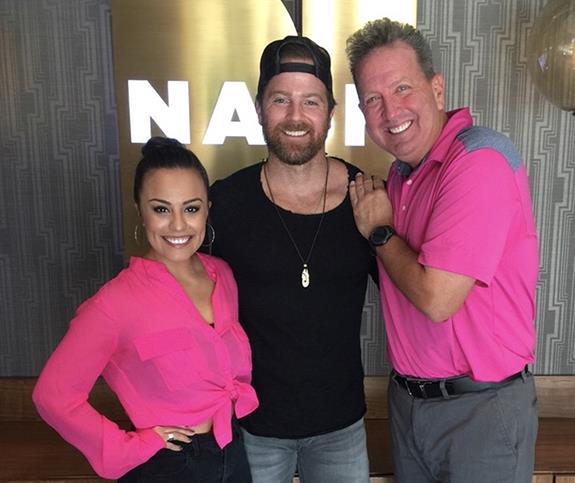 Kip Moore Drops by ‘NASH Nights Live.’  Country artist Kip Moore (center) poses for a pic with “NASH Nights Live” hosts Elaina Smith (left) and Shawn Parr (right).  Moore stopped by the show to talk about “everything from his latest single to Halloween.”  Parr and Smith are decked out in the pink they were wearing to a breast cancer awareness event.

More Music Radio News and Career Moves.  Country legend and radio personality Kix Brooks is hosting Westwood One’s tribute to the men and women throughout America’s history who served and are still serving in the U.S. armed forces.  The program is “A Salute to Our Military Veterans,” and is available for air Friday, November 10 through Sunday, November 12.  Brooks is joined by friends including: Brad Paisley, Tim McGraw, Chris Young, Dierks Bentley, Rascal Flatts, and more, who talk about their appreciation for the nation’s military…..SiriusXM announces a performance by Grammy Award-winning superstar Kelly Clarkson at a special, invitation-only show for SiriusXM listeners on Friday, November 3.  The performance will take place at the Highline Ballroom in New York City and will feature songs from her new album, Meaning of Life, along with some of her biggest hits.  The performance premieres on Wednesday, November 8 at 5:00 pm ET on SiriusXM Hits 1.